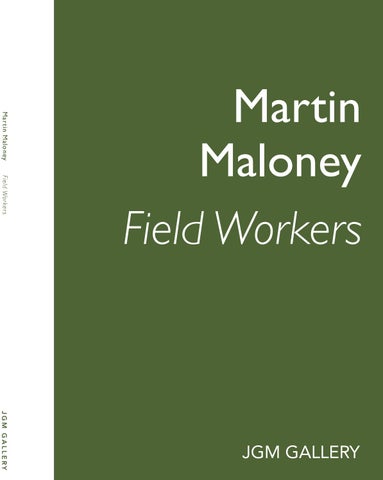 Sex in the City by Charlotte Mullins

I am very excited to present Martin Maloney’s ‘Field Workers’ at JGM Gallery. This series of paintings, made in 2013 and shown in public for the first time here, are incredibly vibrant, radiating energy through their colour and texture. They are shown alongside the series of collages that were their creative starting point; the artist describes the collages as ‘recipes’ for the paintings. In this way, the exhibition gives an insight into Maloney’s creative process, offering the viewer a deeper understanding of the ‘Field Workers’ paintings. I vividly remember my first visit to Maloney’s studio. Arriving at the large warehouse space in South London, I was immediately struck by the intensity of a large portrait work which was leaning against a wall. There were so many interesting things to look at. When I was there, he was painting and firing tiles - testament to the variety and ceaseless energy that drives his work. From that point on, I was very keen to bring his work to the gallery. It has given me great pleasure to see the ‘Field Workers’ exhibition take shape, and I look forward to introducing these works to a wider audience. I am very grateful to Martin for agreeing to present the works here. I would also like to mention Charlotte Mullins’ new essay written for this catalogue, which does a brilliant job of establishing the art historical context of ‘Field Workers’.

I hope you enjoy this significant body of work as much as I do.

Sex in the City by Charlotte Mullins

Martin Maloney’s ‘Field Workers’ stand totemic, mesmeric, larger than life and scantily clad, eyeing you up as the wind tousles their hair and jingles their earrings. Ten women look down, look out, some smiling coyly, some grimacing, others staring mournfully into the distance. Busy patches of orange and yellow, turquoise and sage, mud brown and lip red bloom around them and the women strike poses against this vertiginous, riotous melange of colour. The backdrop approximates landscape and yet the marks cling to the surface, refusing to give up their painterly origins while simultaneously suggesting a vista of wild flowers, wheat fields, tulip rows and ploughed furrows. There’s an innate feeling for colour and pattern reminiscent of Matisse [French Marigold] and Van Gogh [Siberian Wallflower]. In places the fecund landscape is so excitable it transgresses the women’s bodies, as in Baba Yaga and Fat Hen, where pink flesh yields to brushstrokes that evoke grassy banks and fields of ripened corn.

The not-quite nudes stand in bra and pants, their high heels and necklaces drawing attention to bare thighs and midriffs, exposed breasts and painted lips. Hands on hips, legs bent, heads cocked to one side, they mimic celebrity poses of sexual display, hungry for our attention. They understand their nudity and control it, using vestiges of clothing to enhance their nakedness like the translucent veils and elaborate gold chains adorning Cranach’s sixteenth-century Venuses or the black choker and satin mules worn by Manet’s Olympia (1863). Maloney turned to some of the oldest depictions of women in art, such as the Venus of Willendorf (c. 25,000 BCE), as a starting point for this series. He was looking to breathe life into what is now considered to be a rather unfashionable subject, the female figure in the landscape. He also riffs on the last 150 years of art history and everything from Matisse’s Luxe, Calme et Volupté (1904) and Picasso’s Demoiselles d’Avignon (c. 1905) to De Kooning’s Woman I (1950–52) is thrown into the mix. Despite this historical engagement Maloney always refracts his enquiry through the lens of contemporary life and the women in these paintings are drawn from memories of sex workers he saw lining the roadside on the outskirts of a small Slovakian town. Their juxtaposition with the verdant Slavic countryside could be seen to position them as emblems of fertility but their awkward clunkiness, all oversized features and accentuated assets, knock–kneed and cross–eyed, suggests a more melancholy reason for their exposure. 9

The series ‘Field Workers’ was completed in 2013 and comprises ten large-scale paintings and ten related drawings. It builds on the intricate collaged paintings seen in the 2008 series ‘Actress Slash Model’ by again using collage as a starting point. Collage insists on a surface’s inherent flatness – it pushes away from the canvas or support and into our space. Even when collectively the triangles and rhomboids appear to fuse into arms, legs, eyes and breasts the surface still retains its integrity as a flat picture plane. The ‘Actress Slash Model’ paintings [eg Actress/Model #2 ‘Melody, Harmony, Chastity’] featured young women in patterned knickers and bunched hair, posing nervously, skittishly, provocatively. Yet each figure threatened to dissolve into abstract accumulations of form, pattern and colour at any moment. This charged territory between abstraction and figuration, between surface aesthetics and emotional depth, is something that has preoccupied Maloney throughout his career. It is the tension between these two states that draws him to the work of De Kooning and Twombly, to the nearabstraction of Picasso’s Cubist portraits and the all-over surface pattern of Vuillard. In ‘Actress Slash Model’ the tautness between figuration and abstraction exists within each collaged figure; in ‘Field Workers’ Maloney focussed primarily on the background. He tessellated the surface with fragments taken from earlier drawings that had not made the grade. Using this wealth of recycled material he accessed a wide range of mark-making with the snip of his scissors, jump-cutting styles and patterns in an increasingly inventive way. In the drawing Pandora rectangular chunks of coloured rubbings butt up alongside sketched floral shapes and sections of green wash. In Youth an androgynous figure in vest and pants has been drawn over a patterned grid that includes squares teeming with blue dashes, blocks of sunshine yellow and scribbled patches of brown and red. (Looking at Maloney’s work often feels like flicking through a history book: the intensity of marks seen in Van Gogh’s ink drawings haunt Youth; the hot limes, viridians, fuchsias and lemons of Hockney’s iPad drawings are sensed in Pandora.) Maloney describes his ‘Field Workers’ drawings as ‘recipes’ for his subsequent paintings. After completing each drawing he then transcribed into oils, painting the wildly different surface effects and patterns as 10

faithfully as he could. At times, as with Pandora, the translation intensified a narrative reading of the background as landscape. In Roxy, however, a small triangle of collaged purple flowers just above the slick of yellow hair became a floral fascinator, transferring its allegiance from landscape to figure. Such intentional pictorial slipperiness recalls Cézanne’s Still Life with Plaster Cupid (c. 1894), a masterpiece of perceptual expectation and denial, while Cézanne’s ‘Bathers’ speaks to the series as a whole, where figures and landscape interlock harmoniously fusing woman and nature while irrevocably flattening the picture plane. Maloney talks of the coolness of collage, how working with scissors to cut and lay shapes takes the heat out of his work and allows a rationality that doesn’t exist when he is painting. Painting, he says, is like an orchestra with all the instruments playing at once or a house that is on fire. Most paintings he makes are finished in a single day. For ‘Field Workers’ however Maloney noticed a change in pace, a new level of control that had to be brought to bear on his brush. He realised it would be hard to replicate the spontaneity of the original marks or the collage’s various juxtapositions. Many of the marks on the drawings were not ones he had ever thought to make in paint. Others were altered by the translation: Baba Yaga became more knowing as her almond eye narrowed; Valley Girl grew heels and switched personality from curious and assertive to sad and distant. They became hybrids, fictions, their bodies transposed from drawings, themselves palimpsests of mark-making. Should we feel sorry for these women, for the remote valley girl or the Siberian wallflower? At times the landscape threatens to engulf them as they balance on kitten heels or perform for passers by [Adieu]. Yet despite their need to work the Slavic roadside and the landscape’s pictorial dominance these women stand tall. They exist of and for themselves, on the paper and the canvas, each version as real as the next despite their translation from one medium to another. Maloney’s ‘Field Workers’ speak of life at its most essential, of sexual display, fecundity and procreation. They also communicate the pure joy of placing one colour next to another, lemon spliced on to mauve, orange over turquoise [Acid Lover], whorls and stripes and dashes and smears celebrating the innate life force of painting itself. 11