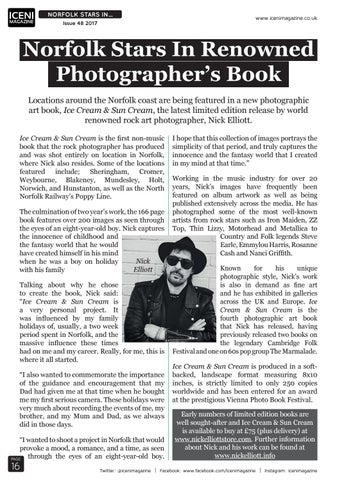 Norfolk Stars In Renowned Photographer’s Book Locations around the Norfolk coast are being featured in a new photographic art book, Ice Cream &amp; Sun Cream, the latest limited edition release by world renowned rock art photographer, Nick Elliott. Ice Cream &amp; Sun Cream is the first non-music book that the rock photographer has produced and was shot entirely on location in Norfolk, where Nick also resides. Some of the locations featured include; Sheringham, Cromer, Weybourne, Blakeney, Mundesley, Holt, Norwich, and Hunstanton, as well as the North Norfolk Railway’s Poppy Line. The culmination of two year’s work, the 166 page book features over 200 images as seen through the eyes of an eight-year-old boy. Nick captures the innocence of childhood and the fantasy world that he would have created himself in his mind Nick when he was a boy on holiday Elliott with his family Talking about why he chose to create the book, Nick said: “Ice Cream &amp; Sun Cream is a very personal project. It was influenced by my family holidays of, usually, a two week period spent in Norfolk, and the massive influence these times had on me and my career. Really, for me, this is where it all started. “I also wanted to commemorate the importance of the guidance and encouragement that my Dad had given me at that time when he bought me my first serious camera. These holidays were very much about recording the events of me, my brother, and my Mum and Dad, as we always did in those days. “I wanted to shoot a project in Norfolk that would provoke a mood, a romance, and a time, as seen through the eyes of an eight-year-old boy. PAGE

I hope that this collection of images portrays the simplicity of that period, and truly captures the innocence and the fantasy world that I created in my mind at that time.” Working in the music industry for over 20 years, Nick’s images have frequently been featured on album artwork as well as being published extensively across the media. He has photographed some of the most well-known artists from rock stars such as Iron Maiden, ZZ Top, Thin Lizzy, Motorhead and Metallica to Country and Folk legends Steve Earle, Emmylou Harris, Rosanne Cash and Nanci Griffith. Known for his unique photographic style, Nick’s work is also in demand as fine art and he has exhibited in galleries across the UK and Europe. Ice Cream &amp; Sun Cream is the fourth photographic art book that Nick has released, having previously released two books on the legendary Cambridge Folk Festival and one on 60s pop group The Marmalade. Ice Cream &amp; Sun Cream is produced in a softbacked, landscape format measuring 8x10 inches, is strictly limited to only 250 copies worldwide and has been entered for an award at the prestigious Vienna Photo Book Festival. Early numbers of limited edition books are well sought-after and Ice Cream &amp; Sun Cream is available to buy at £75 (plus delivery) at www.nickelliottstore.com. Further information about Nick and his work can be found at www.nickelliott.info 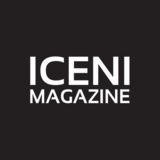