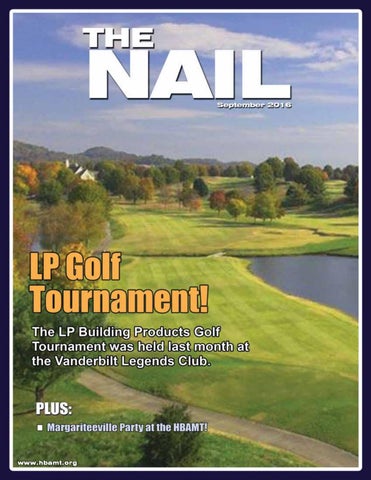 The 2016 Golf Kick-off Party was a funfilled, Caribbean flavored affair last month at the HBAMT offices!

The 2016 LP Building Products Golf Tournament teed off last month at the Legends Golf Club in Franklin resulting in a full dayâ&#x20AC;&#x2122;s worth of big winners. An equally big thanks to our title sponsor LP Building Products and to all our event sponsors (see page fifteen)!

ales of newly built, single-family homes rose 12.4 percent in July from a downwardly revised June reading to a seasonally adjusted annual rate of 654,000 units, according to newly released data by the U.S. Department of Housing and Urban Development and the U.S. Census Bureau. This is the highest reading in almost nine years. “This rise in new home sales is consistent with our builders’ reports that market conditions have been improving,” said NAHB Chairman Ed Brady, a home builder and developer from

This uptick in demand should translate into increased housing production throughout 2016 and into next year. 6 The NAIL

Bloomington, Ill. “As existing home inventory remains flat, we should see more consumers turning to new construction.” “July’s positive report shows there is a need for new single-family homes, buoyed by increased household formation, job gains and attractive mortgage rates,” said NAHB Chief Economist Robert Dietz. “This uptick in demand should translate into increased housing production throughout 2016 and into next year.” The inventory of new homes for sale was 233,000 in July, which is a 4.3-month supply at the current sales pace. The median sales price of new houses sold was $294,600. Regionally, new home sales rose by 40 percent in the Northeast, 18.1 percent in the South, and 1.2 percent in the Midwest. Sales remained unchanged in the West. n

ationwide housing starts rose 2.1 percent in July to a seasonally adjusted annual rate of 1.21 million units, according to newly released data from the U.S. Department of Housing and Urban Development and the Commerce Department. This is the highest reading since February. Multifamily housing was up 5 percent to a seasonally adjusted annual rate of 441,000 units in July while single-family production edged up 0.5 percent to 770,000 units. “New household formations are upping the demand for rental housing, which in turn is spurring the growth of multifamily production,” said NAHB Chairman Ed Brady. “Meanwhile, single-family housing continues to hold firm.” “Single-family starts, on a year-to-date basis, are up 10.6 percent and builders are cautiously optimistic about market conditions,” said NAHB Chief Economist Robert Dietz. “However, the permit trends indicate that supply-side headwinds, such as shortages of lots and labor, continue to affect the housing sector.” Regionally in July, combined single- and multifamily starts increased in the Northeast, Midwest and South, with respective gains of 15.5 percent, 2.3 percent and 3.5 percent. The West registered a 5.9 percent loss. Overall permit issuance inched down 0.1 percent to a seasonally adjusted annual rate of 1.15 million. Multifamily permits increased

6.3 percent to a rate of 441,000, while single-family permits fell 3.7 percent to 711,000. Permit issuance increased 10.5 percent in the Midwest and 2.6 percent in the South. Meanwhile, the West and Northeast posted respective losses of 8 percent and 10.2 percent. Builder confidence rises two points Builder confidence in the market for newly constructed single-family homes in August rose two points to 60 from a downwardly revised reading of 58 in July on the NAHB/Wells Fargo Housing Market Index (HMI). “New construction and new home sales are on the rise in most areas of the country, and this is helping to boost builder sentiment,” said Brady “Builder confidence remains solid in the aftermath of weak GDP reports that were offset by

HOI down three percent in second quarter of 2016

olid home price appreciation more than offset a modest reduction in mortgage interest rates to push housing affordability lower in the second quarter of 2016, according to the NAHB/Wells Fargo Housing Opportunity Index (HOI) released recently. “Firm job growth, historically low interest rates and healthy price appreciation in many markets are all positive signs that the housing recovery continues to move forward,” said NAHB Chairman Ed Brady. “At the same time, regulatory hurdles and rising costs for buildable lots and skilled labor continue to put upward pressure on the cost of building a home.” “Though we have seen a modest drop in affordability in the second quarter, the HOI is still fairly high by historical standards,” said NAHB Chief Economist Robert Dietz. “Ris-

ing employment, favorable mortgage rates and increasing household formations will keep the housing market on a gradual, upward path during the rest of the year.” In all, 62 percent of new and existing homes sold between the beginning of April and end of June were affordable to families earning the U.S. median income of $65,700. This is down from the 65 percent of homes sold that were affordable to median-income earners in the first quarter. The national median home price increased from $223,000 in the first quarter to $240,000 in the second. Average mortgage rates dropped from 4.05 percent to 3.88 percent in the same period. For the third consecutive quarter, Youngstown- Warren-Boardman, Ohio-Pa.

positive job growth in July,” said Dietz. “Historically low mortgage rates, increased household formations and a firming labor market will help keep housing on an upward path during the rest of the year.” Derived from a monthly survey that NAHB has been conducting for 30 years, the NAHB/ Wells Fargo Housing Market Index gauges builder perceptions of current single-family home sales and sales expectations for the next six months as “good,” “fair” or “poor.” The survey also asks builders to rate traffic of prospective buyers as “high to very high,” “average” or “low to very low.” Scores for each component are then used to calculate a seasonally adjusted index where any number over 50 indicates that more builders view conditions as good than poor. Two of the three HMI components posted gains in August. The component gauging current sales conditions rose two points to 65, while the index charting sales expectations in the next six months increased one point to 67. The component measuring buyer traffic fell one point to 44. Looking at the three-month moving averages for regional HMI scores, the South registered a two-point uptick to 63, the Northeast rose two points to 41 while the West was unchanged at 69. The Midwest dropped two points to 55. Editor’s Note: The NAHB/Wells Fargo Housing Market Index is strictly the product of NAHB Economics, and is not seen or influenced by any outside party prior to being released to the public. HMI tables can be found at nahb.org/hmi. More information on housing statistics is also available at housingeconomics.com.. n

The annual golf tournament kick-off party was a real blast this year as MargariTEEville hit the HBAMT offices Wednesday, August 10th! Steel drums, margaritas, cold beverages and a cool Caribbean vibe helped turn the association into a terrific island party worthy of its name. A big thanks to Superior Walls for sponsoring the event. And thanks also to Summit Funding, Benchmark Realty and Carbine Development for sponsoring the margarita and beverages bars, Cenwood Appliance, and to everyone who donated to the always successful silent auction! n

he LP Building Products Golf Tournament was held Thursday, August 11 at the Legends Golf Club in Franklin. Over two-hundred golfers teed off during the tournament which featured the now annual “helicopter golf ball drop” from Helistar Aviation. The copter made the drop between the morning and afternoon rounds at the Legend Pavilion resulting in the number nine golf ball rolling closest to the hole to make Ron Schroeder the big winner of the contest.

Ben Fehr from the Seagull Electric foursome made the biggest shot of day, a hole in one on hole number nine that earned him $20,000 towards a new Cadillac from Andrews Cadillac. Congratulations Ben! The top score of the day was posted by Brian Layton, Zach Todd, Marvin Manson and Kyle Mullicane whose 47 secured first place honors in the second round for Britt Development Group. Closest to the hole and longest drive competition winners for each round included in the first round: Eric Kramer, “Closest to the Hole”

Smith with “Closest to the Hole” winner Eric Kramer from the Ferguson Enterprise foursome.

The afternoon foursomes begin their rounds.

Making the rounds during the afternoon tournament.

Thanks to Helistar Aviation for their participation!

HBAMT REMODELERS COUNCIL Council President - Ricky Scott. The HBAMT Remodelers Council meets on the third Wednesday of the month, 11:00 a.m. at varying locations. Next meeting: Wednesday, September 21. Location and topic: to be announced. Price: free for RMC members with RSVP; $15 for non-members with RSVP ($20 w/o). Council RSVP Line: 615/377-9651, ext. 301

INFILL BUILDERS COUNCIL The Infill Builders meets on the third Thursday of the month, 11:30 a.m. at the HBAMT offices until further notice. Next meeting: to be announced. Council RSVP Line: 615/377-9651, ext. 311 MIDDLE TENN SALES & MARKETING COUNCIL Council President - Jody Derrick. The SMC meets on the first Thursday of the month, 9:00 a.m. at the HBAMT offices. Next meeting: Thursday, September 1, 9:00 a.m. at the HBAMT. Topic: “Digital Marketing 101,” with BDX. Times are changing and builders need to arm their buyers with information in engaging forms. There are so many new selling tools available today, however most builders aren’t sure where to start. During this session we will discuss the hottest trends and how you can implement them into your sales strategy. SMC members free thanks to BDX; non-SMC members $25 w/RSVP, $35 w/o RSVP Council RSVP Line: 615/377-9651, ext. 302.

The September, 2016 issue of The Nail, the monthly magazine of the Home Builders Association of Middle Tennessee.

The September, 2016 issue of The Nail, the monthly magazine of the Home Builders Association of Middle Tennessee.