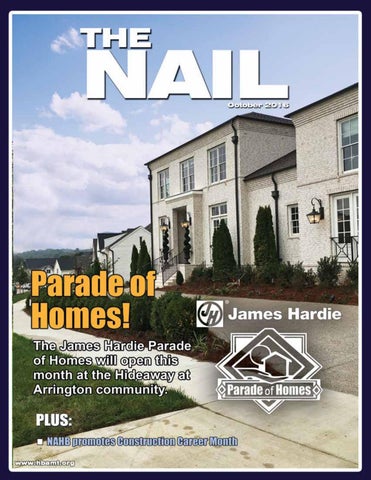 As the NAHB celebrates Careers in Construction Month in October, builders around the country are seeking skilled craftsmen to help them build the American Dream.

The 2016 James Hardie Parade of Homes opens October 8 at the Hideaway at Arrington. Get a sneak peek here with these excerpts taken from the official event plan book!

ON THE COVER: The James Hardie Building Products Parade of Homes opens October 8 at the Hideaway at Arrington. Get a sneak peek inside! More on page ten. October, 2016

ales of newly built, single-family homes fell 7.6 percent in August from an upwardly revised July reading to a seasonally adjusted annual rate of 609,000 units, according to newly released data by the U.S. Department of Housing and Urban Development and the U.S. Census Bureau. This marks the second consecutive month that sales have topped a 600,000 annual pace since the Great Recession. “Given the huge jump in sales in July, the August reading remains robust,” said Ed Brady, chairman of the National Association of Home

Sales are up 21 percent from August last year and year-todate they are running 13 percent higher. 6 The NAIL

Builders (NAHB) and a home builder and developer from Bloomington, Ill. “Sales are up 21 percent from August last year and year-to-date they are running 13 percent higher, indicating that the housing recovery remains firmly on track.” “A low supply of homes, a broadening of the market with additional sales growth in lower price points and rising household formation all point to a growing demand for housing as we move into 2017,” said NAHB Chief Economist Robert Dietz. The inventory of new homes for sale was 235,000 in August, which is a 4.6-month supply at the current sales pace. The median sales price of new houses sold was $284,000. Regionally, new home sales fell by 34.3 percent in the Northeast, 12.3 percent in the South and 2.4 percent in the Midwest. Sales rose 8 percent in the West. n

Consumer confidence looking up in September

he Consumer Confidence Index, reported by the Conference Board, rose in September. Compared with last month, consumers were more optimistic about both the current situation and the near term outlook. The Consumer Confidence Index rose to 104.1, from 101.8 in August. The present situation index rose to 128.5, from 125.3, and the expectations index increased to 87.8, from 86.1. Consumers’ assessments of current business conditions were mixed. Assessments shifted from both “good” and “bad” to “normal”. The share of respondents rating business conditions “normal” rose by 4.9 percentage points from 51.5% to 56.4%. A net decline of 2.9 percentage points in assessments of “good” combined with a 2.0 percentage point net decline in assessments of “bad” for the total.

ationwide housing starts fell 5.8 percent to a seasonally adjusted annual rate of 1.14 million units in August, according to newly released data from the U.S. Housing and Urban Development and the Commerce Department. Overall permit issuance edged 0.4 percent lower. “After two months of gains, the housing market gave back a bit in August,” said Ed Brady, chairman of the NAHB. “However, with builders reporting low inventory levels and rising confidence, we expect more consumers will return to the market in the months ahead.” “The August reading represents a onemonth blip in what has been a long-term, gradual recovery,” said NAHB Chief Economist Robert Dietz. “On a year-over-year basis, single-family starts are up 9 percent while multifamily construction continues to level off at a solid level as that sector seeks to find a balance between supply and demand.” Both housing sectors posted production declines in August. Single-family housing starts fell 6 percent to a seasonally adjusted annual rate of 722,000 units while multifamily production declined 5.4 percent to 420,000 units. Combined single- and multifamily starts increased in three of the four regions in August. The Northeast, Midwest and West posted respective gains of 7.6 percent, 5.6 percent and

1.8 percent, respectively. The South registered a 14.8 percent decline. Single-family permits rose 3.7 percent in August to a rate of 737,000 while multifamily permits dropped 7.2 percent to 402,000. Permit issuance increased 5.1 percent in the Northeast, 4.2 percent in the Midwest and 0.7 percent in the West. Meanwhile, the South posted a loss of 3.4 percent. Builder confidence surges Builder confidence in the market for newly built, single-family homes in September jumped six points to 65 from a downwardly revised August reading of 59 on the National Association of Home Builders/Wells Fargo Housing Market Index (HMI) released today. This marks the highest HMI level since October 2015. “As household incomes rise, builders in many markets across the nation are reporting they are seeing more serious buyers, a positive sign that the housing market continues to move forward,” said Brady. “The single-family market continues to make gradual gains and we expect this upward momentum will build throughout the remainder of the year and into 2017.” “With the inventory of new and existing homes remaining tight, builders are confident that if they can build more homes they can sell them,” said Dietz. “Though solid job creation

and low interest rates are also fueling demand, builders continue to be hampered by supply-side constraints that include shortages of labor and lots.” Derived from a monthly survey that NAHB has been conducting for 30 years, the NAHB/ Wells Fargo Housing Market Index gauges builder perceptions of current single-family home sales and sales expectations for the next six months as “good,” “fair” or “poor.” The survey also asks builders to rate traffic of prospective buyers as “high to very high,” “average” or “low to very low.” Scores for each component are then used to calculate a seasonally adjusted index where any number over 50 indicates that more builders view conditions as good than poor. All three HMI components moved higher in September. The component measuring current sales expectations rose six points to 71 and the gauge charting sales expectations in the next six months increased five points to also stand at 71. The index measuring traffic of prospective buyers posted a four-point gain to 48. The three-month moving averages for HMI scores posted gains in three out of the four regions. The Northeast and South each registered a one-point gain to 42 and 64, respectively, while the West rose four points to 73. The Midwest was unchanged at 55. n Editor’s Note: The NAHB/Wells Fargo Housing Market Index is strictly the product of NAHB Economics, and is not seen or influenced by any outside party prior to being released to the public. HMI tables can be found at nahb.org/hmi. More information on housing statistics is also available at housingeconomics.com.

s the NAHB celebrates Careers in Construction Month in October, builders around the country are seeking skilled craftsmen to help them build the American Dream. The overall trend for open construction jobs has been increasing since the end of the Great Recession. According to the latest Bureau of Labor Statistics data and analysis by NAHB, there were 214,000 open construction sector jobs in July, which marks the second highest monthly count of open, unfilled jobs since May 2007. “Residential construction offers a number of fulfilling career opportunities, from architects and engineers to carpenters, plumbers, electricians, painters and landscapers,” said NAHB Chairman Ed Brady. “Yet, our builders are telling us that access to skilled labor remains a top challenge.” After many workers left the home building industry during the Great Recession to pursue employment in other sectors, not nearly enough of them have returned. This labor shortage can lead to delays in completing projects on time, which can increase the cost of building homes and make housing more expensive for consumers.

“As the housing industry continues to recover, we are focused on training more workers and leaders to fill these important roles,” said Brady. NAHB’s educational partner, HBI, is a national leader for career training in the building industry. HBI offers educational programs in 41 states and the District of Columbia, reaching more than 13,000 students each year. These include more than 5,000 students in HBI’s pre-apprenticeship programs. NAHB’s Student Chapters Program is another important component to preparing the next generation of building professionals. With 140 secondary, associate and four-year college chapters throughout the country, the program offers students first-hand exposure to the building industry through NAHB membership, educational programming and networking opportunities. Educators, parents and students are encouraged to take a close look at the career opportunities available in residential construction and understand that a vocational education offers satisfying career paths and financial gains. Visit nahb.org or hbi.org to learn more. n October, 2016

8 PARADE of HOMES Opens through the 23rd

HBAMT REMODELERS COUNCIL Council President - Ricky Scott. The HBAMT Remodelers Council meets on the third Wednesday of the month, 11:00 a.m. at varying locations. Next meeting: Wednesday, October 19. Location and topic: to be announced. Price: free for RMC members with RSVP; $15 for non-members with RSVP ($20 w/o). Council RSVP Line: 615/377-9651, ext. 301

The October, 2016 issue of The Nail, the official publication of the Home Builders Association of Middle Tennessee.

The October, 2016 issue of The Nail, the official publication of the Home Builders Association of Middle Tennessee.