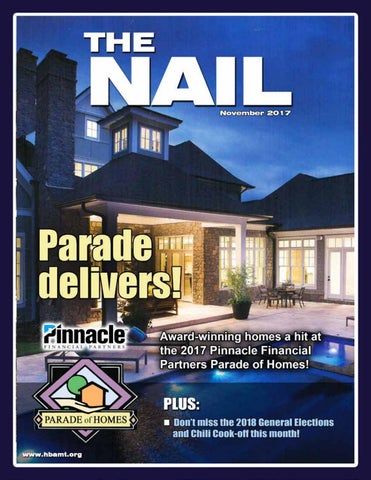 The Preview Party kicked off the Pinnacle Financial Partners Parade of Homes in style the Thursday prior to opening weekend.

ON THE COVER: Poolside at the â&#x20AC;&#x153;Best of Showâ&#x20AC;? winning Legend Homes Parade house. A complete listing of all the award winners can be found on page thirteen (13) of this issue. November, 2017

ales of newly built, single-family homes in September rose 18.9 percent to a seasonally adjusted annual rate of 667,000 units from an upwardly revised August reading, according to newly released data by the U.S. Department of Housing and Urban Development and the U.S. Census Bureau. This is the highest sales rate since October 2007. Year-to-date, new home sales are 8.6 percent above their level over the same period last year. “The September sales numbers show that there is solid, growing demand for new home

As existing home inventory remains tight, expect new homes sales to continue to make gains in the months ahead. 6 The NAIL

construction,” said Granger MacDonald, chairman of the National Association of Home Builders (NAHB) and a home builder and developer from Kerrville, Texas. “However, builders need to continue to monitor rising construction costs to keep houses affordably priced.” “New home sales have bounced back from a few soft months and have returned to the strong growth trend we saw earlier this year,” said NAHB Chief Economist Robert Dietz. “As existing home inventory remains tight, we can expect new homes sales to continue to make gains in the months ahead.” The inventory of new homes for sale was 279,000 in September, which is a 5.0-month supply at the current sales pace. New home sales increased in all four regions. Sales rose 33.3 percent in the Northeast, 25.8 percent in the South, 10.6 percent in the Midwest and 2.9 percent in the West. n

ationwide housing starts fell 4.7 percent in September to a seasonally adjusted annual rate of 1.13 million units, according to newly released data from the U.S. Department of Housing and Urban Development and the Commerce Department. Nationwide single-family production fell 4.6 percent to 829,000 units due to a 15.3 percent decline in the hurricane-ravaged South. All other regions posted gains in the single-family sector, and nationwide single-family permits increased 2.4 percent. “We are seeing the hurricanes take a toll on single-family production, but builder confidence is strong and production should bounce back as the recovery process gets underway,” said Granger MacDonald, NAHB chairman. “Looking at historical data, there is a pattern of decreased production immediately following natural disasters but economic fundamentals will drive the longer-term trend in housing starts,” said NAHB Senior Economist Michael Neal. “Nationwide single-family permits are up this month, and year-to-date single-family starts are 9.1 percent ahead of their level over the same period last year — two indicators that this sector continues to improve.” Regionally in September, combined singleand multifamily housing production rose 15.7 percent in the West. Starts fell 9.2 percent in

the Northeast, 9.3 percent in the South and 20.2 percent in the Midwest. Overall permit issuance in September was down 4.5 percent to a seasonally adjusted annual rate of 1.22 million units. Single-family permits rose 2.4 percent to 819,000 units while multifamily permits fell 16.1 percent to 396,000. Regionally, overall permits rose 9.2 percent in the Northeast and 0.5 percent in the Midwest. Permits fell 5.6 percent in the South and 9.2 percent in the West. Builder confidence up four points Builder confidence in the market for newly-built single-family homes rose four points to a level of 68 in October on the National Association of Home Builders/Wells Fargo Housing Market Index (HMI). This was the highest reading since May. “This month’s report shows that home builders are rebounding from the initial shock of the hurricanes,” said MacDonald. “However, builders need to be mindful of long-term repercussions from the storms, such as intensified material price increases and labor shortages.” “It is encouraging to see builder confidence return to the high 60s levels we saw in the spring and summer,” said Dietz. “With a tight inventory of existing homes and promising

he count of unfilled jobs in the construction sector continued to rise in August, reaching the highest level since February 2007. Given the significant need for repair and restoration work in the wake of Hurricanes Harvey and Irma, we can expect additional increases in the months ahead. According to the BLS Job Openings and Labor Turnover Survey (JOLTS) and NAHB analysis, the number of open construction sector jobs (on a seasonally adjusted basis) increased to 247,000 in August. This represents a 34% increase since August 2016. The open position rate (job openings as a percent of total employment) for August expanded to 3.5%. On a smoothed twelve-month

moving average basis, the open position rate for the construction sector increased to 2.7%. The overall trend for open construction jobs has been increasing since the end of the Great Recession. This is consistent with survey data indicating that access to labor remains a top business challenge for builders. However, after

growth in household formation, we can expect the new home market continue to strengthen at a modest rate in the months ahead.” Derived from a monthly survey that NAHB has been conducting for 30 years, the NAHB/ Wells Fargo Housing Market Index gauges builder perceptions of current single-family home sales and sales expectations for the next six months as “good,” “fair” or “poor.” The survey also asks builders to rate traffic of prospective buyers as “high to very high,” “average” or “low to very low.” Scores for each component are then used to calculate a seasonally adjusted index where any number over 50 indicates that more builders view conditions as good than poor. All three HMI components posted gains in October. The component gauging current sales conditions rose five points to 75 and the index charting sales expectations in the next six months increased five points to 78. Meanwhile, the component measuring buyer traffic ticked up a single point to 48. Looking at the three-month moving averages for regional HMI scores, the South rose two points to 68 and the Northeast rose one point to 50. Both the West and Midwest remained unchanged at 77 and 63, respectively. Editor’s Note: The NAHB/Wells Fargo Housing Market Index is strictly the product of NAHB Economics, and is not seen or influenced by any outside party prior to being released to the public. HMI tables can be found at nahb.org/hmi. More information on housing statistics is also available at housingeconomics.com. n

a spate of data at the start of the year indicate a leveling off of the count of unfilled construction jobs, open positions are again on the rise. The construction sector hiring rate, as measured on a twelve-month moving average basis, was effectively unchanged at 5.3% in August, while the monthly rate increased to 5.6%. The twelve-month moving average for layoffs was steady (2.7%), remaining in a range set in 2014. The quits rate remained at 2%. Overall, the uptick in hiring along with rise in job openings is consistent with a construction market that is supply-side constrained. Overall, the labor market for construction workers remains tight as it continues to expand. Home builders and remodelers added 80,600 jobs over the last 12 months, and industry employment has increased by more than 710,000 since the low point after the recession. As single-family housing starts continue to increase more workers will be needed in the construction sector. n November, 2017

he National Association of Home Builders’ (NAHB) Remodeling Market Index (RMI) posted a reading of 57 in the third quarter of 2017, up two points from the previous quarter. For 18 consecutive quarters, the RMI has been at or above 50, which indicates that more remodelers report market activity is higher compared to the prior quarter than report it is lower. The overall RMI averages ratings of current remodeling activity with indicators of future remodeling activity. “Remodelers are seeing higher demand in residential repairs, and expect to be busy well into the new year with jumps in work backlog, call for bids and proposal appointments, likely due in part to the significant damage caused by hurricanes across the southern states,” said NAHB Remodelers Chairman Dan Bawden, CAPS, GMB, CGR, CGP, a remodeler from Houston. “However, the ongoing labor shortage is constraining how quickly the repairs can be completed.”

Remodelers are finding it more difficult to find skilled labor; over 90 percent of respondents stated that there is a shortage of finish carpenters. This is a significant increase from the third quarter of 2013, when only 44 per-

cent of respondents reported a shortage of finish carpenters. Current market conditions increased one point from the second quarter of 2017 to 56. Among its three major components, major additions and alterations waned one point to 53, minor additions and alterations increased three points to 56, and the home maintenance and repair component rose one point to 58. The future market indicators index rose three points from the previous quarter to 58. Calls for bids increased two points to 58, amount of work rose three points to 56, the backlog of remodeling jobs gained two points to 60 and appointments for proposals increased four points to 59. “In addition to the labor shortage, the cost of materials is becoming a pressing issue for remodelers,” said NAHB Chief Economist Robert Dietz. “Both of these issues are constraining remodelers’ ability to complete projects in a timely and cost-effective manner, especially moving forward after natural disasters.” For the full RMI tables, please visit www. nahb.org/rmi. For more information about remodeling, visit www.nahb.org/remodel. n

kicks off 2017 Pinnacle Financial Partners Parade of Homes in style! The 2017 Pinnacle Financial Partners Parade of Homes Preview Party drew a big crowd at the Witherspoon community in Brentwood. Held the Thursday evening prior to the opening weekend of the show, the elegant yet fun-filled party proved to be a fitting kick-off to an amazing Parade of Homes. Attendees enjoyed tasty food, cold beverages, great music and the presentation of the â&#x20AC;&#x153;Best of Showâ&#x20AC;? awards before getting the first look at the six incredible Parade homes! A big thanks to the CPS Land team for organizing and hosting the Preview Party. n

Big wins at the Parade!

he 2017 Pinnacle Financial Partners Parade of Homes drew the largest attendance numbers for the event in ten years during a successful two-week run last month at the Witherspoon community in Brentwood. Big crowds lined up daily to see the six incredible homes and interior designs that generated strong word-of-mouth endorsements throughout the event. The stunning homes didn’t disappoint and received a bevy of well-deserved awards, beginning with the annual Preview Party event prior to opening weekend where the Legend Homes team was presented a tightly contested “Best of Show Award.” Parade attendees cast their votes during the first week of the show leading to the announcement of the People’s Choice award winners

during a live remote on 92.9 Mix Radio. Ford Custom Classic Homes took home five of the eleven awards including “Best of Show.” The much coveted “Best Interior Design Award” went to Autumnflora Miklich, Bella Vita Interiors, and the Ford Custom Classic Homes team at both the Preview Party and the presentation of the People’s Choice Awards. For a complete listing of all the winners from each of the award presentations see page 13 of this issue. A big thanks to our title sponsor Pinnacle Financial Partners for their support. Thanks also to the developers who hosted the event, CPS Land and Ford Custom Classic Homes, and to our benefiting charity, the Williamson County Animal Center. n

Best of Show Awards Presented at the Preview Party

The November 2017 issue of The Nail, the official monthly publication of the Home Builders Association of Middle Tennessee (HBAMT).

The November 2017 issue of The Nail, the official monthly publication of the Home Builders Association of Middle Tennessee (HBAMT).