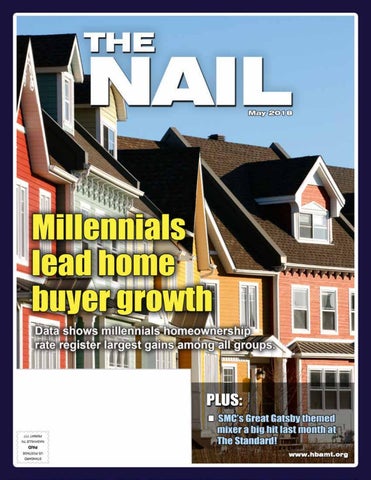 The annual HBAMT golf event is set for this August. Sign up now as a sponsor and take part in all the fun while promoting your business!

Builder confidence in solid territory, down one point in April

uilder confidence in the market for newly-built single-family homes edged down one point to a level of 69 in April on the National Association of Home Builders/ Wells Fargo Housing Market Index (HMI) but remains on firm ground. “Strong demand for housing is keeping builders optimistic about future market conditions,” said NAHB Chairman Randy Noel, a custom home builder from LaPlace, La. “However, builders are facing supply-side constraints, such as a lack of buildable lots and increasing construction material costs. Tariffs placed on Canadian lumber and other imported products are pushing up prices and hurting housing affordability.” “Ongoing employment gains, rising wages and favorable demographics should spur demand for single-family homes in the months ahead,” said NAHB Chief Economist Robert Dietz. “The minor dip in builder confidence this month is likely due to winter weather ef-

Employment gains and rising wages should spur demand for single-family homes in the months ahead. 8 The NAIL

fects, which may be slowing housing activity in some pockets of the country. As we head into the spring home buying season, we can expect the market to continue to make gains at a gradual pace.” Derived from a monthly survey that NAHB has been conducting for 30 years, the NAHB/ Wells Fargo Housing Market Index gauges builder perceptions of current single-family home sales and sales expectations for the next six months as “good,” “fair” or “poor.” The survey also asks builders to rate traffic of prospective buyers as “high to very high,” “average” or “low to very low.” Scores for each component are then used to calculate a seasonally adjusted index where any number over 50 indicates that more builders view conditions as good than poor. The HMI index gauging buyer traffic held steady at 51, the chart measuring sales expectations in the next six months fell a single point to 77, and the component gauging current sales conditions dropped two points to 75. Looking at the three-month moving averages for regional HMI scores, the South remained unchanged at 73, the Northeast fell one point to 55, the Midwest declined two points to 66, and the West dropped three points to 76. n

California tops the nation in employment of residential construction workers—more than half a million residents worked in home building in 2016. This number is still down significantly from the 2006 peak of 788,000, though. Despite being one of the states most severely affected by the housing downturn, Florida comes in second with 361,000 residential construction workers. Among the states hardest hit by the housing downturn and slowest to recover home building jobs are New Mexico, Nevada and Arizona, which still show job losses of 46, 43, and 41

percent, respectively, compared to 2006. Despite these significant job losses, home building in Nevada and Arizona continues to employ a relatively high share of local workers—more than 3 percent of the employed labor force. NAHB’s analysis indicates that the average congressional district has more than 8,800 residents working in residential construction, but that number is often significantly higher. For example, in Montana’s single congressional district, close to 20,600 residents are in home building. Colorado’s 7th district, which incorporates parts of the Denver-Aurora metro area, and Florida’s 19th district, which serves an area on the west coast from Fort Myers to Marco Island, come in second and third with more than 18,000 employed in home building. NAHB estimates of residential construction employment by state and congressional district are based on two main sources of data: the American Community Survey from the Census Bureau and the Quarterly Census of Employment and Wages compiled by the Bureau of Labor Statistics. These estimates include self-employed workers, who constitute approximately a quarter of the labor force of the sector. Read the full study on HousingEconomics.com. n

ecent data from the Census Bureau confirms that millennials are increasingly entering the housing market as first-time buyers. The homeownership rate of millennials—now at 36 percent—registered the largest gains among all age groups in 2017. As the nation’s largest demographic group, more than 70 million millennials are poised to dominate the home buying market in the months and years ahead. “Millennials are recognizing the benefits of homeownership and are eager to buy their first homes,” said NAHB Chairman Randy Noel. “And contrary to conventional wisdom, this generation is in the market for single-family homes in the suburbs as they

look ahead to raising their families.” Home builders recognize the changing demographics and the increasing demand for entry-level homes. Yet rising construction costs and limited lot availability create significant challenges to building smaller, single-family detached homes that are both affordable to first-time buyers and cost-effective for builders. With millennials willing to compromise on space, townhouses are offering a more affordable option for younger buyers ready to purchase their first homes. After experiencing a drop during the Great Recession, the share of new townhome construction has been rising since 2009. According to NAHB analysis of Census data, townhome

construction in 2017 was up seven percent from 2016. Millennials also are looking for homes with three bedrooms and two bathrooms, outdoor space, flexible areas that can be used for a variety of purposes and more luxurious finishes, like quartz countertops. Ongoing economic growth and rising wages are expected to continue boosting housing demand throughout 2018. NAHB analysis of the Census Bureau’s Housing Vacancy Survey shows that the number of home owner households increased by 1.5 million in 2017, while the number of renter households declined by 76,000. n

HBAMT REMODELERS COUNCIL Council President - Ricky Scott. The HBAMT Remodelers Council meets on the third Wednesday of the month at varying locations. Next meeting: Wednesday, May 16. Location: Ferguson. Topic: to be announced. Price: free for RMC members with RSVP pending sponsorship; $15 for non-members with RSVP ($20 w/o). Council RSVP Line: 615/377-9651, ext. 263

The May 2018 issue of The Nail, the official monthly magazine of the Home Builders Association of Middle Tennessee (HBAMT).

The May 2018 issue of The Nail, the official monthly magazine of the Home Builders Association of Middle Tennessee (HBAMT).