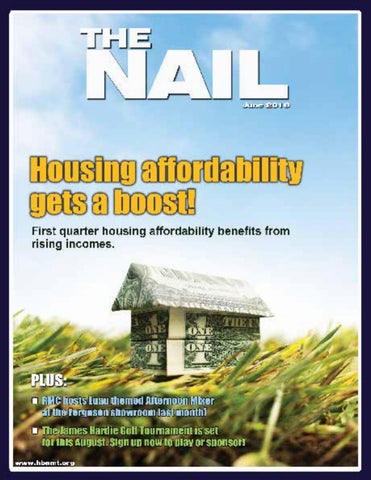 The Remodeler’s Council’s Afternoon Luau was a big hit last month at the Ferguson showroom in Nashville.

15 2018 HBAMT Golf Event, sign up to play or sponsor today! The annual HBAMT golf event is set for this August. Sign up now to participate in the big event as either a player or sponsor!

ON THE COVER: Housing affordability gets a boost from rising wages. See story page eleven. June, 2018

“Single-family starts are up 8.3 percent for the first four months of the year relative to the start of 2017, which is higher than our forecast and bodes well for the rest of the year,” said NAHB Chief Economist Robert Dietz. “However, builders must manage supply-side hurdles, such as ongoing building material price increases and shortages of land and labor, to meet growing housing demand. Lumber prices continue to rise, with recent increases adding more than $7,000 to the price of an average single-family home.” Regionally in April, combined single- and multifamily housing production increased 6.4 percent in the South. Starts fell 8.1 percent in the Northeast, 12 percent in the West and 16.3 percent in the Midwest. Overall permits — which are a sign of future housing production activity — inched down 1.8 percent in April to a seasonally adjusted annual rate of 1.35 million units after a post-recession high in March. Single-family permits ticked up 0.9 percent to 859,000 while multifamily permits fell 6.3 percent to 493,000 after a 20.4 percent jump in March. Permits rose 12 percent in the South. They fell 4.4 percent in the Midwest, 13.2 percent in the West and 31.9 percent in the Northeast. n

Builder confidence climbs to 70 in May

uilder confidence in the market for newly-built single-family homes rose two points to a level of 70 in May after a downwardly revised April reading on the National Association of Home Builders/ Wells Fargo Housing Market Index (HMI). This is the fourth time the HMI has reached 70 or higher this year. “The solid May report shows that builders are buoyed by growing consumer demand for single-family homes,” said NAHB Chairman Randy Noel. “However, the record-high cost of lumber is hurting builders’ bottom lines and making it more difficult to produce competitively priced houses for newcomers to the market.” “Tight housing inventory, employment gains and demographic tailwinds should continue to boost demand for newly-built single-family homes,” said NAHB Chief Economist Robert Dietz. “With these fundamentals in place, the housing market should

improve at a steady, gradual pace in the months ahead.” Derived from a monthly survey that NAHB has been conducting for 30 years, the NAHB/Wells Fargo Housing Market Index gauges builder perceptions of current single-family home sales and sales expectations for the next six months as “good,” “fair” or “poor.” The survey also asks builders to rate traffic of prospective buyers as “high to very high,” “average” or “low to very low.” Scores for each component are then used to calculate a seasonally adjusted index where any number over 50 indicates that more builders view conditions as good than poor. The HMI chart gauging current sales conditions increased two points to 76 in May while the indexes measuring buyer traffic and expectations in the next six months remained unchanged at 51 and 77, respectively.

Looking at the three-month moving averages for regional HMI scores, the West and Northeast held steady at 76 and 55, respectively. Meanwhile, the South and Midwest each edged down one point to respective levels of 72 and 65. n

trong wage growth more than offset an increase in mortgage interest rates to boost nationwide housing affordability in the first quarter of 2018, according to the NAHB/Wells Fargo Housing Opportunity Index (HOI) released recently. In all, 61.6% of new and existing homes sold between the beginning of January and end of March were affordable to families earning the U.S. median income of $71,900. This is up from the 59.6% in the fourth quarter of 2017. “Continued job growth, rising wages and strong consumer confidence are fueling housing demand. In turn, this should lead to more buyers entering the housing market in the coming months,” said NAHB chairman Randy Noel. “However, builders continue to face chronic labor and lot shortages, rising prices for building materials and excessive regulations.” “At the national level, median family income rose an impressive 5.7% to $71,900 in 2018 from $68,000 last year, and this wage growth helped to boost housing affordability,” said NAHB chief economist Robert Dietz. “A growing economy, along with tight inventories and increasing household formations, will

lift housing production in the year ahead. But we also expect mortgage rates to continue to rise, and this will place downward pressure on affordability.” Average mortgage rates jumped by nearly 30 basis points to 4.34% from 4.06% in the fourth quarter of 2017. Of the 237 metropolitan areas recorded in the first quarter HOI, 167 markets registered a gain in affordability from the fourth quarter of 2017, 68 posted a loss and two were unchanged. Youngstown-Warren-Boardman, OhioPa., was the nation’s most affordable major housing market. There, 90.9% of all new and existing homes sold were affordable to families earning the area’s median income of $60,100. Meanwhile, Cumberland, Md.-W. Va., was rated the nation’s most affordable smaller market, with 98.5% of homes sold in the first quarter being affordable to families earning the median income of $55,500. Rounding out the top five affordable major housing markets in respective order were Indianapolis-Carmel-Anderson, Ind.; Scranton-Wilkes Barre-Hazleton, Pa.; Toledo, Ohio; and Harrisburg-Carlisle, Pa. Smaller markets joining Cumberland at

the top of the list included Springfield, Ohio; Elmira, N.Y.; Wheeling, W.Va.-Ohio; and Fairbanks, Alaska, which also posted a fifth place tie with Binghamton, N.Y. San Francisco, for the second straight quarter, was the nation’s least affordable major market. There, just 9.2% of the homes sold in the first quarter were affordable to families earning the area’s median income of $119,600. Other major metros at the bottom of the affordability chart were also in California. In descending order, they included Los Angeles-Long Beach-Glendale, Anaheim-Santa Ana-Irvine, San Jose-Sunnyvale-Santa Clara, and San Diego-Carlsbad. All five least affordable small housing markets were also in the Golden State. At the very bottom of the affordability chart was Salinas, where 10.7% of all new and existing homes sold were affordable to families earning the area’s median income of $69,100. In descending order, other small markets at the lowest end of the scale were Santa Cruz-Watsonville, San Luis Obispo-Paso Robles-Arroyo Grande, Napa, and San Rafael. See nahb.org/hoi for tables, historic data and details. n June, 2018

Luau themed mixer at The Ferguson showroom a big hit! Aloha was the word from the RMC hosted â&#x20AC;&#x153;Luau,â&#x20AC;? an Afternoon Mixer sponsored by Ferguson Bath, Kitchen & Lighting Gallery and held at their Nashville showroom! A big thanks to Ferguson for the great food and their sponsorship of the fun-filled event! n

Please return your completed registration form (provided below) to the HBAMT to enter. ALL COMPANIES & SINGLE PLAYERS ENTERING MUST BE A MEMBER OF THE HBAMT.

HBAMT REMODELERS COUNCIL Council President - Ricky Scott. The HBAMT Remodelers Council meets on the third Wednesday of the month at varying locations. Next meeting: Wednesday, June 20. Location: to be announced. Topic: to be announced. Price: free for RMC members with RSVP pending sponsorship; $15 for non-members with RSVP ($20 w/o). Council RSVP Line: 615/377-9651, ext. 263

The June 2018 issue of The Nail, the official monthly publication of the Home Builders Association of Middle Tennessee.

The June 2018 issue of The Nail, the official monthly publication of the Home Builders Association of Middle Tennessee.