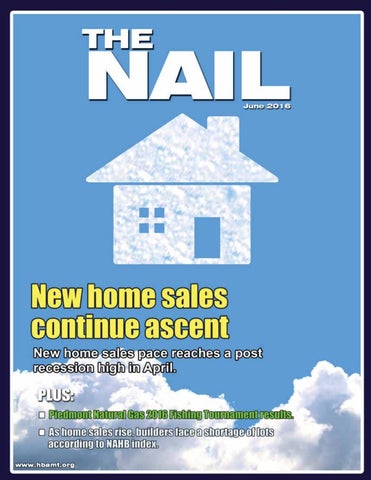 According to builders reports reflected on the recent NAHB/Wells Fargo Housing Market Index, the supply of lots are at their lowest levels since the information began being collected in 1987.

ON THE COVER: New home sales continue to rise and recently reached their highest levels since the end of the recession. More on page six. June, 2016

ales of newly built, single-family homes rose 16.6 percent in April from an upwardly revised March reading to a seasonally adjusted annual rate of 619,000 units, according to newly released data by the U.S. Department of Housing and Urban Development and the U.S. Census Bureau. This is the highest sales pace since January 2008. “Builders remain optimistic about the housing market, and this month’s jump in new home sales is a positive sign that grow-

This month’s jump in new home sales is a positive sign that growing demand will keep the housing sector on an upward trajectory through the spring buying season. 6 The NAIL

ing demand will keep the housing sector on an upward trajectory through the spring buying season,” said NAHB Chairman Ed Brady, a home builder and developer from Bloomington, Ill. “Rising home sales combined with tight inventory will translate into increased housing production as we move onward in 2016, especially as job creation continues and mortgage rates remain low,” said NAHB Chief Economist Robert Dietz. The inventory of new homes for sale was 243,000 in April, which is a 4.7-month supply at the current sales pace. The median sales price of new houses sold in April was $321,100. Regionally, new home sales rose by 52.8 percent in the Northeast, 18.8 percent in the West and 15.8 percent in the South. Sales fell by 4.8 percent in the Midwest. n

“Adding great builders like Goodall to our team is exciting,” stated Clayton home building group President, Keith Holdbrooks. “As we continue to grow and expand into the site-built market, it is important to partner with teams that share our culture of providing an excellent customer experience.” Bob Goodall, Jr. started building in 1983, following a tradition that began with his father, Bobby Goodall, Sr. The builder has focused on offering welcoming homes in beau-

purred by a modest reduction in mortgage interest rates and favorable home prices, nationwide housing affordability in the first quarter of 2016 posted a slight increase, according to the National Association of Home Builders/ Wells Fargo Housing Opportunity Index (HOI) released recently. “With interest rates near historic lows and attractive home prices, this is a great time to buy a home,” said NAHB Chairman Ed Brady. “This is the second consecutive quarter that we’ve seen a nationwide improvement in affordability due to favorable home prices and mortgage rates,” said NAHB Chief Economist Robert Dietz. “These factors, along with rising employment, a growing economy and pent-up demand will provide a boost for home sales in the second half of 2016.” In all, 65 percent of new and existing homes sold between the beginning of January and end of March were affordable to families earning the U.S. median income of $65,700. This is up from the 63.3 percent of homes sold that were affordable to median-income earners in the fourth quarter. The national median home price fell from $226,000 in the fourth quarter to $223,000 in the first quarter. Meanwhile, average mortgage rates edged lower from

4.09 percent to 4.05 percent in the same period. For the second consecutive quarter, Youngstown-Warren-Boardman, Ohio-Pa., was rated the nation’s most affordable major housing market. There, 93.1 percent of all new and existing homes sold in the first quarter were affordable to families earning the area’s median income of $53,900. Rounding out the top five affordable major housing markets in respective order were Syracuse, N.Y.; Indianapolis-Carmel-Anderson, Ind.; Scranton-Wilkes-Barre-Hazleton, Pa.; and Toledo, Ohio. Meanwhile, Cumberland, Md.-W.Va., claimed the title of most affordable small hous-

tiful neighborhoods through the development and construction of single-family homes, townhomes, courtyard cottages, condominiums and villas in the Nashville area. The range of housing has allowed Goodall to reach a wide network of buyers through its diverse offerings. The company was named 2014’s National Builder of the Year, as voted by Professional Builder Magazine. “I started building homes 33 years ago. We have been blessed with so many successful opportunities,” Goodall Homes President Bob Goodall, Jr., said. “This acquisition will help our employees, trades, suppliers and our families continue on this path of growth for years to come. Goodall Homes has developed many great leaders and this will provide many possibilities for our team members. We are honored to be on the Clayton team and to contribute to the continued success of Berkshire Hathaway.” Goodall and his management team will retain their respective positions. n

new guide co-published by the National Association of Home Builders (NAHB) and the International Code Council (ICC) provides critical answers to the most frequently asked residential construction jobsite code questions. Available through BuilderBooks, NAHB’s publishing arm, the 2015 Home Builders’ Jobsite Codes: A Quick Guide to the 2015 International Residential Code, is a portable guide for home builders, contractors, inspectors, architects, engineers and other construction professionals. The convenient field guide is a quick reference to the 2015 International Residential Code (IRC) and provides easy-to-read code requirements for every aspect of residential construction. The resource covers the impact of the 2015 code changes on things such as common walls separating townhouses, remodeling of an existing basement and more. The 2015 Home Builders’ Jobsite Code includes more than 100 detailed illustrations and useful tables and discussion on other areas of

the code, including: Foundations Fire Safety Energy Efficiency Mechanical Systems Safe & Healthy Living Environments “This new guide to the 2015 International Residential Code is an excellent resource for building professionals to stay on top of the most recent code changes,” said NAHB Chairman Ed Brady, a home builder and developer from Bloomington, Ill. “Available both in a compact pocket guide, as well as in e-book, this easy-to-use reference guide is always one of our most top selling publications, as it is an invaluable asset on the job site.” Written by Stephen A. Van Note, the guide features more than 100 illustrations, tables and figures to help the reader understand specific code requirements, as well as a glossary that provides definitions of construction-related terms.

he Piedmont Natural Gas 2016 Fishing Tournament was held May 24 on J. Percy Priest Lake at Four Corners Marina. Joe Haas Construction’s Joe Haas and Rusty Rust took home first place honors following the afternoon weigh-in. Haas and Rust reeled in 16.53 lbs worth of catches, a total that included the “Big Fish” winning catch of 4.39 lbs. The Boral Brick team of Jamie Smith and Todd Spann weighed-in with 15.93, just short of the top weight, to secure second place awards. And Jim Ford and Mike Williams took home third place honors for the Ford Construction boat. Ford and Williams reeled in 15.00 lbs worth of catches. A big thanks to title sponsor Piedmont Natural Gas and to all our sponsors; Hermitage Lighting Gallery, Mid-TN Erosion & Sediment Control, Vulcan Materials, and FBC Mortgage, whose attendance and help during the event was most appreciated. A big thanks to you all! n

AHB’s measure of lot shortages hit a new record in May. In answer to special questions on the survey for the NAHB/Wells Fargo Housing Market Index, 64 percent of builders reported that the supply of lots in their markets was low or very low— up from 62 percent last year and the highest the lot shortage percentage has been since NAHB began collecting the information in 1997. “The lack of availability of buildable lots has quickly become one of the biggest issues facing our members,” said NAHB Chairman Ed Brady, a home builder and developer from Bloomington, Ill. “While labor shortages and regulatory burdens remain struggles as well, lot shortages are preventing our builders from responding to growing demand for housing.” “We have monitored lot availability for the last two decades, and it is clear that the scarcity of building lots is growing,” said NAHB Chief Economist Robert Dietz. “Whether due to land use policy, geographic constraints

or other regulatory constraints, the lack of lots for residential construction will have negative impacts on housing affordability in many markets.” Perhaps most notable is that builders reported this record shortage at a time when new homes are being started at a rate of fewer than 1.2 million a year. In 2005, when total housing starts were over 2.0 million, the share of builders reporting a shortage of lots was “only” 53 percent. The percentage varies, based on region of the country, size of builder, and type of lot. Although the categories are seldom defined precisely, builders often think in terms of A, B and C lots, based on the desirability of their location. As you might expect, the shortage tends to be most acute for A lots. In the May 2016 survey, 69 percent of the builders said A lots were in short supply, compared to 60 percent for B lots, and 47 percent for C lots. Often, differences show up most clearly in the share of builders who report the supply of lots in their markets is “very low.” For example, the June, 2016

HBAMT REMODELERS COUNCIL Council President - Ricky Scott. The HBAMT Remodelers Council meets on the third Wednesday of the month, 11:00 a.m. at varying locations. Next meeting: Wednesday, June 15. Location and topic: to be announced. Price: free for RMC members with RSVP; $15 for non-members with RSVP ($20 w/o). Council RSVP Line: 615/377-9651, ext. 301

The June, 2016 issue of The Nail, the official monthly publication of the Home Builders Association of Middle Tennessee (HBAMT).

The June, 2016 issue of The Nail, the official monthly publication of the Home Builders Association of Middle Tennessee (HBAMT).