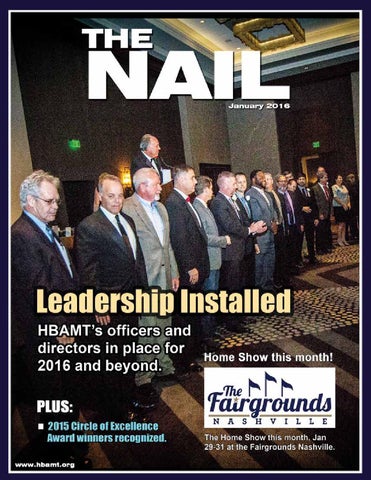 The annual Home Show will return to the Fairground Nashville this MONTH beginning Friday, January 19th.

The annual HBAMT Installation and Awards Banquet was held December 17 at The Omni in Nashville. 2016 President Randall Smith was installed during the ceremonies along with his officers and directors.

The Middle Tennessee Sales and Marketing Council presented their annual awards to the industryâ&#x20AC;&#x2122;s top sales and marketing professionals during the awards banquet at The Omni.

ON THE COVER: The International Buildersâ&#x20AC;&#x2122; Show returns this month in Las Vegas. More details on page twelve. January, 2016

2016 Builders’ Show: a universe to be discovered

he NAHB International Builders’ Show® (IBS) is the largest annual light construction show in the world, every year attracting 50,000 visitors from more than 100 countries. Discover the building universe: exhibits IBS brings together the industry’s most important global manufacturers and suppliers and showcases the latest products, materials and technologies involved in all types of buildings – including wood, concrete, stone and brick. See more than 500,000 net square feet of exhibits and 1,300 manufacturers and suppliers of the latest and most in-demand products and services. Don’t miss visiting The New American Home NAHB’s show home – which highlights new products and techniques. See cutting-edge efficiency, technology and sustainability, all set in a contemporary style home with stunning desert view. And now you can see more of what the building universe has to offer in one trip through Design & Construction Week® (DCW). DCW features the co-location of the IBS and the National Kitchen & Bath Association’s Kitchen & Bath Industry Show (KBIS). Registered IBS attendees have access to the exhibit floors of all DCW shows. A universe of knowledge: education In addition to the must-see products and exhibits,

IBS also offers the most up-to-date and innovative education the industry has to offer. The 2016 show features 120+ sessions in 8 tracks, taught by renowned building industry experts from across the country. With topics ranging from sales and marketing to construction and codes, there is literally something for everyone. You can also go in-depth with pre-show courses that can count toward an industry designation, or hands-on with demos and education on the show floor. You won’t find a more impressive collection of knowledge and new ideas for improving your business anywhere else. Universal experiences shared: networking From The House Party to the Spike Concert, you’ll have a blast at exclusive IBS events inside and out of the convention center. The Centrals are the place to get new ideas and information about your specific niche. Open to all IBS registrants, the Centrals are the hubs for lively programs, demonstrations and hands-on workshops. In addition to meeting and networking with others in an enjoyable, relaxed setting, the Centrals feature some of the industry’s top professionals who are passionate about their area of expertise – so the discussions are always enthusiastic, entertaining and fun. Register today! n

ales of newly built, single-family homes rose 4.3 percent to a seasonally adjusted annual rate of 490,000 units in November, according to newly released data from HUD and the U.S. Census Bureau. “It is encouraging to see new-home sales continue to tick upward,” said Tom Woods, chairman of the National Association of Home Builders (NAHB) and a home builder from Blue Springs, Mo. “Builders are also increasing their inventory even as they face difficulties accessing lots and labor.” “Limited gains in new-home sales can be attributed to a weak existing sales report,” said NAHB Chief Economist David Crowe. “People who already own a house comprise most of the new residential construction market, and they often must sell their existing home before making another purchase.” Regionally, sales rose 20.5 percent in the West and 4.5 percent in the South. Sales fell 28.6 percent in the Northeast and 8.6 percent in the Midwest. The inventory of new homes for sale was 232,000 units in November. This is a 5.7-month supply at the current sales pace.

Housing starts hit seven year high Nationwide housing starts rose 10.5 percent to a seasonally adjusted annual rate of 1.173 million units in November, according to newly released data from the U.S. Department of Housing and Urban Development and the Commerce Department. Single-family production increased 7.6 percent to a seasonally adjusted annual rate of 768,000 units, its highest reading since January 2008. Multifamily production rose 16.4 percent to 405,000 units. “The November gains in both singleand multifamily starts show that the overall market continues to move forward,” said NAHB Chairman Tom Woods. “As builders anticipate more consumer demand for housing, they should continue to add inventory.” “Single-family production this month has reached levels last seen before the Great Recession, an indicator that we are making gradual headway back to a normal housing market,” said NAHB Chief Economist David Crowe. “As we close out the year, we can see that the housing sector has made headway in 2015, and we expect the recovery to continue at a modest pace.” Combined single- and multifamily starts rose in the South and West, with respective

uilder confidence in the market for newly constructed single-family homes remained relatively flat in December, dropping one point to 61 on the National Association of Home Builders/ Wells Fargo Housing Market Index (HMI). “Overall, builders are optimistic about the housing market, although they are reporting concerns with the high price of lots and labor,” said NAHB Chairman Tom Woods. “For the past seven months, builder confidence levels have averaged in the low 60s, which is in line with a gradual, consistent recovery,” said NAHB Chief Economist David Crowe. “With job creation, economic growth and growing household

formations, we anticipate the housing market to continue to pick up traction as we head into 2016.” Derived from a monthly survey that NAHB has been conducting for 30 years, the NAHB/Wells Fargo Housing Market Index gauges builder perceptions of current single-family home sales and sales expectations for the next six months as “good,” “fair” or “poor.” The survey also asks builders to rate traffic of prospective buyers as “high to very high,” “average” or “low to very low.” Scores for each component are then used to calculate a seasonally adjusted index where any number over 50 indicates that more builders view condi-

gains of 21.3 and 6.3 percent. The Midwest was unchanged and the Northeast fell 8.5 percent. Overall permit issuance rose 11 percent to 1.289 million units in November. Multifamily permits rose 26.9 percent to a rate of 566,000 while single-family permits increased 1.1 percent to 723,000, the highest level since December 2007. Regionally, the Midwest, South and West posted respective permit gains of 22 percent, 5.6 percent and 21.7 percent. Permit levels in the Northeast held steady. n

tions as good than poor. All three HMI components posted modest losses in December. The index measuring sales expectations in the next six months fell two points to 67, the component gauging current sales conditions decreased one point to 66, and the index charting buyer traffic dropped two points to 46. Looking at the three-month moving averages for regional HMI scores, the West increased three points to 76 while the Northeast rose a single point to 50. Meanwhile the Midwest dropped two points to 58 and the South fell one point to 64. Editor’s Note: The NAHB/Wells Fargo Housing Market Index is strictly the product of NAHB Economics, and is not seen or influenced by any outside party prior to being released to the public. HMI tables can be found at nahb.org/hmi. More information on housing statistics is also available at housingeconomics.com. n

he HBAMT’s 72nd Annual Installation Banquet and Awards Ceremony was held December 17 at The Omni in Nashville, Tennessee. Association members celebrated the outstanding accomplishments of the past year and welcomed the officers and directors who will be leading the HBAMT for the next twelve months and beyond. Local singer and entertainer Julie Keech-Harris hosted the event and helped acknowledge and award the members for their exceptional service and dedication in 2015. Recipients included the year’s top sales and marketing performers who were recognized with the presentation of the Middle Tennessee Sales and Marketing Council’s Circle of Excellence Awards (more on page 15 and sixteen). Randall Smith was installed as the association’s 2016 president during an entertaining

ceremony conducted by his brother Dudley Smith. A thoughtful but playful slideshow documented Randall’s road to success as Dudley introduced his brother to administer the president’s oath. Prior to the Smith’s installation, outgoing President Trey Lewis gave his closing remarks, addressing the achievements and accomplishments made during the past year. The 2016 president then installed the officers, directors, and chapter and council presidents who will serve with him during the upcoming year. Senior Officers for the upcoming year are Vice President John Zelenak and Secretary/Treasurer Keith Porterfield. Local Directors in 2016 will be Randy Arnold, Jason Broderick, Andy Ferguson, Scott Ghertner, Doug Herman, Justin Hicks, Paul Huff, Brandon Jenkins, Paul Krebs, Don

and Trey Lewis, Holiday Open House Showcase Chairman. Outstanding achievements and performances in 2015 were recognized during the awards ceremony. Randy Arnold won the Reese Smith Builder of the Year Award. Ricky Scott was presented the Remodeler of the Year. Marty Maitland was the recipient the 2015 Associate of the Year. Trey Lewis presented the 2015 President’s Award to two highly deserving HBAMT builders and leaders, Jimmy Franks and David McGowan. James Carbine was

presented the Member to Member Builder Award. The award is presented to the builder member who does the most business with fellow HBAMT members during the year. The Spike of the Year Award went to Jimmy Franks. And Jennifer Earnest, winner of the Associate of the Year Award a record number of IIII times, was presented an award honoring the unsurpassed dedication and service she’s given the association during her distinguished career. Thank you all for your continued support (full list on page seventeen).

Left: Randy Arnold is presented the 2015 Builder of the Year Award from Trey Lewis.

Joni Wilson is presented the 2015 Sales Person of the Year Award by Randall Smith.

he top new home sales professionals of 2015 were recognized at the Installation and Awards Banquet as the Middle Tennessee Sales and Marketing Council (MTSMC) presented their annual Circle of Excellence Awards. Julie Keech-Harris announced winning sales agents in the Bronze, Silver and Gold categories, while Trey Lewis and Randall Smith took the stage to present the Platinum and newly created Diamond Awards (the highest designation a sales agent can attain) and the individual award winners. Award recipients, including the awards for the “highest dollar volume sold” and the “most units sold” awards, are listed below.

METRO/NASHVILLE CHAPTER Chapter President - John Whitaker: 615/843-3300. The Metro/Nashville Chapter meets on the fourth Monday of the month, 11:30 a.m. at the HBAMT offices. Next meeting: to be announced. Builders Free pending sponsorship Price: $10 per person with RSVP ($20 w/o RSVP). Chapter RSVP Line: 615/377-9651, ext. 304 ROBERTSON COUNTY CHAPTER Next meeting: to be announced.

The January, 2016 issue of The Nail, the official monthly publication of the Home Builders Association of Middle Tennessee (HBAMT).

The January, 2016 issue of The Nail, the official monthly publication of the Home Builders Association of Middle Tennessee (HBAMT).