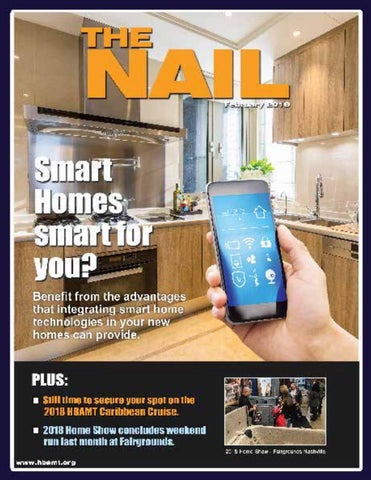 There are clear advantages builders and sales agents should know when it comes to marketing smart homes.

The Annual Home Show was held last month at the Fairgrounds Nashville during a snowy threeday weekend.

ON THE COVER: Smart homes can give builders advantages over their competitors. More details on page eleven. February, 2018

ales of newly built, single-family homes fell 9.3 percent in December to a seasonally adjusted annual rate of 625,000 units, according to newly released data by the U.S. Department of Housing and Urban Development and the U.S. Census Bureau. Despite this monthly decline, new home sales rose 8.3 percent overall in 2017 to 608,000 units. “The number of consumers planning to buy a new home in the near future is trending upward,” said NAHB Chairman Randy Noel, a custom home builder from LaPlace,

With ongoing job creation and rising home equity, we should see housing demand continue to grow in the months ahead. 8 The NAIL

La. “Inventory remains low, but its growth in 2017 is an encouraging sign. Our members are also telling us that market conditions continue to improve.” “Some moderation in sales was expected this month after a strong November reading,” said NAHB Senior Economist Michael Neal. “With ongoing job creation and rising home equity, we should see housing demand continue to grow in the months ahead.” The inventory of new home sales for sale was 295,000 in December, which is a 5.7-month supply at the current sales pace. The median sales price of new houses sold was $335,400. Regionally, new home sales decreased 2.4 percent in the Northeast, 9.5 percent in the West, 9.8 percent in the South and 10 percent in the Midwest. n

ationwide housing starts fell 8.2 percent in December to a seasonally adjusted annual rate of 1.19 million units after an upwardly revised November reading, according to newly released data from the U.S. Department of Housing and Urban Development and the Commerce Department. The December numbers show a return to trend after an especially strong November report, but overall 2017 saw significant gains in housing production. Starts rose 2.4 percent last year, pushed up by an 8.5 percent jump in the single-family sector. Multifamily starts dropped 9.8 percent. Looking at the December 2017 report, single-family starts fell 11.8 percent to a seasonally adjusted annual rate of 836,000 units. However, the three-month moving average for single-family production reached a post-recession high. Meanwhile, multifamily starts ticked up 1.4 percent to 356,000 units. “There is a pro-business sentiment in Washington right now, and our builders hope to continue receiving relief from overly burdensome regulations,” said NAHB Chairman Randy Noel. “This political climate is boosting their optimism in the housing market.” “A return to normal levels of housing production this month is expected after a very strong fall season,” said NAHB Chief Economist Robert Dietz. “We saw a surge of housing activity in the South after hurricane-related delays, and now that region is returning to its positive growth trend.” NAHB is forecasting continued growth in housing production this year, led by ongoing

single-family gains. Total housing starts are expected to grow 2.7 percent to 1.25 million units. Single-family production should increase 5 percent to 893,000 units while the multifamily sector is expected to edge 1.6 percent lower this year to 354,000. Regionally in December, combined singleand multifamily housing production fell 0.9 percent in the West, 2.2 percent in the Midwest, 4.3 percent in the Northeast and 14.2 percent in the South. Overall permit issuance in December was essentially flat, inching down 0.1 percent to a seasonally adjusted annual rate of 1.302 million units. Single-family permits rose 1.8 percent to 881,000 units while multifamily permits fell 3.9 percent to 421,000. Permits rose 43 percent in the Northeast, 8.7 percent in the Midwest and 1.7 percent in the West. Permits declined 11.1 percent in the South, led by a drop on the multifamily front. Builder confidence strong in new year Builder confidence in the market for newly-built single-family homes dropped two points to a level of 72 in January on the NAHB/Wells Fargo Housing Market Index (HMI) after reaching an 18-year high in December 2017. “Builders are confident that changes to the tax code will promote the small business sector and boost broader economic growth,” said Noel. “Our members are excited about the year ahead, even as they continue to face building material price increases and shortages of labor and lots.”

The combined events drew more than 85,000 attendees. Of that total, about 60,000 were IBS registrants. “Each and every year, a tremendous amount of work goes into making IBS an extremely valuable, can’t-miss event for anyone in residential construction,” said Geoff Cassidy, NAHB senior vice president of exhibitions and meetings. “And once again, the show was an incredible success with a palpable enthusiasm reflective of the momentum in the home building industry.”

“The HMI gauge of future sales expectations has remained in the 70s, a sign that housing demand should continue to grow in 2018,” said Dietz. “As the overall economy strengthens, owner-occupied household formation increases and the supply of existing home inventory tightens, we can expect the single-family housing market to make further gains this year.” Derived from a monthly survey that NAHB has been conducting for 30 years, the NAHB/ Wells Fargo Housing Market Index gauges builder perceptions of current single-family home sales and sales expectations for the next six months as “good,” “fair” or “poor.” The survey also asks builders to rate traffic of prospective buyers as “high to very high,” “average” or “low to very low.” Scores for each component are then used to calculate a seasonally adjusted index where any number over 50 indicates that more builders view conditions as good than poor. The three HMI components registered relatively minor losses in January. The index gauging current sales conditions dropped one point to 79, the component charting sales expectations in the next six months fell a single point to 78, and the index measuring buyer traffic fell four points to 54. Looking at the three-month moving averages for regional HMI scores, the West rose two points to 81, the South increased one point to 73, the Midwest inched up a single point to 70 and Northeast climbed five points to 59. Editor’s Note: The NAHB/Wells Fargo Housing Market Index is strictly the product of NAHB Economics, and is not seen or influenced by any outside party prior to being released to the public. HMI tables can be found at nahb.org/hmi. More information on housing statistics is also available at housingeconomics.com. n

Exhibit space for IBS also expanded from last year’s 569,000 square feet to this year’s 583,000 square feet, where more than 1,500 exhibitors displayed the latest in building products and technology. Many of the exhibitors noted the increased foot traffic this year. “The show is back and we were extremely busy all week,” said Vicki Frye, director of corporate marketing for Ply Gem, a leading manufacturer of vinyl, steel and composite siding. “People are eager to know what’s new, so we had a lot of fun showing them a wide variety of real products for real projects.” Next year, IBS and Design & Construction Week will be held in Las Vegas Feb. 19-21, 2019. n

he National Association of Home Builders’ (NAHB) Remodeling Market Index (RMI) posted a reading of 60 in the fourth quarter of 2017, up three points from the previous quarter and only the second time since 2001 the reading has reached 60. For 19 consecutive quarters, the RMI has been at or above 50, which indicates that more remodelers report market activity is higher compared to the prior quarter than report it is lower.

Current market conditions increased four points from the third quarter of 2017 to 60. Among its three major components, major additions and alterations jumped seven points to 60, minor additions and alterations increased three points to 59, and the home maintenance and repair component rose three points to 61. The future market indicators index rose one point from the previous quarter to 59. Calls for bids decreased two points to 56, amount of work committed for the next three months rose two points to 58, the backlog of remodeling jobs gained a significant six points to 66 and appointments for proposals fell two points to 57. “At a high of 60, the RMI is consistent with the strong growth in home improvement spending in 2017,” said NAHB Chief Economist Robert Dietz. “However, the surge in the backlog of remodeling jobs likely reflects supply-side challenges remodelers are facing in the form of skilled labor shortages and rising material prices.” For the full RMI tables, please visit www. nahb.org/rmi. For more information about remodeling, visit www.nahb.org/remodel. n

How smart can the “smart home” be?

hen it comes to smart homes and the growing number of apps and products to support them, many traditional builders remain apprehensive about the market. But tech-savvy design and marketing experts say it’s not good to sit on the sidelines until the dust settles. Builders should at least dip their toes in the smart-home water, even if they start small. Fresh from seeing the latest innovations at the Consumer Electronics Show, Tim Costello and Melissa Morman of Builder HomeSite and Builders Design Experience (BDX), shared what they found and what it means for home builders and remodelers during an education session at the 2018 International Builders’ Show. “The tipping point is when there is more risk to not doing something than to doing something and doing it wrong,” said Costello. At this point, “inaction is a greater risk than action.” Consolidation. While a growing number of manufacturers continue to churn out new “smart” ways to operate their products — from curtains and window shades to door locks, kitchen appliances and HVAC systems — there

also is a movement to consolidate the universe of platforms on which they run: Apple, Google Home, and Amazon’s Alexa. Builders should see systems continue to work toward a more seamless connection and make it easier to recommend suites of products for their clients. Virtual Reality. It’s a given that most buyers have great difficulty visualizing what a home will look like based on a floor plan or set of blueprints. Virtual realty home modeling means these buyers can put on a pair of goggles and see for themselves in an assortment of elevations and furnishing styles, and giant high-resolution monitors the size of an entire wall will immerse the consumers in a full-size rendering of what their future kitchen could look like.

Drones and Robots. Costello expects robots to play a larger role in home construction in the next 18 months, especially as more builders become aware of the advantages of modular and systems-built construction. And drones, now commonly used to take marketing videos for many developers, can be increasingly used to chart the topography on a site for sale, helping builders make better land acquisition decisions. No matter what the technology, builders need to understand their clear advantage when it comes to marketing smart homes. “Fundamentally, builders compete with used homes,” Costello said. When you introduce smart home technology into an existing home, problems are bound to crop up. “You can’t get a WiFi signal in every room, you have to retrofit the wiring,” making the idea of creating an “internet of things” or connected home appliances and systems just an overgrown DIY project for the consumer. “We don’t need 12 Alexas dripping their cords all over the interior design,” he said. “We need to make [home technology] impossible for home owners to replicate themselves in a used home.” n February, 2018

2018 Home Show at the Fairgrounds

Home Show Chairman Marty Maitland talked with Meryll Rose during a segment on Channel 5â&#x20AC;&#x2122;s Talk of the Town to promote the weekend event.

The February 2018 issue of The Nail, the official monthly magazine of the Home Builders Association of Middle Tennessee (HBAMT).

The February 2018 issue of The Nail, the official monthly magazine of the Home Builders Association of Middle Tennessee (HBAMT).