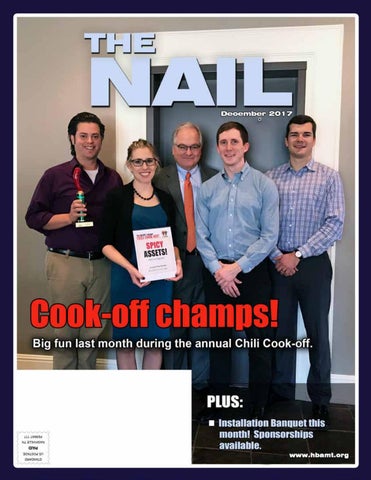 The D.R. Horton Installation & Awards Banquet will be held December 14 at The Westin Hotel. RSVP early or sign up now to sponsor!

The HBAMT’s Annual Chili Cook-off was in held in conjunction with the 2018 General Elections last month.

uilder confidence in the market for newly-built single-family homes rose two points to a level of 70 in November on the National Association of Home Builders/Wells Fargo Housing Market Index (HMI). This was the highest report since March. Despite the increase, builders continue to face supply-side constraints, such as lot and labor shortages and ongoing building material price increases. Nonetheless, demand for single-family housing is increasing at a consistent pace, driven by job and economic growth, rising homeownership rates and limited housing inventory. With these economic fundamentals in place, we should see continued upward movement of the single-family housing market as we close out 2017.

Demand for single-family housing is increasing, driven by job and economic growth and rising homeownership rates. 8 The NAIL

Derived from a monthly survey that NAHB has been conducting for 30 years, the NAHB/ Wells Fargo Housing Market Index gauges builder perceptions of current single-family home sales and sales expectations for the next six months as “good,” “fair” or “poor.” The survey also asks builders to rate traffic of prospective buyers as “high to very high,” “average” or “low to very low.” Scores for each component are then used to calculate a seasonally adjusted index where any number over 50 indicates that more builders view conditions as good than poor. Two out of the three HMI components registered gains in November. The component gauging current sales conditions rose two points to 77 and the index measuring buyer traffic increased two points to 50. Meanwhile, the index charting sales expectations in the next six months dropped a single point to 77. Looking at the three-month moving averages for regional HMI scores, the Northeast jumped five points to 54 and the South rose one point to 69. Both the West and Midwest remained unchanged at 77 and 63, respectively. n

arkets in 197 of the 337 metro areas nationwide returned to or exceeded their last normal levels of economic and housing activity in the third quarter of 2017, according to the National Association of Home Builders/First American Leading Markets Index (LMI) released today. This represents a year-over-year net gain of 40 markets. The index’s nationwide score inched up to 1.03, meaning that based on current permit, price and employment data, the nationwide average is running at 103% of normal economic and housing activity. Meanwhile, 84% of markets have shown an improvement year over year. However, individual components of the LMI are at different stages of recovery. While employment has reached 99 percent of normal activity and home price levels are well above normal at 155 percent, single-family permits are running at just 56 percent of normal activity. In encouraging news, employment levels are at or above normal levels in 118 markets — a 10 percent increase over last quarter. At the same time, permits are also expanding, as the number of markets at or above normal levels grew to 70 — a 6 percent increase over the last quarter. The LMI data show that permits have recovered from losses earlier in the year, but

remain the sluggish component of the index. “This report indicates that housing is growing at a gradual pace in markets nationwide, even as many parts of the country continue to recover from the recent hurricanes,” said NAHB Chairman Granger MacDonald. “Continued job growth and increasing household formation should help the housing market make additional gains as we begin to close out 2017.” “Home price appreciation remains the strongest component of the HMI, and strong employment numbers also bode well for the continued growth of the housing sector,” said NAHB Chief Economist Robert Dietz. “While permits continue to inch upward, they remain the weakest element of the index and show that builders need to manage supply-side hurdles, such as rising material prices and labor shortages.” “The number of metro areas on this quarter’s LMI at or above 90 percent has hit 271 — over 80 percent of all markets,” said Kurt Pfotenhauer, vice chairman of First American Title Insurance Company, which co-sponsors the LMI report. “This indicates that the overall housing market continues to move toward a full recovery.” Baton Rouge, La., continues to top the list of major metros on the LMI, with a score of 1.74 — or 74 percent better than its historical normal

market level. Other major metros leading the group include Oxnard, Calif.; Austin, Texas; Honolulu; and Provo, Utah. Rounding out the top 10 are San Jose, Calif.; Nashville, Tenn.; Spokane, Wash; Los Angeles; and Salt Lake City. Among smaller metros, Odessa, Texas, has an LMI score of 2.25, meaning that it is now at more than double its market strength prior to the recession. Also at the top of that list are Midland, Texas; Walla, Walla, Wash.; Florence, Ala.; and Kingston, N.Y. The LMI examines metro areas to identify those that are now approaching and exceeding their previous normal levels of economic and housing activity. Approximately 340 metro areas are scored by taking their average permit, price and employment levels for the past 12 months and dividing each by their annual average over the last period of normal growth. For permits and employment, both the 12-month average and the annual average during the last period of normal growth are also adjusted for the underlying population count. For single-family permits and home prices, 2000-2003 is used as the last normal period, and for employment, 2007 is the base comparison. The three components are then averaged to provide an overall score for each market; a national score is calculated based on national measures of the three metrics. An index value above one indicates that a market has advanced beyond its previous normal level of economic activity. n

Equip homes for the future with these IBS pre-show classes

ost Americans would prefer to remain in their homes as they age. But to do so, they need features that add safety and comfort as well as appealing design. Meet this growing demand as a home builder or remodeler when you take NAHB’s Certified Aging-in-Place Specialist (CAPS) pre-show courses Jan. 6-8 at the 2018 NAHB International Builders’ Show® in Orlando. Take an individual class for a specific skill, or take all three classes and earn all classroom requirements toward the prestigious CAPS designation. Registrants will also receive free entry into the IBS expo.

CAPS I: Marketing and Communicating with the Aging-in-Place Client – Learn assessment and communication techniques to effectively market

Learn more about the NAHB CAPS designation and get answers to your education questions by emailing designations@nahb.org. n December, 2017

ccording to the NAHB/First American Leading Markets Index (LMI), 84 percent, 282 metropolitan statistical areas, recorded growth in their LMI Score over the third quarter of 2017. The index uses single-family housing permits, employment, and home prices to measure proximity to a normal economic and housing market. The index is calculated for 337 local markets, metropolitan statistical areas (MSAs), as well as the entire country. A value of 1.0 means the three components have achieved a level of recovery that combined averages 1.0. Of the 337 metro areas tracked by the LMI, 197 of them have an LMI Score that exceeds 1.0. In addition, 4 out of 5 metro areas have a LMI Score that exceeds .90. The number of metro areas where overall market activity has normalized was six more than the number in the second quarter of 2017, 191. Compared to a year ago, the number is up by 40 metro areas. House prices continue to be a key driver of

of metro areas normalizing over the quarter, climbing by four to 70. The number of areas where house prices normalized climbed by one to 332. However, house prices have normalized across 98.5 percent of the metro areas. Over the past year, the expansion in the labor market recovery across the localities also led the other two categories, as an additional 47 metro areas normalized during this time period. The number of metro areas where house prices normalized increased by 5. However, despite the increase over the quarter, the number of areas where permits normalized was flat for the year. The LMI Score for the country as a whole reached 1.03. However, at 1.55, only the house price component is above 1.0. Meanwhile, the employment component sits at 0.99 and single-family permits are currently at 0.56. One interpretation of these metrics is that the slower recovery in housing supply coupled with strong demand is contributing to house price appreciation. At the same time, analysis of individual markets reveals that in areas where the overall economic fundamentals are strongest, permits have normalized, but in areas where the overall recovery is not as strong, the recovery of single-family permits represents a key challenge. n

ot night at the HBAMT! The Annual Chili Cook-off was held in conjunction with the 2018 general elections last month at the HBAMT offices. Cook-off participants and local director candidates campaigned for votes prior to the election and the presentation of the awards for the best pot of chili served during the evening. The “Accrual Hot World” team from Bellenfant CPA Firm took home first place honors during the judges’ awards for their Spicy Assets chili. And Roofing Supply Group’s “RSG’s Heavenly Hogs” took home the “People’s Choice” award for their Holy Smoke Chili. PPG Paints “Chili Dawgs” team took home the judges’ second place award for their Beans of Mayhem chili. And the Roofing Supply Group team took home third place honors during the judges’ awards. A big thanks to all the participants for making the event such a success and for serving up some amazing chili (and soup) dishes. All officers and directors who will serve in the upcoming year will be installed at the HBAMT’s Installation and Awards Banquet Thursday, December 14 at The Westin Hotel in Nashville, Tenn. Look for all your 2018 leaders and 2017 award winners in the January issue of The Nail next month. n

A professional judge tastes the PPG dish before making his final decision.

Jim Goza and Zak Kittle from the First Community Mortgage “Fire in the Hole!” team and their dish of Mama Kittle’s Famous Chili.

Mitzi Spann from the Building Solutions by Spann “The Spann Spuds” team and their dish of Mimi’s Cheesy Potato Soup.

The December 2017 issue of The Nail, the official monthly publication of the Home Builders Association of Middle Tennessee (HBAMT).

The December 2017 issue of The Nail, the official monthly publication of the Home Builders Association of Middle Tennessee (HBAMT).