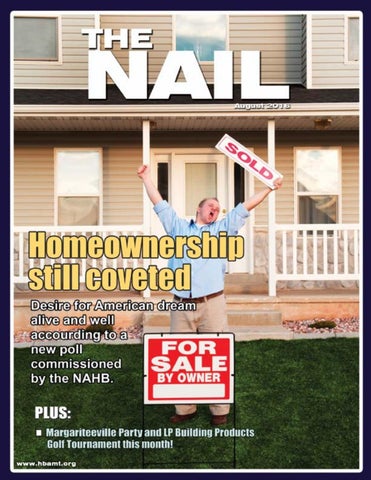 FEATURES 9 Homeownership still a priority for most Americans

A recent poll commissioned by the NAHB shows a majority of Americans still place a high value on homeownership.

Sign up now to participate at a player or a sponsor at this yearâ&#x20AC;&#x2122;s LP Building Products Golf Tournament, Thursday, August 11 at The Legends Golf Club. And donâ&#x20AC;&#x2122;t miss the Margariteeville kick-off party the night before, August 10 (see page eight)!

ON THE COVER: Americans still covet homeownership according to a survey commissioned by the National Association of Home Builders (NAHB). More on page nine. August, 2016

ales of newly built, single-family homes rose 3.5 percent in June from an upwardly revised May reading to a seasonally adjusted annual rate of 592,000 units, according to newly released data by the U.S. Department of Housing and Urban Development and the U.S. Census Bureau. New home sales are up 9.3 percent in the second quarter of 2016 from the first quarter. “This positive report is in line with our forecast for a gradual recovery of the housing market,” said NAHB Chairman Ed Brady, a home

The market should continue to firm, propelled by low mortgage interest rates and solid growth in employment. 6 The NAIL

builder and developer from Bloomington, Ill. “For builders to meet the increasing demand for housing, we need to address supply-side headwinds such as shortages of lots and labor.” “The fact that new home sales reached their highest pace in over eight years shows the housing market is gaining momentum,” said NAHB Chief Economist Robert Dietz. “The market should continue to firm throughout the year, propelled by low mortgage interest rates and solid growth in employment.” The inventory of new homes for sale was 244,000 in June, which is a 4.9-month supply at the current sales pace. The median sales price of new houses sold was $306,700. Regionally, new home sales rose by 10.9 percent in the West and 10.4 percent in the Midwest. Sales fell by 0.3 percent in the South and 5.6 percent in the Northeast. n

he National Association of Home Builders’ (NAHB) Remodeling Market Index (RMI) posted a reading of 53 in the second quarter of 2016. Although it slipped one point from the previous quarter, it is still the 13th consecutive quarter with a reading above 50. An RMI above 50 indicates that more remodelers report market activity is higher (compared to the prior quarter) than report it is lower. The overall RMI averages ratings of current remodeling activity with indicators of future remodeling activity. “Overall, remodelers are reporting steady work in the second quarter,” said 2016 NAHB Remodelers Chair Tim Shigley, CAPS, CGP, GMB, GMR, a remodeler from Wichita, Kan. “With an increase in calls for bids, we should

see the market pick up slightly moving forward.” The RMI’s current market conditions index came in at 54, decreasing by a single point from the previous quarter. Among its components, major additions and alterations dipped three points to 52, minor additions and alterations fell one point to 53 and maintenance and repair remained unchanged at 56. At 53, the RMI’s future market conditions index remained unchanged from the previous quarter. Among its four components, calls for bids increased two points to 53, the amount of work committed rose one point to 53 and appointments for proposals stayed even at 52. Meanwhile, the backlog of remodeling jobs decreased five points to 53. “At slightly above 50, the overall RMI is in line with our forecast of steady growth in

ationwide housing starts rose 4.8 percent in June to a seasonally adjusted annual rate of 1.19 million units, according to newly released data from the U.S. Department of Housing and Urban Development and the Commerce Department. Overall permit issuance increased 1.5 percent to a seasonally adjusted annual rate of 1.15 million. “This month’s uptick in production is an indicator that the housing market continues to move forward,” said NAHB Chairman Ed Brady. “At the same time, builders are adding inventory at a cautious pace as they face lot shortages and regulatory hurdles.” “The June report is consistent with our forecast for a gradual but consistent recovery of the housing market,” said NAHB Chief Economist Robert Dietz. “Single-family production should continue to strengthen throughout the year, buoyed by job growth, new household formations and low mortgage interest rates.” Single-family housing starts rose 4.4 percent to a seasonally adjusted annual rate of 778,000 units in June while multifamily production ticked up 5.4 percent to 411,000 units. Regionally in June, combined single- and multifamily starts increased in the Northeast and West, with respective gains of 46.3 percent and 17.4 percent. The Midwest registered a 5.2 percent loss and the South fell 3.4 percent. However,

single-family production rose in all four regions. Both sectors posted permit gains. Single-family permits edged up 1 percent to a rate of 738,000 while multifamily permits rose 2.5 percent to 415,000. Permit issuance increased 9.4 percent in the Northeast and 8.3 percent in the South. Meanwhile, the Midwest and West registered respective losses of 2.8 percent and 10.1 percent. Builder confidence rises two points Builder confidence in the market for newly built, single-family homes in July fell one point to 59 from a June reading of 60 on the National Association of Home Builders/Wells Fargo Housing Market Index (HMI) released recently “For the past six months, builder confidence has remained in a relatively narrow positive

the remodeling market for 2016,” said NAHB Chief Economist Robert Dietz. “Current economic conditions and a rising need to improve the nation’s aging housing stock in the face of changing demographics are supporting growth for the remodeling sector.” For data tables on the RMI, visit www.nahb. org/rmi. For more information about remodeling, visit www.nahb.org/remodel. n

range that is consistent with the ongoing gradual housing recovery that is underway,” said Brady. “However, we are still hearing reports from our members of scattered softness in some markets, due largely to regulatory constraints and shortages of lots and labor.” “The economic fundamentals are in place for continued slow, steady growth in the housing market,” said Dietz. “Job creation is solid, mortgage rates are at historic lows and household formations are rising. These factors should help to bring more buyers into the market as the year progresses.” Derived from a monthly survey that NAHB has been conducting for 30 years, the NAHB/ Wells Fargo Housing Market Index gauges builder perceptions of current single-family home sales and sales expectations for the next six months as “good,” “fair” or “poor.” The survey also asks builders to rate traffic of prospective buyers as “high to very high,” “average” or “low to very low.” Scores for each component are then used to calculate a seasonally adjusted index where any number over 50 indicates that more builders view conditions as good than poor. All three HMI components edged lower in July. The components measuring current sales expectations and buyer traffic each fell one point to 63 and 45, respectively. The index measuring sales expectations in the next six months posted a three-point decline to 66. The three-month moving averages for regional HMI scores held remarkably steady. The Northeast, Midwest and South were unchanged at 39, 57 and 61, respectively. The West edged one point higher to sixty-nine. n

Housing a priority for most Americans

n overwhelming 4 of 5 Americans believe that owning a home is a good investment, according to a recent poll that NAHB commissioned to gauge public sentiment on the value of homeownership and government programs that encourage homeownership and housing production. “The survey shows that most Americans be-

lieve that owning a home remains an integral part of the American Dream and that policymakers need to take steps to encourage and protect homeownership,” said NAHB Chairman Ed Brady. Among the key findings: - 82 percent rate “a home for you to live in” a good or excellent investment (the highest of six choices), far ahead of the second option, retirement accounts, at 67 percent. - 81 percent of 18-29-year-olds want to buy a home. - 72 percent support the government providing tax incentives to encourage homeownership. - 46 percent say now is a good time to buy a home, twice the 23 percent who say it is not. - 36 percent would like to buy a home in the next three years. - 55 percent said the biggest obstacle to buy-

-ing a home was finding a home at a price you can afford, followed by 50 percent who cited insufficient savings for a down payment and 41 percent who reported difficulty getting approved for a home loan. The survey was evenly split on which presidential candidate would be best for housing. Thirty-eight percent of the respondents cited Hillary Clinton, 37 percent Donald Trump, and 25 percent “don’t know” or “no opinion.” For more survey results see the “Truth in Numbers” breakdown on the next page. For a copy of the full survey, please contact Stephanie Pagan at spagan@nahb.org. Click here for survey highlights or go to http://www.nahb.org/~/media/Sites/NAHB/ news-and-publications/press-releases/160703_ topline_v1_TB_GENPOP4.ashx. n August, 2016

HBAMT REMODELERS COUNCIL Council President - Ricky Scott. The HBAMT Remodelers Council meets on the third Wednesday of the month, 11:00 a.m. at varying locations. Next meeting: Wednesday, August 17. Location and topic: to be announced. Price: free for RMC members with RSVP; $15 for non-members with RSVP ($20 w/o). Council RSVP Line: 615/377-9651, ext. 301

INFILL BUILDERS COUNCIL The Infill Builders meets on the third Thursday of the month, 11:30 a.m. at the HBAMT offices until further notice. Next meeting: to be announced. Council RSVP Line: 615/377-9651, ext. 311 MIDDLE TENN SALES & MARKETING COUNCIL Council President - Jody Derrick. The SMC meets on the first Thursday of the month, 9:00 a.m. at the HBAMT offices. Next meeting: Thursday, August 4, 9:00 a.m. at the HBAMT. Topic: “Mortgage Credit Certificates from THDA.” First time home buyer’s may be eligible for $2,000 per year tax credit for up to 30 years on new construction purchases! Join the SMC next Thursday, August 4 to learn how the THDA program can work for your potential buyers. SMC members free thanks to Ole South Properties; non-SMC members $25 w/RSVP, $35 w/o RSVP Council RSVP Line: 615/377-9651, ext. 302.

The August, 2016 issue of The Nail, the official monthly publication of the Home Builders Association of Middle Tennessee (HBAMT).

The August, 2016 issue of The Nail, the official monthly publication of the Home Builders Association of Middle Tennessee (HBAMT).