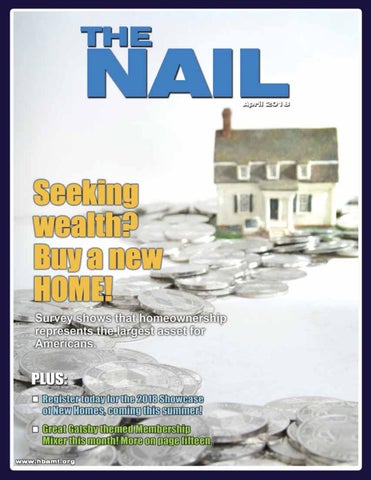 Survey shows that the primary residence is the largest asset for American households.

Donâ&#x20AC;&#x2122;t miss the next Membership Mixer, a Great Gatsby themed event hosted by the Sales and Marketing Council.

ales of newly built, single-family homes remained virtually unchanged, inching down 0.6 percent in February to a seasonally adjusted annual rate of 618,000 units after upward revisions to the January, December and November reports, according to newly released data by the U.S. Department of Housing and Urban Development and the U.S. Census Bureau. “New home sales are at a steady level, which is consistent with our measures of solid builder confidence in the housing market,” said NAHB Chairman Randy Noel, a custom home builder from LaPlace, La. “As hous-

Upward revisions to the sales numbers reflect our forecast for a gradual strengthening of the single-family housing sector. 8 The NAIL

ing demand grows, builders need to manage increasing costs for labor, lots and building materials to keep their homes competitively priced.” “The recent upward revisions to the sales numbers reflect our forecast for a gradual strengthening of the single-family housing sector in 2018,” said NAHB Chief Economist Robert Dietz. “Demographic tailwinds point to higher demand for single-family homes in the months ahead. Combined with solid job market data, we expect more consumers to enter the housing market this year.” The inventory of new home sales for sale was 305,000 in February, which is a 5.9-month supply at the current sales pace. The median sales price of new houses sold was $326,800. Regionally, new home sales rose 19.4 percent in the Northeast and 9 percent in the South. Sales decreased 3.7 percent in the Midwest and 17.6 percent in the West. n

decline in multifamily starts pushed overall housing production down 7.0 percent in February to a seasonally adjusted annual rate of 1.24 million units, according to newly released data from the U.S. Department of Housing and Urban Development and the Commerce Department. Multifamily production fell 26.1 percent to a seasonally adjusted annual rate of 334,000 units after an exceptionally high January report. Meanwhile, single-family starts posted a 2.9 percent gain to 902,000 units. “The uptick in single-family production is consistent with our builder confidence readings, which have been in the 70s for four consecutive months,” said NAHB Chairman Randy Noel. “However, builders must manage rising construction costs to keep home prices competitive.” “Some multifamily pullback is expected after an unusually strong January reading. Multifamily starts should continue to level off throughout the year,” said NAHB Chief Economist Robert Dietz. “Meanwhile, the growth in single-family production is in line with our 2018 forecast for gradual, modest strengthening in this sector of the housing market.” Regionally in February, combined single- and multifamily housing production increased 7.6 percent in the Midwest. Starts fell 3.5 percent in the Northeast, 7.3 percent

in the South and 12.9 percent in the West. Multifamily weakness pushed overall permit issuance down 5.7 percent in February to a seasonally adjusted annual rate of 1.3 million units. Multifamily permits fell 14.8 percent to 426,000 while single-family permits were essentially unchanged, edging down 0.6 percent to 872,000. Permit issuance rose 12.7 percent in the Northeast and 3.4 percent in the Midwest. Permits declined 3.4 percent in the West and 12.4 percent in the South. Builder confidence on solid footing Builder confidence in the market for newly-built single-family homes edged down one point to a level of 70 in March from a downwardly revised February reading on the National Association of Home Builders/Wells Fargo Housing Market Index (HMI) but remains in strong territory.

“Builders’ optimism continues to be fueled by growing consumer demand for housing and confidence in the market,” said Noel. “However, builders are reporting challenges in finding buildable lots, which could limit their ability to meet this demand.” “A strong labor market, rising incomes and a growing economy are boosting demand for homeownership even as interest rates rise,” said Dietz. “With these economic fundamentals in place, the single-family sector should continue to make gains at a gradual pace in the months ahead.” Derived from a monthly survey that NAHB has been conducting for 30 years, the NAHB/ Wells Fargo Housing Market Index gauges builder perceptions of current single-family home sales and sales expectations for the next six months as “good,” “fair” or “poor.” The survey also asks builders to rate traffic of prospective buyers as “high to very high,” “average” or “low to very low.” Scores for each component are then used to calculate a seasonally adjusted index where any number over 50 indicates that more builders view conditions as good than poor. The HMI component gauging current sales conditions held steady at 77, the chart measuring sales expectations in the next six months dropped two points to 78, and the index gauging buyer traffic fell three points to 51. Looking at the three-month moving averages for regional HMI scores, the Northeast rose one point to 57, the South decreased one point to 73, the West fell two points to 79, and the Midwest dropped four points to 68. n

NAHB expects construction sector net hiring to continue in 2018 as the single-family construction market expands. However, as labor remains a top cited challenge to expansion, builders will increasingly explore options to find ways to build more with less. n

usic throughout the home can be beautiful. But the equipment that delivers that music can sometimes be unsightly. Sure, some clients are fine with exposed speakers, especially as some manufacturers are designing products that are more attractive — some may even say decorative. But for those who prefer a more stealthy delivery of tunes, there are now hundreds of products and solutions that can fit the bill. Speakers and subwoofers can disappear into a room with the proper planning and the right installer. A few examples: l Architectural speakers with removable covers. These in-wall or in-ceiling speakers are light enough to be clamped right to the drywall, and they’re usually hidden behind a magnetic grille. In-ceiling applications are perfect for distributed, multi-room audio applications and new cinematic immersive audio formats like 3-D audio, which creates a more lifelike effect.

l “Invisible” speakers. These gadgets are designed so that there’s minimal sonic degradation when they’re covered by any wall treatment, from mud to veneers — even plaster. l Acoustically transparent fabric. Any speaker with the proper baffling can be stashed behind the right fabric covering. In theater rooms that feature a projector-and-screen setup, the screen itself can be acoustically transparent to allow sound from the center channel speaker to pass through the screen and still be crystal clear. l Outdoor camouflage. Buried subwoofers and rock-shaped speakers are just some of the products that can turn a patio into a listening room.

Similarly, TV placement and installation is a hot-button topic among designers and home owners alike. Many end users desire placements that might seem impractical, and some would prefer their TV screens disappear completely when not in use.

Luckily, the fully articulated TV mount has evolved, allowing a TV to be safely hung in more obscure locations — or places once thought to offer typically poor sight lines (i.e., over the fireplace) — and then drop to proper eye level when being watched. For those who want the TV to go away entirely when it’s turned off, there are numerous options of motorized lifts and drives from which to choose. Sets can rise from the floor, drop from the ceiling or appear behind sliding doors and cabinets with the touch of a button. There are also options for those that decide late in the game they want to stash a TV. For example: l Samsung’s “The Frame TV” looks like a framed piece of art when it’s not in use as a television. l TVs hidden in bathroom mirrors are growing in popularity and can be integrated easily. l All-weather TVs can turn any porch or deck into its own entertainment space. With the right planning, any room in a new build or renovation job can be movie- or music-ready as soon as the studs go up. n

the lines show the changes in the shares of the primary residence, business interests and other financial assets. As shown in Figure 2, total assets were $3.7 trillion for households under age 35, while they were $35.6 trillion for households aged 65 or older. The aggregate value of assets held by families where the head was aged 65 or older was approximately 10 times

larger than those held by families where the head was under the age of 35. The increases in the total assets among age groups indicate that the value of assets grows with age groups. Moreover, the distribution of major assets on household balance sheets varies by age group. Across age groups where households were under the age of 55, the aggregate value

2018 Showcase of New Homes Entry Form (one form per entry)

Attached is my CHECK, PLANS (color house picture and floor plans), DIRECTIONS and DESCRIPTIONS. I am completing all sections of this form to be applied to the rate checked below.

SEE RATES AND DEADLINES ON REVERSE SIDE Please note: Money, completed entry form, color photo and floor plans must be returned before final dates to qualify for rate checked.

Please type or print. Fill in the blanks. This form must be complete.

List following information exactly as you would like it to appear in the Home Buyers Guide HOUSE AMENITIES and FACTS (this section is important for both promotional and production purposes).

Is this home furnished? Yes r No r

On a separate sheet of paper, type a brief description (about 75 words) on the unusual and outstanding features of your home. This description will be printed in the Showcase Home Buyers Guide (plan book) as it is submitted! THIS IS IMPORTANT! Attach explicit directions to the house starting from a major highway (remember, you may know how to get there but the general public does not!) These directions will be included in the plan book. Entries which have not submitted plans, descriptions and directions by May 18, 2018 will be omitted from the Home Buyers Guide. Please return completed form to: HBAMT - Showcase l 9007 Overlook Blvd, Brentwood, TN 37027 Phone: (615) 377-1055 l Fax: (615) 377-1077 l Email: jargo@hbamt.net 14 The NAIL

The April 2018 issue of The Nail, the official monthly publication of the Home Builders Association of Middle Tennessee (HBAMT).

The April 2018 issue of The Nail, the official monthly publication of the Home Builders Association of Middle Tennessee (HBAMT).