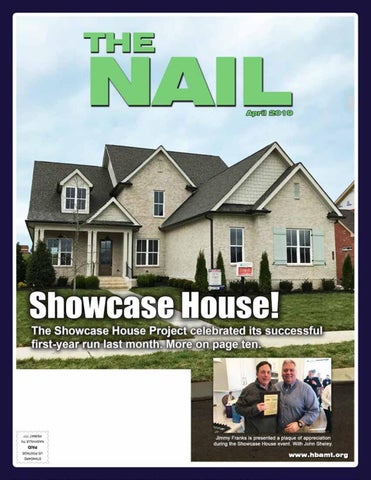 The HBAMT is in the process of updating its online directory of members. Help us improve the feature by providing additional details about your business.

15 Promotional opportunities at the 2019 Parade

Sign up now to participate as an advertiser or exhibitor at the 2019 James Hardie Parade of Homes at The Grove.

ON THE COVER: The 2019 Showcase House constructed by Tennessee Valley Homes in Thompsons Station. More details on page ten. April, 2019

ales of newly built, single-family homes posted a yearly gain of 1.5 percent in 2018, according to newly released data by the U.S. Department of Housing and Urban Development and the U.S. Census Bureau. The December sales numbers rose 3.7 percent to a seasonally adjusted annual rate of 621,000 units after a downwardly revised November report. The sales report was delayed due to the partial government shutdown. “The slight gain for 2018 new home sales reflects solid underlying demand for homeownership,” said NAHB Chairman Greg Ugalde, a home builder and developer from Torrington, Conn. “Housing affordability remains a challenge across the country, but conditions have improved in early 2019, as illustrated by the recent uptick in builder confidence.” “Despite a period of weakness in the fall, new home sales ended the year with a small gain,” said NAHB Chief Economist Robert Dietz. “While the December sales pace improved

on a monthly basis, the current rate of sales remains off the post-Great Recession trend due to housing affordability concerns made worse by the rise in mortgage interest rates at the end of the year. We expect lower mortgage rates in the early months of 2019 will lead to additional new home demand.” A new home sale occurs when a sales contract is signed or a deposit is accepted. The home can be in any stage of construction: not yet started, under construction or completed. In addition to adjusting for seasonal effects, the December reading of 621,000 units is the number of homes that would sell if this pace continued for the next 12 months. The inventory of new homes for sale continued to rise in December to 344,000 homes available for sale. A year prior, new single-family home inventory stood at 294,000. The median sales price increased in December to $318,600, although it is lower than a year ago when the median sales price was $343,300. This is primarily due to the rising use of price incentives and a slow change toward additional entry-level inventory. Regionally, on a total year basis for 2018, new home sales declined 16 percent in the Northeast and one percent in the West. Sales rose four percent in the South and six percent in the Midwest. n

otal housing starts rose 18.6 percent in January to a seasonally adjusted annual rate of 1.23 million units from a downwardly revised reading in December, according to a report from the U.S. Housing and Urban Development and Commerce Department that was delayed due to the partial government shutdown. The January reading of 1.23 million is the number of housing units builders would begin if they kept this pace for the next 12 months. Within this overall number, single-family starts surged 25.1 percent to 926,000 units. Meanwhile, the multifamily sector, which includes apartment buildings and condos, increased 2.4 percent to 304,000. “The bounce back in single-family starts mirrors our builder confidence surveys, as sentiment fell in the latter part of 2018 but rebounded in January after mortgage rates showed a notable decline,” said Greg Ugalde, chairman of the National Association of Home Builders (NAHB) and a home builder and developer from Torrington, Conn. “Some single-family projects that were on pause in December, meaning they were authorized but not started, went online in January. However, builders remain cautious as single-family permit numbers in January were somewhat soft,” said NAHB Chief Economist Robert Dietz. Regionally, combined single-family and multifamily starts in January rose 58.5 percent

AHB’s analysis of Census Data from the Quarterly Starts and Completions by Purpose and Design survey indicates custom home building was effectively flat over the course of 2018. There were 36,000 total custom starts for the fourth quarter of 2018. This was down compared to the final quarter of 2017 (40,000). Over the course of 2018, custom housing starts totaled 170,000. This was a 1.2% decline compared to 2017 (172,000). Note that this definition of custom home building does not include homes intended for sale, so the analysis uses a narrow definition of the sector. As measured on a one-year moving aver-

age, the market share of custom home building in terms of total single-family starts is now 19%, down from a cycle high of 31.5% set during the second quarter of 2009. The onset of the housing crisis and the Great Recession interrupted a 15-year long trend away from homes built on the eventual owner’s land. As housing production slowed in 2006 and 2007, the market share of this notfor-sale new housing increased as the number of single-family starts declined. The share increased because the credit crunch made it more difficult for builders to obtain AD&C credit, thus producing relatively greater production declines of for-sale single-family housing.

Recent declines in market share are due to an acceleration in overall single-family construction, especially in spec home building. As this part of the market cools due to declining affordability, the market share for custom homes will likely stabilize. n

Help us update the HBAMT directory

he association is currently in the process of updating and improving the HBAMT Membership Directory. We are on track to have the directory back online by the end of May. In an effort to enhance your ability to find and communicate with fellow HBAMT members, businesses, and services, we will be adding additional details to each listing to improve its effectiveness. This will also help the general public quickly identify your business when searching the directory. You should have received emails and letters from us detailing this information. If not, please take time to review the requested information below and respond with your preferred listing details.

PLEASE REPLY TO THE HBAMT WITH THE FOLLOWING THREE (3) PIECES OF INFORMATION: 1) Your website address. Please send us the exact URL that will link members and consumers directly to the page you want them to visit when they’re seeking you or your products and services.

2) A one-sentence description of your company. Please send us a one-sentence description of your company and the products and services you provide. For example: “XYZ Supply provides building supplies for both small and large construction projects throughout Tennessee.” Descriptions should be short and concise and not exceed more than 40-50 words. 3) The trade/service you would like your company’s listing to be found in the directory. Please let us know which trades and services would best serve your company in a directory. You may respond with up to three choices. Please list the BEST, most applicable listing for your company first. For example: “Building Supply, Lumber, Drywall Supply.” Your listing will still appear in directory search queries if we don’t receive your reply. We will add these new details when we receive your responses. If you’ve already responded to the emails or letters we’ve sent, thank you! If not, please take the time to return these details to us at your earliest convenience.

ennessee Valley Homes held an open house and dedication ceremony for the pilot project of the Spring Showcase House last month at the Bridgemore community in Thompsons Station. The project, spearheaded by Jimmy Franks and featuring a home built by Tennessee Valley Homes, raises funds through the sale of the house for the association to continue its support of the local home building industry.

Companies contributing to the construction of the house were recognized during the event and presented plaques of appreciation by Franks. A big thanks to everyone for your support of the project and the association. See page fourteen for a full list of these companies. And a very big thanks to Jimmy and the entire Tennessee Valley Homes team for their efforts in getting the project off the ground and making it such a successful endeavor in its first year. Way to go! n

If your company depends on new homes or related products, furnishings or services, here’s one opportunity you can’t pass up -- the 2019 James Hardie Parade of Homes at The Grove! Secure your space in the Plan Book or reserve an Exhibit Booth today.

At every Parade event each attendee is handed a magazine as they walk through the front gate - the Parade Plan Book.

Here’s your chance to demonstrate your product or service to the thousands of qualified prospects who pass through the Parade of Homes exhibit center when they enter and leave the show. As with Plan Book advertising, the exhib­it center produces virtually all pre-qualified customers!

It’s like opening up shop and having thousands of prospects visit your show­room the first two weeks you’re in business. What other medium could come close to producing those kinds of results? The Parade ranks first of all home shows in the nation and you can take advantage of the prestige this show enjoys. Exhibit Booth Price? $750 Each booth in the Parade of Homes exhibit center measures 10’ x 6’ at the front entrance where patrons must enter and exit -- perfect for eye-pop­ping kiosks and marketing publications!

PLAN BOOK AD - please check the size of ad you would like to secure in the 2019 Plan Book:

The “v-code” is found on the back of the card, usually printed or embossed atop or near the signature strip.

It is comprised of three digits found to the right of a longer number.

HBAMT REMODELERS COUNCIL Council President - David Crane. The HBAMT Remodelers Council meets on the third Wednesday of the month at varying locations. Next meeting: to be announced. 11 a.m. to 12:30 p.m. at a location to be determined. Topic: to be announced. Price: free with RSVP. Council RSVP Line: 615/377-9651, ext. 263

The April 2019 issue of The Nail, the official monthly publication of the Home Builders Association of Middle Tennessee (HBAMT).

The April 2019 issue of The Nail, the official monthly publication of the Home Builders Association of Middle Tennessee (HBAMT).