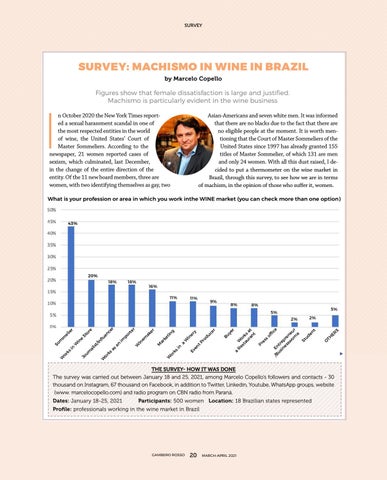 SURVEY: MACHISMO IN WINE IN BRAZIL by Marcelo Copello

Figures show that female dissatisfaction is large and justified. Machismo is particularly evident in the wine business

n October 2020 the New York Times reported a sexual harassment scandal in one of the most respected entities in the world of wine, the United States’ Court of Master Sommeliers. According to the newspaper, 21 women reported cases of sexism, which culminated, last December, in the change of the entire direction of the entity. Of the 11 new board members, three are women, with two identifying themselves as gay, two

Asian-Americans and seven white men. It was informed that there are no blacks due to the fact that there are no eligible people at the moment. It is worth mentioning that the Court of Master Sommeliers of the United States since 1997 has already granted 155 titles of Master Sommelier, of which 131 are men and only 24 women. With all this dust raised, I decided to put a thermometer on the wine market in Brazil, through this survey, to see how we are in terms of machism, in the opinion of those who suffer it, women.

THE SURVEY- HOW IT WAS DONE The survey was carried out between January 18 and 25, 2021, among Marcelo Copello’s followers and contacts - 30 thousand on Instagram, 67 thousand on Facebook, in addition to Twitter, Linkedin, Youtube, WhatsApp groups, website (www. marcelocopello.com) and radio program on CBN radio from Paraná. Dates: January 18-25, 2021

Profile: professionals working in the wine market in Brazil 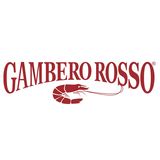