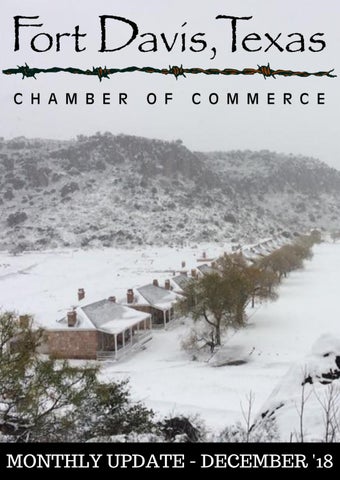 COVER PHOTO - A look at Fort Davis NHS a few years back as a blanket of snow covers the grounds. Ranger Flores/NPS. Will there be a white Christmas this year? We&#39;ll see!

to become a member of the Fort Davis Chamber of Commerce

Join or renew today Send an email to INFO@fortdavis.com

There&#39;s a whole lotta hiking going on over at Davis Mountains State Park. Ranger Ty and crew have a had a busy year, full of many miles on the trail. Pictured above is one of the many groups who made the trek to the top of the State Park during one of several High Point Hikes. Below is a sweet, furry companion that accompanied hiker Dawn Healey on a Homeless Dog Hike. The State Park, in conjunction with Grand Companions offer folks a weekly chance of making a new four-legged best friend.

What do live music, fireworks, a parade, a cowboy hypnotist, tasty food, and the best shade trees in Jeff Davis County have in common?

The Coolest Fourth of July in Fort Davis! Summer rain showers welcomed in another iteration of our annual nation celebration. Live music, vendors, acts of comedy, and fireworks greeted visitors from near and far to Jeff Davis County. Above is Case Southerland on guitar with Aaron Kinzie on drums playing the Courthouse stage. Below is Joe Davila Y Los Jetliners starting off their set at the Kelly Pavilion. Make plans now to come out 2019&#39;s party!

INTO THE GREAT, WILD OPEN

open days at the Nature Conservancy&#39;s Davis Mountains Preserve offer a glimpse into some of the most rugged land Texas has to offer.

The Preserve boasts over 100,000 acres of pristine Davis Mountains land that is periodically opened to the public for hiking and camping. See 2019 events page for scheduled open days next year.

The ever popular annual gathering of birding enthusiasts resumed this past summer. Folks from far and wide came together in far west Texas to set out and see the amazing variety of hummers that pass through these parts every year .

The best music festival on either side of the Pecos River returned to far west Texas in 2018. Here in Fort Davis we were treated to live music from Glen Moreland, Pike &amp; Sutton, John Evans Band (pictured), and Frontera Bugalu, all setting up to get down at the Kelly Pavilion. We&#39;ll announce the line up for Viva Big Bend 2019 as soon as it&#39;s released, so be sure to follow us on social media!

It&#39;s no secret that Fort Davis is a hub for cyclists. With miles and miles of rideable highways through scenic vistas, far west Texas is a natural choice for those who choose to venture on two wheels. In September of this year, we saw the Fort Davis Cyclefest make a return, and had a new additon - the Bike Rodeo. The rodeo was started by the Chamber and enabled by volunteers - it&#39;s purpose to teach bike safety to the kiddos who were getting their first taste of mobile freedom.

Intrepid hikers struck out one late October evening to take in a view that only night time critters get to see. The Chamber, alongside our good friends at CDRI, hosted a moonlit hike to Clayton&#39;s Overlook, a natural vantage point in order to take in the peaceful surroundings of the high desert illuminated by a full moon. The good news is, that this event was so well received, we&#39;re looking into the possibility of a full moon hike series for 2019. Stay tuned!

The inaugural Livermore Hunger Challenge had hikers top the highest point in the Davis Mountains Range for a good cause, and history came alive at FD NHS with their Lantern Night Tour. Both events were held on the same day.Â

The Thanksgiving season meant it was time to head to the Food Pantry of Jeff Davis County for another helping of tasty homemade goods.

Late 2018 brought on another opportunity for the community to make it&#39;s voice heard by voting. Early voting numbers had about 47% of residents turning out to cast ballots before November 6th.

December 8th marked 2018&#39;s Frontier Christmas celebration. Santa made an early stop in far west Texas that Saturday to be the centerpiece of the parade, and made sure to get Fort Davis kids wish lists correct over at the Jeff Davis County Library. Pictured above is Santa in the parade going down main street, to the left is kiddos learning proper ginger bread house building techniques, and below is the jolly fellow posing for a picture with Myra Meads and Russel Roach in front of St Joseph&#39;s Catholic

Grand Companion&#39;s mission is to help people save, honor, and connect with pets. Established in 1989, Grand Companion provides a feasible solution for the health and moral problems communities encounter with homeless pets. You are encouraged to stop by and take a look at what critters are currently at Grand Companions. Who knows? You may end up going home with a new best friend!

High Desert Snow Yes, it snows in far west Texas. Fort Davis saw it&#39;s first 100% verifiable snowfall of 2018 on December 13, 2018. What started as a gnarly cold front ended in big snowflakes and light accumulation across the area. Pictured above is a shot courtesy of Fort Davis NHS showing the start of the winter storm.

Just in time for the holidays! Get your very own, genuine, Fort Davis rain gauge! Keep up with the rain totals next monsoon season in style. Custom rain gauges are now for sale at the Chamber office.

&quot;What&#39;s goin&#39; on out there, anyways?&quot; Stay up to date with us out here in the coolest place in Texas. You can follow us on social media, shoot us emails, or just holler at us in office. Thanks for following along y&#39;all!

&quot;The desert is natural; when you are out there, you can get in tune with your environment, something you lose when you live in the city.&quot; -Robyn Davidson photo: Lee Hoy 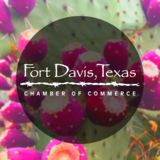