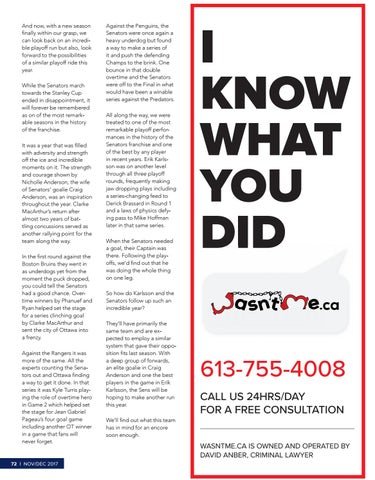 And now, with a new season finally within our grasp, we can look back on an incredible playoff run but also, look forward to the possibilities of a similar playoff ride this year. While the Senators march towards the Stanley Cup ended in disappointment, it will forever be remembered as on of the most remarkable seasons in the history of the franchise. It was a year that was filled with adversity and strength off the ice and incredible moments on it. The strength and courage shown by Nicholle Anderson, the wife of Senators’ goalie Craig Anderson, was an inspiration throughout the year. Clarke MacArthur’s return after almost two years of battling concussions served as another rallying point for the team along the way. In the first round against the Boston Bruins they went in as underdogs yet from the moment the puck dropped, you could tell the Senators had a good chance. Overtime winners by Phanuef and Ryan helped set the stage for a series clinching goal by Clarke MacArthur and sent the city of Ottawa into a frenzy. Against the Rangers it was more of the same. All the experts counting the Senators out and Ottawa finding a way to get it done. In that series it was Kyle Turris playing the role of overtime hero in Game 2 which helped set the stage for Jean Gabriel Pageau’s four goal game including another OT winner in a game that fans will never forget.

Against the Penguins, the Senators were once again a heavy underdog but found a way to make a series of it and push the defending Champs to the brink. One bounce in that double overtime and the Senators were off to the Final in what would have been a winable series against the Predators. All along the way, we were treated to one of the most remarkable playoff performances in the history of the Senators franchise and one of the best by any player in recent years. Erik Karlsson was on another level through all three playoff rounds, frequently making jaw dropping plays including a series-changing feed to Derick Brassard in Round 1 and a laws of physics defying pass to Mike Hoffman later in that same series. When the Senators needed a goal, their Captain was there. Following the playoffs, we’d find out that he was doing the whole thing on one leg.

I KNOW WHAT YOU DID

So how do Karlsson and the Senators follow up such an incredible year? They’ll have primarily the same team and are expected to employ a similar system that gave their opposition fits last season. With a deep group of forwards, an elite goalie in Craig Anderson and one the best players in the game in Erik Karlsson, the Sens will be hoping to make another run this year. We’ll find out what this team has in mind for an encore soon enough.

613-755-4008 CALL US 24HRS/DAY FOR A FREE CONSULTATION WASNTME.CA IS OWNED AND OPERATED BY DAVID ANBER, CRIMINAL LAWYER