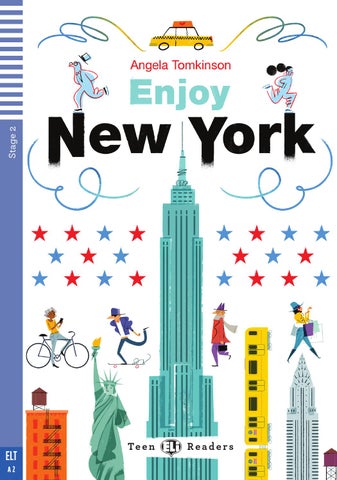 In this reader you will also find: - Glossary of difficult words - After-reading activities - An audio recording of the book - Stunning photos of New York Things to do

Letâ&#x20AC;&#x2122;s all go to the Big Apple! Come with us on our A-Z journey to one of the most exciting and fun cities in the world. Do you want to know whatâ&#x20AC;&#x2122;s the tallest building in New York? Or what New Yorkers like doing in their free time? Would you like to learn about the food people eat in New York ? Or which famous people are from this city? You can discover the answers to these questions and learn much more about the people, places and things in the city that never sleeps. Enjoy the book! Enjoy New York!

In New York there are about 5,845 skyscrapers*. One of these is the Empire State Building. It’s on the famous 5th Avenue in Manhattan. It takes its name from one of the nicknames* of New York – the Empire State.

When it was built in 1931, it was the world’s tallest building for almost 40 years and it’s now America’s fourth tallest building. It has 102 floors and from the top you can see a wonderful view of New York.

This unusual building was built in 1902 and at that time it was one of the tallest buildings in New York. The people of New York thought that when it was windy, the building would fall down. It’s a symbol* of New York and in 1989 it became a ‘National Historic Landmark*’. One World Trade Center

This building was built where the World Trade Center stood until September 11th 2001. It stands at 541.3 meters and it’s the fourth tallest building in the world. It was built in 2006 and

finally opened on November 1st 2014. It has 104 floors and at the top there is the One World Observatory where you can see amazing views of New York.

skyscraper: a very tall building nickname: when people give you an informal name symbol: (here) when people think of this building, they think of New York National Historic Landmark: a title given to places of historical importance 16

You can find this little house at 75½ Bedford Street in Greenwich Village. It’s only 3 meters wide and some very famous people have lived there, such as the actor Cary Grant. In August 2013 someone bought the house for $3.25 million. New York’s oldest building

This very old building was built in 1652 and it’s the oldest building in New York. It’s in Brooklyn and was built by Dutch immigrants

who came to live in the city. Now it’s a museum where you can learn about life in the past and what it was like to live there.

On the outside you could think that it’s a normal house but behind the front wall there are no rooms or a family living there. Near the house there’s the subway and behind it there’s a tunnel that people can use if something goes wrong on the subway. Did you know…?

New York is home to the United Nations. Its building is in Manhattan near the East River and has been there since 1952.

27 Maybe you’ll be surprised to hear this, but New York is a very green city. There are more than 1,700 parks and 14% of the city is green. People use these green areas to relax and to do sport. Let’s learn more! Central Park

This is the biggest and most famous park in New York. In 1962 it became a National Historic Landmark and about 37.5 million people visit the park every year. So what can you do there?

Anything you want! There are green areas for doing sport or just relaxing. There are several lakes as well as two places to do iceskating, one of which becomes a swimming pool in the summer.

There is also an outside theater where it’s possible to watch some of Shakespeare’s plays in the summer months. The park even has its own police station inside!

A part of the park is a monument to John Lennon. After he died, many different countries sent trees to the park and they built an area called ‘Strawberry Fields’ to remember him. Central Park Zoo

Inside the park there’s also a zoo. it in many different films such as It’s quite a small zoo and has been the animated film Madagascar, The there since the 1860s. You can see Wild and Mr Popper’s Penguins. Bronx Zoo

This is one of the biggest zoos in the world. Inside there are about 6,000 animals and 650 different species. So what do people like most about the zoo? Well, visitors love the Congo Gorilla Forest and the Wild Asia

Monorail the best. Of course, they love watching all the other animals too. But the star of the zoo has to be Leo the Snow Leopard. He came to the zoo as a baby in 2006 after his mum died in Pakistan and he’s lived in the zoo since then. His story was made into a book. A very clever elephant!

zoo. Everyone in the zoo said they didn’t write them so some people believed that

Gunda the elephant wrote them! What do you think?

In 1916, the Bronx Zoo built the world’s first animal hospital inside the zoo. The High Line

It’s a very popular green area in New York. It was a train track that isn’t used anymore and was built above the ground. There you can see lots of different wild plants and some interesting art and architecture. Gardens on the roof

New York also has a lot of ‘secret’ gardens that you can’t see from the street. You have to look up

to the sky as many of them are on top of the buildings! Many bars, hotels and restaurants have

roof gardens but also many private homes have one too! So don’t look down but look up!

1 How many boroughs are there in New York? 2 Which building in New York is the fourth tallest in the world? 3 Which museum of art opened in 1870 and is near Central Park? 4 What’s the ‘American Dream’? 5 What happens on the last Thursday of November in the USA? 6 What happens in the book Extremely Loud and Incredibly Close? 7 Can you remember five different ways to get around New York? 8 When did New Amsterdam become New York? 9 Who was the first person to pass through Ellis Island in 1892? 10 Can you name some jobs that New Yorkers do? 11 If you want to buy a teddy bear, a doll and a toy car which famous shop can you go to? 12 What’s the name of New York’s biggest train station? 13 Who was George Gershwin? 14 Do you remember five different nicknames for New York? 15 Why is Philadelphia an important city? 16 Which famous people were born in New York? 17 Can you remember any of the quotes about New York? 18 What are some of the things you can do in New York in your free time? 19 Who are the New York Yankees and the New York Mets? 20 What’s Broadway famous for? 21 What can you find at 767 Third Avenue? 22 Can you name three places where you can get great views of New York? 23 What happens every morning at 9.30 at the New York Stock Exchange? 24 Where can you find the biggest Christmas tree in New York? 25 What did a German butcher start selling in Coney island in 1871? 26 Where can you find 6,000 animals in New York? 66

Can you find fifteen words words about New York in the word search?