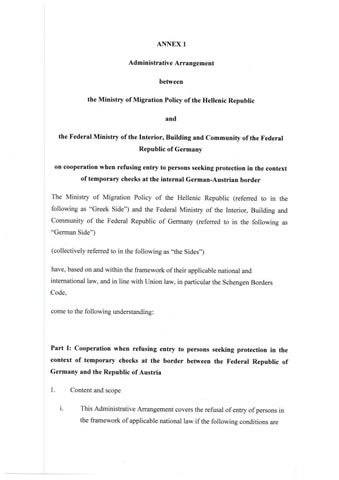 Part I: Cooperation when refusing entry to persons seeking protection in the context of temporary checks at the border between the Federal Republic of Germany and the Republic of Austria 1.

The person has been identified during a check at the border between the Federal Republic of Germany and the Republic of Austria and is to be refused entry.

The person is not an unaccompanied minor at the time of identification.

The person has expressed a desire for international protection.

In the cases of subsection (i), the Greek Side will readmit the person after being notified that the German Side has refused entry.

The responsible authority for the German Side will provide notification of refusal of entry in English via fax or e-mail to the Greekâ&#x20AC;&#x2122;s Side responsible authority using the form provided in Annex 2. This notification will include the following information: a) Eurodac ID number b) photo c) travel data d) date and place of apprehension.

Notification will be sent as soon as it has been determined that the conditions of No. 1 (i) have been met and transfer has been arranged in accordance with No. 3 (i). A mechanism for the automatic confirmation of the receipt of the notification will be provided by the Greek side.

The German Side refusing entry may return the person by air only, at the Athens International Airport. The return should be initiated no more than 48 hours after the person has been apprehended at the border between the Federal Republic of Germany and the Republic of Austria, unless the Greek Side objects to the return within six hours from the automatic confirmation of receipt of the notification, demonstrating why the conditions of Part I, No. 1 have not been met.

ii. The Greek Side will allow the person to enter, unless it has objected to the return within six hours from the automatic confirmation of receipt of the notification, demonstrating why the conditions of Part I, No. 1 have not been met.

Refusal of entry in error If the Greek Side demonstrates within seven days of readmitting the person that the conditions of Part I, No. 1 (i) have not been met, the German Side will readmit the person without delay.

ii. The Sides will inform each other immediately in writing of any changes to the responsible authorities or their address/contact information. 6.

Costs of transfer following refusal to entry i.

The German Side will pay all costs associated with the refusal of entry until the person refused entry arrives in the territory of the Hellenic Republic.

In case of Part 1, No. 4 the German Side will pay all travel costs associated with a readmission of the person.

Accepted and Pending ‘take charge’ requests The German Side will swiftly conclude family réunifications in the framework of the Regulation (EU) No 604/2013 of the European Parliament and the Council of 26 June 2013 establishing the criteria and mechanisms for determining the Member State responsible for examining an application for international protection lodged in one of the Member States by a third-country national or a stateless person (recast) (Dublin III Regulation), with respect to ‘take charge’ requests submitted by the Greek Dublin Unit that have been already accepted by the German Dublin Unit before 1 August 2018. The German Side will conclude the examination of all ‘take charge’ requests that have been submitted before 1 August 2018 and have not been examined yet within two months of the beginning of the cooperation between the both Sides based on this Administrative Arrangement. The number of persons to be transferred from Greece to Germany is capped at 600 persons per month. Transfers will be carried out both by charter and commercial flights. These family réunifications will be concluded by the end of 2018.

Future ‘take charge’ requests Any requests after 31 July 2018 will be dealt with according to the procedures as laid down in the Dublin III Regulation, as well as the respective Implementing Regulations (including the given time limits for submitting or answering a request as well as for transfers).

Side, the transfer of the person concerned will be carried out within six months of acceptance of the request. 10.

The following documents, if available, will be considered evidence, when submitted in relation to a currently pending request for re-examination: i) identification documents (passport or ID); ii) birth/marital status certificate, where appropriate; iii) family booklets, where appropriate, iv) transcript of interview.

Review of implementation and dispute settlement i.

The two Sides will establish a committee, composed of 3 members appointed by each Side, which will review the implementation of this Administrative

Arrangement on a three-month basis. ii. The two Sides will settle disputes arising from the interpretation or application of this Administrative Arrangement solely through negotiation. 15.

Beginning and ending of the cooperation and changes i.

The cooperation between the Sides based on this Administrative Arrangement will start the day of the reply to the letter to which it is annexed.

ii. This cooperation can be unilaterally discontinued. In order to avoid misunderstandings and inconveniences, the discontinuing Side should inform the other Side in writing at least three weeks beforehand. This Administrative Arrangement will also discontinue upon entry into force of the revised Common European Asylum System.

Notification of refusal of entry On

, the person whose file is stored under the Eurodac ID number

and whose photo is attached was apprehended in a check at the border between the Federal Republic of Germany and the Republic of Austria at [location] in the attempt to enter [Side refusing entry]. This person does not meet the conditions for entry and has expressed a desire for international protection. A search of the Eurodac system shows that this person applied for asylum with [authority] in [readmitting Side] on

In accordance with No. 2 of the Administrative Arrangement between the Ministry of Migration Policy of the Hellenic Republic and the Federal Ministry of the Interior, Building and Community of the Federal Republic of Germany dated [date], this document serves as notification that this person has been refused entry and is being returned to [readmitting Side], Flight: â&#x2013;Ą By air Flight number: Scheduled departure on [date] at [time] from [departure airport] Scheduled arrival on [date] at [time] at Athens International Airport 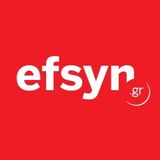