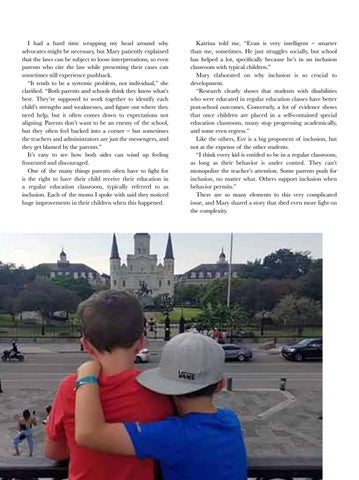 I had a hard time wrapping my head around why advocates might be necessary, but Mary patiently explained that the laws can be subject to loose interpretations, so even parents who cite the law while presenting their cases can sometimes still experience pushback. “It tends to be a systemic problem, not individual,” she clariﬁed. “Both parents and schools think they know what’s best. They’re supposed to work together to identify each child’s strengths and weaknesses, and ﬁgure out where they need help, but it often comes down to expectations not aligning. Parents don’t want to be an enemy of the school, but they often feel backed into a corner – but sometimes the teachers and administrators are just the messengers, and they get blamed by the parents.” It’s easy to see how both sides can wind up feeling frustrated and discouraged. One of the many things parents often have to ﬁght for is the right to have their child receive their education in a regular education classroom, typically referred to as inclusion. Each of the moms I spoke with said they noticed huge improvements in their children when this happened.

Katrina told me, “Evan is very intelligent – smarter than me, sometimes. He just struggles socially, but school has helped a lot, speciﬁcally because he’s in an inclusion classroom with typical children.” Mary elaborated on why inclusion is so crucial to development. “Research clearly shows that students with disabilities who were educated in regular education classes have better post-school outcomes. Conversely, a lot of evidence shows that once children are placed in a self-contained special education classroom, many stop progressing academically, and some even regress.” Like the others, Eve is a big proponent of inclusion, but not at the expense of the other students. “I think every kid is entitled to be in a regular classroom, as long as their behavior is under control. They can’t monopolize the teacher’s attention. Some parents push for inclusion, no matter what. Others support inclusion when behavior permits.” There are so many elements to this very complicated issue, and Mary shared a story that shed even more light on the complexity. 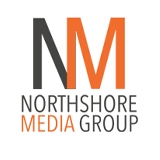