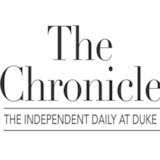 Durham, United States The Chronicle, the independent daily newspaper at Duke University, is actually older than the University itself. The first issue of The Trinity Chronicle was published Dec. 19, 1905. Trinity College became Duke University in 1924, and the newspaper continued to cover campus news and the world around it, evolving from a weekly newspaper to a bi-weekly and then a tri-weekly in the middle of a century and finally to a weekday daily in 1968. With a circulation of about 10,000