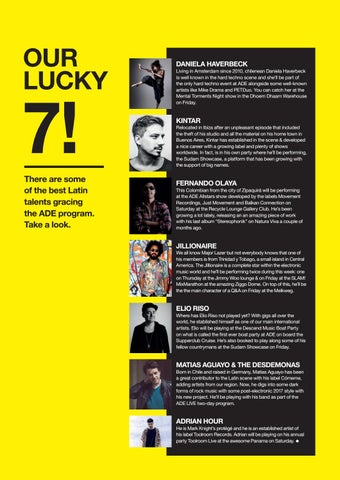 There are some of the best Latin talents gracing the ADE program. Take a look.

DANIELA HAVERBECK Living in Amsterdam since 2010, chilenean Daniela Haverbeck is well known in the hard techno scene and she’ll be part of the only hard techno event at ADE alongside some well-known artists like Mike Drama and PETDuo. You can catch her at the Mental Torments Night show in the Dhoem Dhaam Warehouse on Friday.

KINTAR Relocated in Ibiza after an unpleasant episode that included the theft of his studio and all the material on his home town in Buenos Aires, Kintar has established in the scene &amp; developed a nice career with a growing label and plenty of shows worldwide. In fact, is in his own party where he’ll be performing, the Sudam Showcase, a platform that has been growing with the support of big names.

FERNANDO OLAYA This Colombian from the city of Zipaquirá will be performing at the ADE Allstars show developed by the labels Movement Recordings, Just Movement and Balkan Connection on Saturday at the Recycle Lounge Gallery Club. He’s been growing a lot lately, releasing an an amazing piece of work with his last album “Stereophonik” on Natura Viva a couple of months ago.

JILLIONAIRE We all know Major Lazer but not everybody knows that one of his members is from Trinidad y Tobago, a small island in Central America. The Jillionaire is a complete star within the electronic music world and he’ll be performing twice during this week: one on Thursday at the Jimmy Woo lounge &amp; on Friday at the SLAM! MixMarathon at the amazing Ziggo Dome. On top of this, he’ll be the the main character of a Q&amp;A on Friday at the Melkweg.

ELIO RISO Where has Elio Riso not played yet? With gigs all over the world, he stablished himself as one of our main international artists. Elio will be playing at the Descend Music Boat Party on what is called the first ever boat party at ADE on board the Supperclub Cruise. He’s also booked to play along some of his fellow countrymans at the Sudam Showcase on Friday.

MATIAS AGUAYO &amp; THE DESDEMONAS Born in Chile and raised in Germany, Matias Aguayo has been a great contributor to the Latin scene with his label Cómeme, adding artists from our region. Now, he digs into some dark forms of rock music with some post-electronic 2017 style with his new project. He’ll be playing with his band as part of the ADE LIVE two-day program.

ADRIAN HOUR He is Mark Knight’s protégé and he is an established artist of his label Toolroom Records. Adrian will be playing on his annual party Toolroom Live at the awesome Panama on Saturday. u 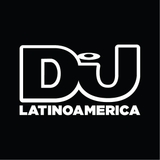