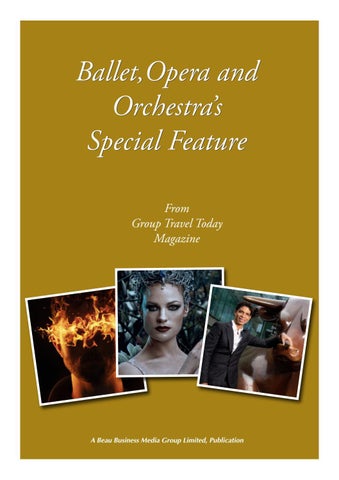 Once considered elitist and not something particularly for the groups market, these days taking a group to the ballet, opera or an orchestral performance, now figures prominently on the radar of group travel organisers. With special group rates, behind the scenes tours and even free tickets for the group’s leader, Hugh Cairns reports on some of those companies keen to welcome you and your group.

are handled by the venue box office teams. If you are bringing a group to a Birmingham Royal Ballet performance, they may be able to offer an additional talk or activity either before or on the day of your visit. If you are interested, please contact Kate Howells, Head of Marketing, as your first point of contact at katehowells@brb.org.uk.

Handel’s opera Amadigi is one of his finest, though rarely performed. Based on

Ballet’s dancers and the Royal Ballet Sinfonia weave their magic. Then in Spring 2022 a new production created especially for Birmingham Royal Ballet, Don Quixote introduces us to Cervantes’ famous knight himself, lovers Kitri and Basilio, and a host of supporting characters. As the Don sets out on a quest to track down his true love, with his loyal friend and servant Sancho Panza at his side, he finds himself embroiled in an unlikely adventure of love and dreams. Carlos Acosta said, “I want to define what it is to be a world-leading classical ballet company in the 21st century.” Acosta, for 17 years a principal at the Royal Ballet, is regarded as one of the greatest dancers in the world&quot; Aside from its performance at Birmingham Symphony Hall and Birmingham Hippodrome, the Birmingham Royal Ballet tours nationally throughout the year at many regional theatres, including; London, Plymouth, Salford, Southampton and Sunderland. Group bookings

One of the world’s great ballet companies, touring to venues across England, now under the directorship of Carlos Acosta. Great group discounts available and potential for additional activities for your group.

until one month before the concert. Call 020 7840 4205, email groups@lpo.org.uk or visit lpo.org.uk/groups to find out more. Live music is back in Birmingham The City of Birmingham Symphony Orchestra is at the heart of musical life in the Midlands, and one of the world’s great orchestras.

an immensely popular chivalric romance about three young people imprisoned by a sorceress, Amadis de Gaula, Handel’s version is brimming with youthful vigour, humour and tears. The miracle is that Handel, a secretive bachelor, could so vividly depict the delirious highs and savage lows to which love can reduce us all, from the pure romance of Amadigi and Oriana to the disastrous effects of rejection on Melissa and Dardano. William Towers and Tim Morgan share the role of the knight Amadigi opposite Francesca Chiejina and Jenny Stafford as the sorceress Melissa, Rebecca Afonwy-Jones as Dardano, Amadigi’s companionturned-rival, and Harriet Eyley as Oriana, the daughter of the King of the Fortunate Isles. This new production with English Touring Opera’s period orchestra partner, the Old Street Band, is conducted by Jonathan Peter Kenny, directed by James Conway, and designed by Neil Irish with Rory Beaton and Harry Pizzey. www.englishtouringopera.org .uk Tel: 020 7833 2555

A new season awaits with the London Philharmonic Orchestra

With 35 concerts to choose from between September 2021 and May 2022, the LPO invites groups to feel the power of live orchestral music, as audiences are finally welcomed back to the Southbank Centre’s Royal Festival Hall. Here are just some of the highlights of what promises to be a fantastic season. A new era: Edward Gardner and Karina Canellakis conduct their first concerts as Principal Conductor and Principal Guest Conductor. Gardner opens the season with Tippett’s The Midsummer Marriage (25 Sep 2021), and also conducts Berlioz’s Symphonie fantastique and Bartók’s Bluebeard’s Castle. Canellakis conducts Sibelius’s Symphony No. 5, Shostakovich’s Symphony No. 10, and with music by Scriabin, John Adams, Beethoven and Gershwin, there really is something for everyone.

On 25 March 2022, the Orchestra performs a concert of film music, featuring excerpts from Howard Shore’s Lord of the Rings Symphony and Danny Elfman’s Batman Suite. Groups of 10+ receive a 20% discount, and groups of 20+ receive a 20% discount plus 2 complimentary tickets for group organisers. No booking fees apply, and bookings have flexible reservations, with payment not needed

The Orchestra welcomes violinist Julia Fischer this season for five concerts as Artist-in-Residence,

After a difficult year, it’s safe to say that they are delighted to be back on stage in Birmingham with a season of symphonic blockbusters. For the CBSO, that means sharing worldclass music with its audiences in one of Europe’s most spectacular venues: Symphony Hall. “As soon as you step inside the hall and hear the orchestra tuning up, you instantly understand why we’ve missed these performances so much” said Gareth Beedie, the Orchestra’s Director of Marketing and Communications , “Every time you walk in, you’re just blown away by the talent and the passion of these performers, and by the incredible atmosphere and acoustics”. The atmosphere truly is unlike any other. Three particularly exciting concerts in the new season take place in early December and include some of the most loved music of all time. Audience favourite John Wilson leads the CBSO in a stunning programme of Rachmaninoff and Gershwin, and Dvořák’s “New World” Symphony is paired with Sibelius’ “Finlandia” for a truly epic evening with the 90strong orchestra. Classic FM’s John Suchet also presents an evening of Britain’s favourite classical music. From Swan Lake and Nimrod to the main theme from Star Wars, this is a definitive countdown of the nation’s best loved pieces, and promises to be an evening of showstopping classics! The 20% discount offer on tickets and the

reduced ticket commission fee, makes a CBSO concert an excellent option for groups. With straight-forward booking options and an easy to acess venue, why not bring your travellers along to experience a world-class orchestra and an evening of musical magic they’ll never forget.

This year, the Royal Philharmonic Orchestra celebrates 75 years at the forefront of music-making in the UK. They welcome groups of just 6+ people to take advantage of a groups package of benefits, including up to 35% off tickets and no payment needed until just two months before the event.

Valentine’s Opera Gala, Best of Broadway and The Music of Bond – to name just a few – across some of the capital’s most spectacular venues such as the Royal Albert Hall, St Paul’s Cathedral, Southbank Centre and Cadogan Hall.

75 years from the Royal Philharmonic Orchestra

Try before you buy: If you’ve not yet brought your group to an RPO concert and think it’s something you’d like to come and try for yourself first, please do not hesitate to get in touch to book your complimentary concert experience.

Carlos Acosta said, “I want to define what it is to be a world-leading classical ballet company in the 21st century.”

A new season awaits Give your group a great night out with the London Philharmonic Orchestra. Groups of 10+ receive a 20% discount plus other benefits. Call our dedicated groups line on 020 7840 4205 or email groups@lpo.org.uk.

ON TOUR THIS AUTUMN BOOK NOW AT ENGLISHTOURINGOPERA.ORG.UK Supported by:

Once considered elitist and not something particularly for the groups market, these days taking a group to the ballet, opera or an orchestral performance, now figures prominently on the radar of group travel organisers. With special group rates, behind the scenes tours and even free tickets for the group’s leader, Hugh Cairns reports on some of those companies keen to welcome you and your group.