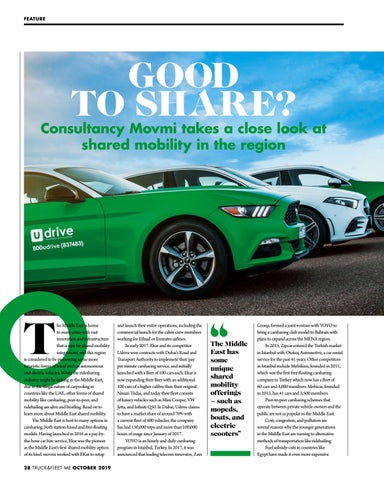 and launch their entire operations, including the commercial launch for the cabin crew members working for Ethiad or Emirates airlines. In early 2017, Ekar and its competitor Udrive won contracts with Dubai’s Road and Transport Authority to implement their pay per minute carsharing service, and initially launched with a fleet of 100 cars each. Ekar is now expanding their fleet with an additional 100 cars of a higher calibre than their original Nissan Tiidas, and today their fleet consists of luxury vehicles such as Mini Cooper, VW Jetta, and Infiniti Q50. In Dubai, Udrive claims to have a market share of around 70% with a current fleet of 400 vehicles; the company has had 150,000 trips and more than 100,000 hours of usage since January of 2017. YOYO is an hourly and daily carsharing program in Istanbul, Turkey. In 2017, it was announced that leading telecom innovator, Zain

The Middle East has some unique shared mobility offerings – such as mopeds, boats, and electric scooters”

Group, formed a joint venture with YOYO to bring a carsharing club model to Bahrain with plans to expand across the MENA region. In 2015, Zipcar entered the Turkish market in Istanbul with Otokoç Automotive, a car rental service for the past 41 years. Other competitors in Istanbul include Mobilizm, founded in 2011, which was the first free-floating carsharing company in Turkey which now has a fleet of 60 cars and 4,000 members. Mobicar, founded in 2013, has 41 cars and 3,500 members. Peer-to-peer carsharing schemes that operate between private vehicle owners and the public are not as popular in the Middle East. Cost, congestion, and pollution are several reasons why the younger generations in the Middle East are turning to alternative methods of transportation like ridehailing. Fuel subsidy-cuts in countries like Egypt have made it even more expensive