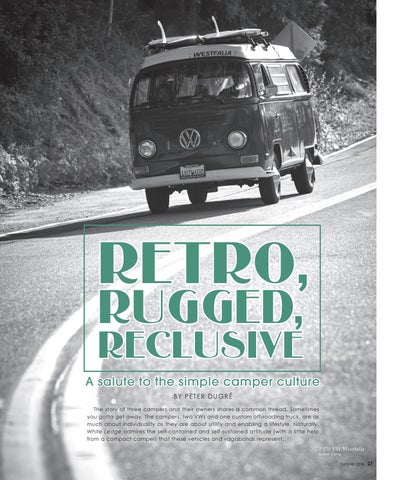 A salute to the simple camper culture BY PE T E R DUGRĂ&#x2030; The story of three campers and their owners shares a common thread. Sometimes you gotta get away. The campers, two VWs and one custom off-roading truck, are as much about individuality as they are about utility and enabling a lifestyle. Naturally, White Ledge admires the self-contained and self-sustained attitude (with a little help from a compact camper) that these vehicles and vagabonds represent. 1970 VW Westfalia

Billy Manzik in his EuroVan in SLO. Manzik photos by Matt Dayka

Music man lives in a van

Billy Manzik lives where he is. Or where his 1995 EuroVan is. The one-manband traveling musician considers his lifestyle far removed from a hamsterwheel existence. Although he counts as a success his personal extraction from the rat race, he’s not going to preach about it. “I don’t want to be one of those guys who’s fake spiritual. I think inevitably with this lifestyle I have become more spiritual. I don’t think I’m worried about the stuff a lot of people are,” Manzik says. You get the feeling he’s used to explaining himself. One spring day, he’s driving north to Novato for a gig and says tersely over the phone, “I’m a professional musician, and I live in my van.” For a while his weekly roaming to shows took him between San Diego and Mount Shasta. “I don’t want to be 28

a slacker. I work fulltime and live with very little. I don’t really mingle with the masses anymore,” he says, a Canadian accent waving its flag. Manzik’s van lifestyle isn’t a hobby or statement. He left his home of northern Calgary, Canada, about six years ago and has made a traveling musician life for himself, which necessitated the van. He was an electrician in Canada but wanted to make music. Originally his dream pointed him to Austin, Texas, but he veered west where he had a connection in California and hasn’t stopped moving since. Road encounters along the way have made ripe raconteur material. There’s the woman Manzik met on the beach in Malibu. She was smoking a joint in the morning. He was commuting from Hollywood, where he records music sometimes. She recommended he park in the hills of Malibu, near Bob Dylan’s place, where nobody, she assured, would bother him or be bothered by him. She

had parked there when she and her husband were in a rough patch. Now it’s his spot when in the area. “I find all these spots all over California. I can practice guitar and there’s nobody around,” he says. The trees hang above, or sometimes the streetlights at the edge of suburbia, a couple of oil stains in the road. Manzik has played shows at posh Montecito residences, the types of places with guest houses the size of regular houses. Offered such a crash pad for the night, he opted for the EuroVan. “I’ve got the bed dialed in,” he says. “The thing is, I’m on a mission. I’m playing music. I’m making people dance. I’m making them forget about their problems for a while. That’s why it’s worth it, what I’m doing.”

Paul Belmont needed a rugged ride to reach destinations inaccessible to casual campers. He found a FWC Hawk camper shell to top his Ford F250, knowing the sturdy shell would be durable enough to make it over the mountain and an extra 5 miles to guarantee ambient noises included nothing but a whispering wind and the crackle of fire. “Camping isn’t next to an RV with a generator running. Camping is off-road in the backcountry; you want to get away from people,” he says. A mountain biker, Belmont had taken his truck, pre-upgraded Hawk shell, to Zion for a 10-day adventure during which he slept under the standard truck cap in a sleeping bag. It was the trip of of lifetime, but to replicate it repeatedly, he’d need to upgrade to a camper shell. “I realized I needed a little more,” Belmont says. He started with a Skamper before landing the used 1990 FWC Hawk. “The aluminum frame makes it robust structurally,” says Belmont, a structural engineer by trade, so he’s not bluffing with the “robust structurally” statement. Belmont put more than TLC into the Hawk. The Santa Barbara resident gave the project precious baby love and documented every move at his blog (23 page scrolls of it) www.expeditionportal. com/forum/threads/80314-SLO-s-FWCHawk-Refurb-Build. The ride came from an original owner who had used

Carissa and Paul Belmont use their 4x4 and FWC Hawk as a launch pad for backcountry mountain bike adventures. Belmont photos by Joshua Curry

it to its fullest for 20 years. “I got rid of everything but the heater,” he says. The 33-year-old tinkerer and professional maker of structures rewired the entire operation, installed a solar panel for the refrigerator and a fuse panel for the lights. Add in the new cabinetry and linoleum flooring, and he’s got some blood, sweat and beers into this ride. Most importantly, the camper survives all terrains. It’s been on a number of mountain bike trips to Zion. It has survived the Eastern Sierras, Mammoth, Bishop and Lone Pine. The height of its enjoyment came at 9,600 feet in altitude at Leavitt Lake. Then there came the honeymoon. Paul married Carissa (sorry Hawk) and they spent three weeks cruising the coast up to Bend, Ore. Big Sur got some love on the way along with numerous other stops. Belmont’s mission to build a camper shell that stays intact on journeys to places few people rest their heads and awaken to dewy and distant landscapes is a destination he has reached, thanks to the Hawk.

Mikey and Alma Billgren in their 1970 VW Westfalia. Billgren photos by Joshua Curry

Mikey Billgren’s acquisition of his 1970 Volkswagen Westfalia is a story of true love. A VW van was his high school sweetheart. “I couldn’t get over getting rid of it,” he says of the lost VW he had driven when he was 16. A decade plus after his first, a new one came into his life. “A buddy in Ojai needed money for his wedding, so he sold it to me,” Billgren says. The VW transfer became the honeymoon vehicle for Billgren, who married Alma Vences, and together they lurched into the sunset in the dark moss green van on a honeymoon to camp spots all around San Diego. The van is also a labor of love that requires constant nurturing. When White Ledge contacted Billgren, it needed a clutch. Nine bolts and a Saturday did the trick. “It’s a breeze,” Billgren says. “It only takes a couple of jack stands and some parts.” The keeper of a 46-year-old vehicle learns that parts are crucial. On this oldie, which Billgren used as a daily driver for years, the mileage is uncertain because the speedometer and odometer didn’t work for about six years. Speeding wasn’t an issue. “It takes forever to get 30

anywhere,” Billgren says. He estimates 0-to-60 mph in about 5 minutes—if you reach 60. Despite the stereotypical downside to classic camper vans—mainly they’re snails that routinely visit the shoulder in a sputter—Billgren remains firm in his ability to overlook any shortcomings. “It’s a perfect daytripper,” he says. “We take it down Highway 1 (from Carpinteria), grab a couple of boards, the dogs.” It’s either the beach or the hills, and wherever the van is, an instant living room and chill spot awaits. Attach the bikes to the back of the VW and have the cooler inside. Place the beers on ice and climb the trail (in this case it’s

Romero Canyon). Once you bomb down the mountain, the van will be there, the beers will be cold, ready to maximize the mountain vibe. Billgren, a Carpinterian, has also cruised it to points as far as Tahoe. “I piled in my snowboards. We made it back,” he says. One epic breakdown Billgren recalls also revolved around nuptials. Cruising to a surfer-friend’s wedding, down a long hill near Jalama, he gassed but the green machine wasn’t firing. Nothing. So he pulled over. Billgren discovered that he had to replace the points on the distributor at the roadside. He had the tools and parts on board to have her up and running again in no time. |