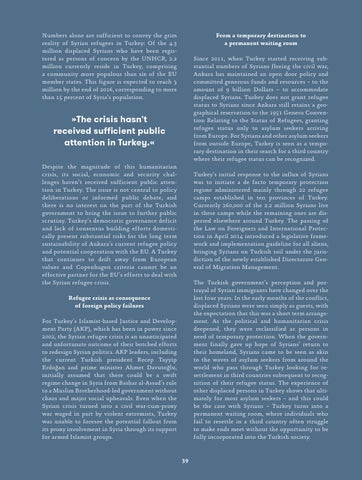 From a temporary destination to a permanent waiting room

Numbers alone are sufficient to convey the grim reality of Syrian refugees in Turkey: Of the 4.3 million displaced Syrians who have been registered as persons of concern by the UNHCR, 2.2 million currently reside in Turkey, comprising a community more populous than six of the EU member states. This figure is expected to reach 3 million by the end of 2016, corresponding to more than 15 percent of Syria’s population.

Since 2011, when Turkey started receiving substantial numbers of Syrians fleeing the civil war, Ankara has maintained an open door policy and committed generous funds and resources – to the amount of 9 billion Dollars – to accommodate displaced Syrians. Turkey does not grant refugee status to Syrians since Ankara still retains a geographical reservation to the 1951 Geneva Convention Relating to the Status of Refugees, granting refugee status only to asylum seekers arriving from Europe. For Syrians and other asylum seekers from outside Europe, Turkey is seen as a temporary destination in their search for a third country where their refugee status can be recognized.

»The crisis hasn&#39;t received sufficient public attention in Turkey.« Despite the magnitude of this humanitarian crisis, its social, economic and security challenges haven’t received sufficient public attention in Turkey. The issue is not central to policy deliberations or informed public debate, and there is no interest on the part of the Turkish government to bring the issue to further public scrutiny. Turkey’s democratic governance deficit and lack of consensus building efforts domestically present substantial risks for the long term sustainability of Ankara’s current refugee policy and potential cooperation with the EU. A Turkey that continues to drift away from European values and Copenhagen criteria cannot be an effective partner for the EU’s efforts to deal with the Syrian refugee crisis.

Turkey’s initial response to the influx of Syrians was to initiate a de facto temporary protection regime administered mainly through 22 refugee camps established in ten provinces of Turkey. Currently 260,000 of the 2.2 million Syrians live in these camps while the remaining ones are dispersed elsewhere around Turkey. The passing of the Law on Foreigners and International Protection in April 2014 introduced a legislative framework and implementation guideline for all aliens, bringing Syrians on Turkish soil under the jurisdiction of the newly established Directorate General of Migration Management. The Turkish government’s perception and portrayal of Syrian immigrants have changed over the last four years. In the early months of the conflict, displaced Syrians were seen simply as guests, with the expectation that this was a short term arrangement. As the political and humanitarian crisis deepened, they were reclassified as persons in need of temporary protection. When the govern­ ment finally gave up hope of Syrians’ return to their homeland, Syrians came to be seen as akin to the waves of asylum seekers from around the world who pass through Turkey looking for re­­ settlement in third countries subsequent to recog­ nition of their refugee status. The experience of other displaced persons in Turkey shows that ultimately for most asylum seekers – and this could be the case with Syrians – Turkey turns into a permanent waiting room, where individuals who fail to resettle in a third country often struggle to make ends meet without the opportunity to be fully incorporated into the Turkish society.

Refugee crisis as consequence of foreign policy failures For Turkey’s Islamist-based Justice and Development Party (AKP), which has been in power since 2002, the Syrian refugee crisis is an unanti­cipated and unfortunate outcome of their botched efforts to redesign Syrian politics. AKP leaders, including the current Turkish president Recep Tayyip Erdoğan and prime minister Ahmet Davutoğlu, initially assumed that there could be a swift regime change in Syria from Bashar al-Assad’s rule to a Muslim Brotherhood-led government without chaos and major social upheavals. Even when the Syrian crisis turned into a civil war-cum-proxy war waged in part by violent extremists, Turkey was unable to foresee the potential fallout from its proxy involvement in Syria through its support for armed Islamist groups. 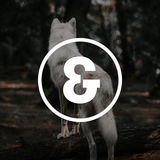