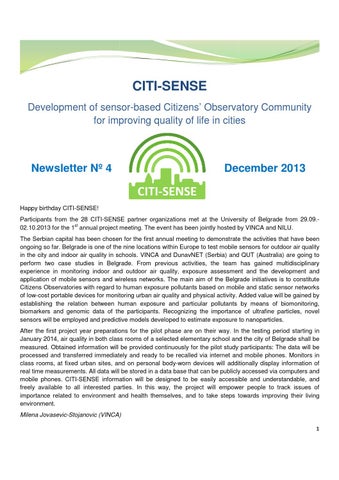 Happy birthday CITI-SENSE! Participants from the 28 CITI-SENSE SENSE partner tner organizations met at the University of Belgrade from 29.09. 29.09.02.10.2013 for the 1st annual project meeting. The event has been jointly hosted by VINCA and NILU. The Serbian capital has been chosen for the first annual meeting to demonstrate the activities that have been ongoing so far. Belgrade is one of the nine locations within Europe to test mobile sensors for outdoor air quality in the city and indoor air quality in schools. VINCA and DunavNET (Serbia) and QUT (Australia) are going to perform two case studies in Belgrade. From previous activities, the team has gained multidisciplinary experience in monitoring indoor and outdoor air quality, exposure assessment and the development and application of mobile sensors and wireless networks. The main n aim of the Belgrade initiatives is to constitute Citizens Observatories with regard to human exposure pollutants based on mobile and static sensor networks of low-cost portable devices for monitoring urban air quality and physical activity. Added value will be gained by establishing the relation between human exposure and particular pollutants by means of biomonitoring, biomarkers and genomic data of the participants. Recognizing the importance nce of ultrafine particles, novel sensors will be employed and predictive models developed to estimate exposure to nanoparticles. After the first project year preparations reparations for the pilot phase are on their way. In the testing period starting in January 2014, air quality in both class rooms of a selected elementary school and the city of Belgrade shall be measured. Obtained information will be provided continuously for the pilot study participants: The data will be processed and transferred immediately and ready to be recalled via internet and mobile phones. Monitors in class rooms, at fixed urban sites,, and on personal body-worn body devices will additionally display information of real time measurements. All data will be stored in a data base that can be publicly accessed via computers and mobile phones. CITI-SENSE SENSE information will be designed to be easily accessible and understandable, and freely available to all interested parties. In this way, the project will empower people to track issues of importance related to environment and health themselves, and to take steps towards improving their living environment. Milena Jovasevic-Stojanovic Stojanovic (VINCA) 1

Barcelona: lights, bicycles, camera, action! (Tom Cole-Hunter, CREAL)) CITI-SENSE SENSE was selected as one of three projects to be filmed by the European Service Network with the aim to put forward the he principle/concept of Citizen Observatories (CO) projects (as as a general approach) together with a few examples of CO application (currently pilot studies) of the projects financed by the European Commission under the 7th Framework Package (FP7). The commissioning of the film is by the DirectorateDirectorate General of Research &amp; Innovation (DG RTD), intended as a general short film of several minutes explaining to a broad public what CO could be and why this way of working could involve more citizens with newly adapted technology. As showcased in the film, citizens (being the elements of the CO) will not only be helping to collect data, but also they will receive a beneficial product or service resulting from the collected data. data An example of such a product or service proposed, coming from the CITI-SENSE CITI project, is a real-time time urban air pollution map that could indicate alternative travel routes for active commuters. A tool of this nature may help cyclists or joggers to avoid heavily-polluted zones while performing physical activity for utility or exercise, similar to the way that existing online maps may help commuters to choose the most direct route – another choice would be the most clean/green route. As well as shots of beautiful Barcelona being traversed with COs, the sensor technology development and testing behind the COs was showcased in the th ATEKNEA (formerly CRIC) laboratories also in Barcelona. The other two projects included in the video alongside CITI-SENSE CITI SENSE were Omniscientis (of CO rural odour monitoring in Belgium) and Citclops (of CO marine water monitoring in Ireland). The DG RTD will wil officially premiere the “Citizen Observatories” video during the GEO Ministerial Summit that will take place mid-January mid 2014 in Geneva.

CITI-SENSE SENSE volunteer with the pilot mobile sensor node attached to his chest, being filmed bicycling in Barcelona, September 2013.

Integrating a wireless distributed sensor network for air pollution and exposures estimation with a citizen social network (David Broday – Technion) Due to Israel’s vulnerability to climate changes, increased urbanization, fast fast population growth, constantly improving lifestyle, and unique geo-meteorological meteorological conditions (edge of the desert, semi-arid, semi high insulation, high summer midday temperature, etc.), the Israeli public faces deteriorating urban air quality, reduced visibility, ty, increasing frequency of photochemical smog episodes, increased exposure to fine and ultrafine airborne particulate matter (PM), mild urban heat islands, reduced precipitation (and wet deposition), food grown with reclaimed water as a result of fresh water water shortage (and resuspended dust from such fields), enhanced desertification, and severe predictions of climate change indicators. All these conditions contribute, and oftentimes synergistically exacerbate, environment environment-health health relationships. Moreover, on top of these dynamic conditions the close proximity between people (the receptors) and pollutant sources gives rise to rather unique Israeli circumstances where people are routinely exposed to pollutant mixtures containing anthropogenic and biogenic, fresh and aged, organic and inorganic, urban and rural/agricultural, and toxic and harmless respirable pollutants. In particular, common ambient PM levels in Israel are much higher than those observed in Europe and North America. As part of the CITI-SENSE project, ct, the Technion team study exposure to traffic-related traffic related airborne stressors, and develop technologies and concepts that enable citizen participation in (a) air pollution (AP) research prioritization and design, (b) collection and analysis of AP data (e.g. b byy utilizing distributed computer resources), and (c) dissemination, adaption of personal choices and priorities for AP reduction, and building pro-active active social networks that supports policy changes. Specifically, we study ways to turn the concept of wireless ess distributed sensor networks (WDSN) for AP monitoring into a viable citizen observatory framework; methods to handle, analyze, search and share Big Monitoring Data; tools for publishing apprehensible products (e.g. exposure maps, personal exposure tracking); tracking); and algorithms for field “on-the-go” “on calibration, error correction, and pooled inference. The Technion will be involved in integrating these components and address them within a comprehensive yet flexible multi multi-scale inter-connected connected phenomena and processes. pro The sensor board holds several sensors for gaseous pollutants as well as other sensors for measuring different environmental parameters, such as temperature, relative humidity, location, acceleration, etc. The data are gathered by several wireless end-member member nodes and can be shared, locally processed and transmitted to a central server for further pooled data analysis and interpretation. Research activities will focus on exposure to urban air pollution using a citizen infrastructure platform, and include: clude: a dialogue with the public to engage citizens to be active participants, dissemination of results and related information to the general public and to policy makers, enabling informed public discussion, empower citizens and encourage public participation participation in reducing their individual exposures (e.g. by changing individual/communal preferences; societal priorities regarding development, urbanization, and transportation means; emission reduction at home, from home, at work, during commute; etc. To date, calibration of different sensors of the wireless distributed sensor network and comparison against data from a standard air quality monitoring (AQM) station have been performed. Preliminary field campaigns include studying small-scale scale spatial variations in in pollutant concentrations using both stationary and mobile sensing units. We expect to deploy a convenient network of about 10 units in a central urban region towards the end of 2013. This field campaign will run for a few months, include several sub task tasks, s, and will serve as the first phase of a much larger field campaign planned to take place in 2014 2014-2015. 3