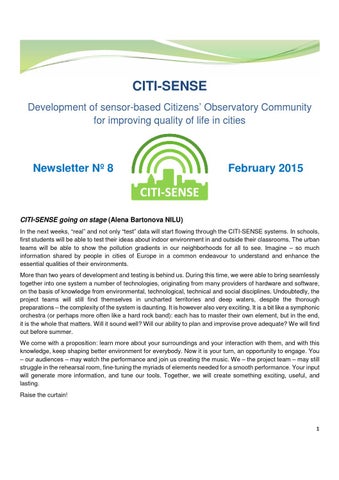 CITI-SENSE going on stage (Alena Bartonova NILU) In the next weeks, “real” and not only “test” data will start flowing through the CITI-SENSE systems. In schools, first students will be able to test their ideas about indoor environment in and outside their classrooms. The urban teams will be able to show the pollution gradients in our neighborhoods for all to see. Imagine – so much information shared by people in cities of Europe in a common endeavour to understand and enhance the essential qualities of their environments. More than two years of development and testing is behind us. During this time, we were able to bring seamlessly together into one system a number of technologies, originating from many providers of hardware and software, on the basis of knowledge from environmental, technological, technical and social disciplines. Undoubtedly, the project teams will still find themselves in uncharted territories and deep waters, despite the thorough preparations – the complexity of the system is daunting. It is however also very exciting. It is a bit like a symphonic orchestra (or perhaps more often like a hard rock band): each has to master their own element, but in the end, it is the whole that matters. Will it sound well? Will our ability to plan and improvise prove adequate? We will find out before summer. We come with a proposition: learn more about your surroundings and your interaction with them, and with this knowledge, keep shaping better environment for everybody. Now it is your turn, an opportunity to engage. You – our audiences – may watch the performance and join us creating the music. We – the project team – may still struggle in the rehearsal room, fine-tuning the myriads of elements needed for a smooth performance. Your input will generate more information, and tune our tools. Together, we will create something exciting, useful, and lasting. Raise the curtain!

The conference &quot;Citizens’ Observatories: Empowering European Society&quot;, organized on 4th December 2014 in Brussels, had the objective to raise awareness about the Citizens’ Observatories concept and present first outcomes of the five projects after the first two years of work. The event, with more than 200 attendees, provided opportunities to engage with experts and practitioners working across a range of European citizen science initiatives and policy making bodies. Two round tables were addressing the concept of Citizens’ Observatories from a strategic as well as from a technical point of view. A high-level round table took place with different national and international stakeholders. The panelists discussed issues such as the validity of the Citizens&#39; Observatories concept for environmental policy making, its added value and eventual drawbacks, the maturity of these initiatives and their sustainability. A second round table included representatives from the citizens&#39; observatories projects and experts in Citizen Science who explored the technical and social challenges of these activities. The sustainability of citizen engagement over time, the ownership of the data collected by citizens or data preservation was some of the questions that were discussed. In order to demonstrate more from the projects, a small exhibition was setup on the lobby of the venue, where the five projects presented posters and gave demonstrations during the breaks. CITI-SENSE had the opportunity to demonstrate the interplay between sensors and mobile phones in different case studies with the participation of several partners (NILU, ATEKNEA, TECNALIA, DNET, JSI, SINTEF, U-Hopper, S&amp;C). The mobile sensors took measurements and sent the data to the CITI-SENSE server. Both, the CITI-SENSE web portals and mobile application can access the data from the server. The web portals were displaying data from static sensors while the mobile application was providing information about personal data from the mobile sensors or mobile connected sensors. The use of mobile applications provides a good basis for more citizen engagement by offering functionalities for feedback and personal perception of the surrounding environment. 2

Internal training on empowerment and participation After the successful internal workshop on participation and empowerment last autumn in Barcelona, we had to bring the planning of the empowerment initiatives (EIs) one step further. Before the beginning of the main project phase, that will start in spring, the liaison between the experts on empowerment and participation (WP5) and the people in charge of the EIs (Location Officers â&amp;#x20AC;&amp;#x201C; LOs) had to become stronger. Thus, we arranged a meeting in Oslo for both WP5 partners and the LOs. The main aim was to look at the preparations of the EI from an empowerment/participation perspective and define areas that need further input from WP5. This small scale meeting provided an excellent platform for the LOs to meet face-to-face with their contact persons from WP5 and discuss empowerment related issues in their EI. The discussions were not only limited to questions relating to one specific location, but they included also topics to discuss in small groups that were affecting several locations. One of the topics was communication: How do we communicate internally, across WPs? How do we communicate with citizens and other stakeholders? Governance was another point on the agenda.

Another topic that has been discussed was evaluation. Evaluation has to accompany the whole empowerment process. Thus, a plan for the implementation has to be in place with clear aims so that we can measure if these aims were met and how efficient the whole process was. Since this project is very much a learning project, we will evaluate at the end also what we have learnt, but also the citizens and other stakeholders. Special attention will be given to participatory evaluation approaches and how they can implemented in each location. Although we had a fruitful time, we have to continue strengthening the liaison between the locations and WP5 through regular telecons and personal contact. The full consortium meeting in March will provide another opportunity for personal contact, to exchange and bring the planning of the EI with regard to participation and empowerment to the next level with the aim to equip the LOs in the best possible way for the full implementation phase.

Issue #8 of the CITI-SENSE project newsletter