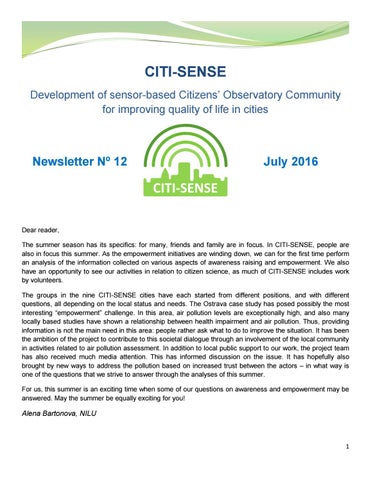 Dear reader, The summer season has its specifics: for many, friends and family are in focus. In CITI-SENSE, people are also in focus this summer. As the empowerment initiatives are winding down, we can for the first time perform an analysis of the information collected on various aspects of awareness raising and empowerment. We also have an opportunity to see our activities in relation to citizen science, as much of CITI-SENSE includes work by volunteers. The groups in the nine CITI-SENSE cities have each started from different positions, and with different questions, all depending on the local status and needs. The Ostrava case study has posed possibly the most interesting “empowerment” challenge. In this area, air pollution levels are exceptionally high, and also many locally based studies have shown a relationship between health impairment and air pollution. Thus, providing information is not the main need in this area: people rather ask what to do to improve the situation. It has been the ambition of the project to contribute to this societal dialogue through an involvement of the local community in activities related to air pollution assessment. In addition to local public support to our work, the project team has also received much media attention. This has informed discussion on the issue. It has hopefully also brought by new ways to address the pollution based on increased trust between the actors – in what way is one of the questions that we strive to answer through the analyses of this summer. For us, this summer is an exciting time when some of our questions on awareness and empowerment may be answered. May the summer be equally exciting for you!

Citizensâ&amp;#x20AC;&amp;#x2122; Observatories and biomonitoring campaign in Ostrava Ostrava/Silesia is one of the most air polluted areas in the Czech Republic due to its density of heavy industry. Over the last decades, high concentrations of PM2.5 (particles smaller than 2.5 Âľm) and B[a]P (benzo[a]pyrene), both proven human carcinogens, have been measured in air continuously, exceeding the limits for human health protection. The CITI-SENSE Empowerment Initiative (EI) in Ostrava aimed to answer some of the citizen concerns. We have been carrying out air quality measurements between winter 2013 and winter 2016. Usually in winter time, air pollution in this location reaches high concentrations well above the limit values. The measured concentrations during the period of the Ostrava EI exceeded the limits for health protection 25 Âľg/m3 PM2.5 and 1 ng/m3 B[a]P several fold. Part of the EI was also a biomonitoring campaign. Volunteers have kept a timelocation-activity diary and answered a questionnaire about their life style and an air quality perception questionnaire. They also could try out the ATEKNEA personal sensor (LEO) and use the mobile application CityAir. The CITI-SENSE static sensors and the compliance air quality monitoring network were providing background data about PM2.5, B[a]P and NOx. Citizens and NGOs had also a chance to cooperate closely with scientists and ask questions about air quality. The biomonitoring campaign has been accompanied by an awareness raising initiative. In the air quality perception questionnaire, 94% of the volunteers described the air quality in their city as bad, associated with frequent inversion episodes, smog, breathing problems, bad smell, dust, smoke, dirt, industry with a terrible smoke, and home heating. Asthma was mentioned as a predominant health problem. The residents underlined their feeling of having a reduced life quality as the air pollution limits their outdoor activities. 96% of the respondents said that air pollution affects their health. Young people give air pollution as a reason for leaving the region. Cooperation with the city authorities unveiled a demand for raising children&#39;s awareness on air pollution. Subsequently, educational programs about air, air pollution and its prevention have been carried out in kindergartens and primary schools with great success. At the end of all EI activities, a public seminar was organized in Ostrava for all stakeholders presenting the project results and enabling a great discussion about air pollution problems in the region and potential solutions.

CITI-SENSE at the Citizen Science Conference The CITI-SENSE project was represented in several sessions of the First International Citizen Science Conference organised by the European Citizen Science Association (ECSA). The conference started on 19th and finished on the 21st of May 2016 and it was held on the premises of the Museum fĂźr Naturkunde and Kulturbrauerei in Berlin. The museum and the rooms of the old brewery were an exciting venue for the participants from all over Europe. The three-day event showcased how both traditional and new ways of citizens working with scientists can enable the transformative enhancement of science-policy and social impact, scientific advancement, scientific literacy and empowerment. Of particular importance was the role of citizen science within wider agendas, such as open science and innovation, and progressing towards responsible research and innovations. CITI-SENSE partners participated in five out of the thirteen sessions and lead discussions on issues about air quality and cooperation between scientists and citizens. They had the opportunity to present most of the CITI-SENSE novel technologies in oral presentations and posters and also to demonstrate some of them in the exhibition area. Key challenges, lessons learned and prominent results were discussed thoroughly during the sessions and in breaks with many interested scientists and key players in the arena of citizensâ&amp;#x20AC;&amp;#x2122; science.