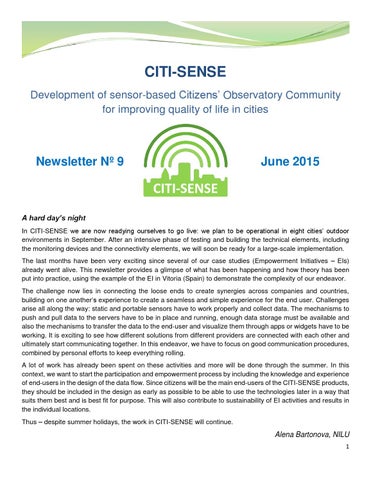 A hard day’s night In CITI-SENSE we are now readying ourselves to go live: we plan to be operational in eight cities’ outdoor environments in September. After an intensive phase of testing and building the technical elements, including the monitoring devices and the connectivity elements, we will soon be ready for a large-scale implementation. The last months have been very exciting since several of our case studies (Empowerment Initiatives – EIs) already went alive. This newsletter provides a glimpse of what has been happening and how theory has been put into practice, using the example of the EI in Vitoria (Spain) to demonstrate the complexity of our endeavor. The challenge now lies in connecting the loose ends to create synergies across companies and countries, building on one another’s experience to create a seamless and simple experience for the end user. Challenges arise all along the way: static and portable sensors have to work properly and collect data. The mechanisms to push and pull data to the servers have to be in place and running, enough data storage must be available and also the mechanisms to transfer the data to the end-user and visualize them through apps or widgets have to be working. It is exciting to see how different solutions from different providers are connected with each other and ultimately start communicating together. In this endeavor, we have to focus on good communication procedures, combined by personal efforts to keep everything rolling. A lot of work has already been spent on these activities and more will be done through the summer. In this context, we want to start the participation and empowerment process by including the knowledge and experience of end-users in the design of the data flow. Since citizens will be the main end-users of the CITI-SENSE products, they should be included in the design as early as possible to be able to use the technologies later in a way that suits them best and is best fit for purpose. This will also contribute to sustainability of EI activities and results in the individual locations. Thus – despite summer holidays, the work in CITI-SENSE will continue.

Outdoor comfort in Vitoria-Gasteiz In the CITI-SENSE project, the Empowerment Initiative (EI) in Vitoria, Spain deals with environmental quality and personal comfort in public spaces. First observations have been made over a two-weeks period in April. We selected 4 different public spaces in the city in cooperation with the CEA (Center for Environmental Studies), following criteria on diversity of space types. For each selected area, we have defined several observation points so that we can get more reliable results by evaluating a larger area of each zone. To recruit our volunteers, we made a list of organizations in the city, based on geographical plurality criteria and the potential interest of those entities in environmental and urban environment matters. We selected a total of 49 entities that were invited to the project presentation meetings. As a result, we obtained a group of more than 40 volunteers to participate. In addition, a secondary school in the city with a small group of students of &quot;environmental instructor&quot; grade has been contacted. This center has actively participated in the project with a group of 9 instructors. Each volunteer received a kit, consisting of a portable sensor and a smartphone to measure acoustic and thermal comfort. In additon, a comprehensive questionnaire was developed to collect information about subjective perception of thermal comfort, acoustic comfort, landscape perception and other variables to provide more accurate comfort data according to each observerâ&amp;#x20AC;&amp;#x2122;s profile. At the end of these two weeks, more than 200 observations of 9 points have been made. In order to visualize the obtained data in the best way and to make them more understandable and easier to use by all citizens, a group of volunteers has been participating in a workshop about co-design of displaying the observations. One of the objectives of the EI seeks to increase the social impact of the project to expand the user community. To reach a wider audience, we have used several tools such as facebook pages, a questionnaire, a brochure for dissemination and recruitment, a website, a press event, and workshops for the volunteers. During the two weeks, we worked with all volunteers, both in groups and individually. While recording observations in the city, we could also engage people that were not involved, contributing with their personal observations. The results of the EI will be analyzed and quantified in the coming weeks so that â&amp;#x20AC;&amp;#x201C; at the end of the project â&amp;#x20AC;&amp;#x201C; we can provide an index of social impact based on an indicator that has been developed for this purpose. We are currently evaluating the EI, which includes an ongoing dialogue with some participants. Thus, it is too early to come with any final conclusions. However, there are some points to improve and some interesting data for other EIs regarding recruitment, communication and use of communication tools, proceeding of observations and technical issues. 2

Engagement of high school students from North to South The recent months have been filled with a number of engagement activities involving schools. Here, we will report about two events: One in Oslo, Norway and one in Haifa, Israel. On 09 April, a students’ conference has been held for the 3 secondary schools that have been participating in the Oslo schools Empowerment Initiative. The students prepared posters, presenting the results of their research projects on indoor air quality. The conference was a full day event with talks and awards for the best posters, judged by experts from the labour inspection authority, SINTEF and NILU. Much had been learned in terms of indoor air quality: 2 of the schools reported good air quality with good ventilation systems and they also learned whom of the students and employees are most affected by poorer air quality, e.g., kitchen staff. It seemed that the students’ awareness has been raised in terms of observing and recognizing the main problems with air quality in their personal environment. The other event has taken place on 05 May, at a regional research-fair in Haifa. The fair took place at the National Science Museum in Haifa, presenting 93 works of students. They included two research works carried out as part of the CITI-SENSE collaboration with schools in the district and the “Youth to adulthood” team. The first work by “Israelia” school students, examined the difference in air quality between a classroom and the teachers room in the school while the second work, by students in “Tel Chai” school, examined differences in air quality between the schoolyard and classroom. In both cases, the students found that the air quality in the classroom was better than the air quality in the compared location. With great confidence, the students presented the rational for the research, their hypothesis, methods, findings and conclusions and left a strong and positive impression all around. The grand finale was the announcement at the end of the day that the group of students from “Tel-Chai” school has won a certificate of excellence for their work on this relevant and important topic.

Issue #9 of the CITI-SENSE project newsletter