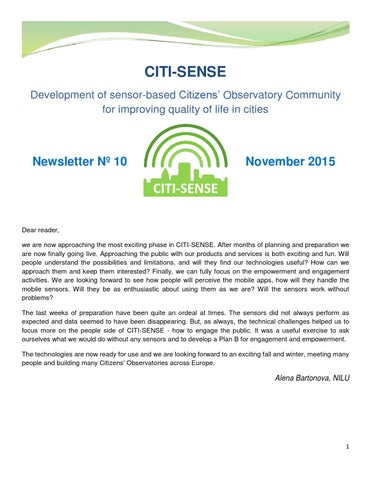 Dear reader, we are now approaching the most exciting phase in CITI-SENSE. After months of planning and preparation we are now finally going live. Approaching the public with our products and services is both exciting and fun. Will people understand the possibilities and limitations, and will they find our technologies useful? How can we approach them and keep them interested? Finally, we can fully focus on the empowerment and engagement activities. We are looking forward to see how people will perceive the mobile apps, how will they handle the mobile sensors. Will they be as enthusiastic about using them as we are? Will the sensors work without problems? The last weeks of preparation have been quite an ordeal at times. The sensors did not always perform as expected and data seemed to have been disappearing. But, as always, the technical challenges helped us to focus more on the people side of CITI-SENSE - how to engage the public. It was a useful exercise to ask ourselves what we would do without any sensors and to develop a Plan B for engagement and empowerment. The technologies are now ready for use and we are looking forward to an exciting fall and winter, meeting many people and building many Citizens&#39; Observatories across Europe.

Technologies for everyone After a summer filled with many activities of diligent work, the Citizens’ Observatories (COs) for outdoor air quality have finally been launched in September. In the last newsletter, we reported about the COs for personal comfort in public spaces and the ones for indoor air quality in schools. Now, it is time to look at the remaining COs for outdoor air quality in Barcelona, Belgrade, Edinburgh, Haifa, Ljubljana, Oslo, Ostrava and Vienna. We have been working along the chain “sensors-platform-products-users”. After the calibration and testing of static and portable sensors, focus was now laid on both, data flow, storage and the finalization of information products and services. In terms of products and services, we can now present a range of technical solutions that will help to engage with and empower citizens regarding air quality in their direct environment: We developed the CityAir mobile application for both Android and iOS systems to report real-time personal perception of air quality. Several additional apps and widgets for visualizing sensor data are also under preparation, including pollution maps making use of data fusion techniques. CITI-SENSE products so far available (clockwise from right to left): static and portable sensor and sensor platforms; CITI-SENSE Citizens’ Observatories central web portal; CITISENSE Citizens’ Observatory location-based web portal (one example from Oslo); static and mobile sensor’s fusion techniques reflected in one example of the street-level concentration map of NO2 (in µg/m3) in Oslo; CityAir perception mobile application.

CITI-SENSE products and services are currently tested by volunteers in the different locations across Europe. In order to itensify communication between scientists and citizens, they are asked to provide feedback on the products for better and improved services. One way to do so is through the Citizens’ Observatories Central Web portal (http://co.citi-sense.eu). This web site offers a collection of resources to support citizen engagement in environmental decision making via the unique Citziens’ Observatories Toolbox (COT). In addition, it is offering access to the web portals of the individual Citizens’ Observatories of the CITI-SENSE project. 2

On Safari in Barcelona The past few months in Barcelona have been quite exciting in terms of public engagement activities. Now that we have ‘technologies for everyone’ ready to be publically-launched, more effort is being made to actively engage not just potential participants of the Little Earth Observatories (LEOs), nor also only users of the CityAir mobile app, but anyone that could benefit from the Citizens’ Observatories Toolbox. These efforts have been helped by the occurrence of different European-level citizen science initiatives hosted in Barcelona and participated in by Barcelona’s CITISENSE (CREAL) team. One of the most recent events was the General Assembly of the European Citizen Science Association (ECSA). CITI-SENSE offered a ‘Safari’ in which six participants hosted a LEO and a smartphone with associated applications for transmitting LEO data, alongside GPS and MET, to the Ateknea server. This data was then available to be shown to the hosts and other attendees, showing the path taken through two transport modes (being the metro and a tram), multiple microenvironments (including a park, the beach, and busy roads). The popularity of the LEO was evident in some people, with one host even almost begging to take the LEO home overnight and another wanting to bring one with them to a meeting with schoolchildren in Switzerland! This enthusiasm was palpable, and so expressed by us in the #myCSwish ‘selfie’ requested to be made by attendees from the event organizers: the #myCSwish of @CitObsBCN (pictured together above) is that all citizens are as enthusiastic about citizen science as the attendees of ECSA Barcelona! Another major engagement activity was collaboration with the Institute of Photonic Sciences (ICFO) who are partners of the iSPEX-EU project. CREAL, identified by ICFO as now prominent in local citizen science activities, was approached to assist in the recruitment of citizens to download an app and use an ‘add-on’ (technically a photo-spectrometer) with their smartphone to make an objective observation of the atmospheric air. We agreed to help with the expectation that we could promote the CityAir app as a compliment to iSPEX-EU. Although the idea is simple and the method fun, several challenges were presented for the recruitment of participants. The first main challenge was that the associated iSPEX-EU smartphone application and add-on were only compatible with iPhone 4/4s/5/5s, and at the time CityAir only for Android. The second was that roaming internet connection was needed for the engaged participants to download the apps. These challenges meant that we were not able to recruit as many participants as we had hoped, and from this we learn that more inter-compatible products should be considered and developed if possible to allow the maximum participation potential of citizens. Partly this is addressed with CityAir now also available for use on iPhones. Nevertheless, through exercises like this, we are continuously learning and improving our products and services for engagement and empowerment of citizens. Upcoming engagement activities include presentations at the City Health International conference in Barcelona in November and various other public participant-driven events, such as patient groups for using the LEO and CityAir in combination. 3