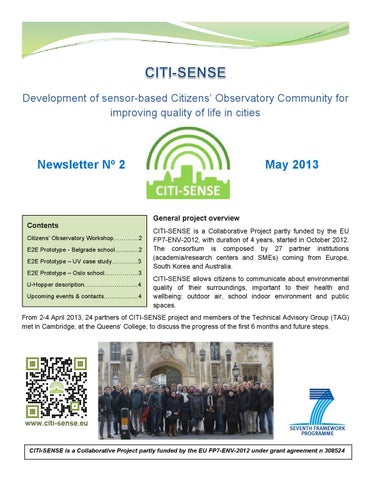 General project overview CITI-SENSE is a Collaborative Project partly funded by the EU FP7-ENV-2012, with duration of 4 years, started in October 2012. The consortium is composed by 27 partner institutions (academia/research centers and SMEs) coming from Europe, South Korea and Australia. CITI-SENSE allows citizens to communicate about environmental quality of their surroundings, important to their health and wellbeing: outdoor air, school indoor environment and public spaces.

From 2-4 April 2013, 24 partners of CITI-SENSE project and members of the Technical Advisory Group (TAG) met in Cambridge, at the Queens’ College, to discuss the progress of the first 6 months and future steps.

E2E Prototype – Belgrade school (by Hai-Ying Liu, NILU &amp; Boris Pokric, DNET) The aim of the &quot;end-to-end&quot; pilots’ implementation prototype is to enable the consortium to prepare for the pilot cases development in the 9 cities (Barcelona, Belgrade, Edinburgh, Haifa, Ljubljana, Oslo, Ostrava, Vienna and Vitoria). This will be done through a pre-prototype development based on already existing elements of the sensor-platform-product-user chain, for a limited number of cases considered mature at this stage. These prototypes will be used to demonstrate the CITI-SENSE whole information chain in three pilot cases, two on indoor school environment in Belgrade and Oslo, and one on UV forecast. For the Belgrade indoor case study, it was selected a school having an automated air quality station in the vicinity (about 300m) used by the city authority. Initially, one device based on EkoBus 700 technology is placed in a classroom and data on CO, CO2, NO2, Temperature, air pressure and humidity will be collected. All the information will be elaborated by the EkoBus 700 associated server, resource directory and application.

E2E Prototype – Oslo school (by Britt Ann K. Høiskar, NAAF &amp; Andrei Tamilin, U-hopper) For the Oslo indoor case study, the Horten High School has been selected as pilot. The school is composed by two buildings with about 1000 pupils, 15-19 years old. The first step will be to establish good dialogue with local school authorities, county real estate manager, headmaster, teaching staff, technical staff, health &amp; safety representative. Short time measurements (T, RH, CO2, Radon, airborne dust, sedimented dust, lighting, microorganisms) will be performed, using static sensors able to describe the status of the indoor air environment, together with user surveys (subjective data - health symptoms and indoor environmental factors) and visual assessment of buildings and technical installations. In particular, the CivicFlow platform developed by U-Hopper (www.civicflow.com/) will be exploited as a civic engagement platform for the Oslo school case study, to receive the subjective perception from the users. The general underlying idea of CivicFlow is that citizens can act as mobile and pervasive sensors, performing various sensing tasks related to the surrounding environment. This includes both the usage of rich built-in sensing capacities of smartphones or the usage of external sensors connected to the phone, such as Bluetooth connected personal health monitors, air quality sensors, etc. On the other side, sensing can be performed by directly inquiring people on their subjective perception of the environmental conditions. Acquisition of perceptions is organized in form of questionnaires (CivicFlow sensing tasks), distributed via web widgets (embedded into school portal), mobile web app paired with QR codes and mobile app. Andrei Tamilin, CTO of U-Hopper, explains:“From the technical perspective the platform is composed of a client side, which currently can run in a browser or as a stand-alone mobile app, and a back-end, which handles the execution of the campaign and the collection and analysis of data. A simple web interface allows customers to setup and manage civic engagement campaigns.” 3