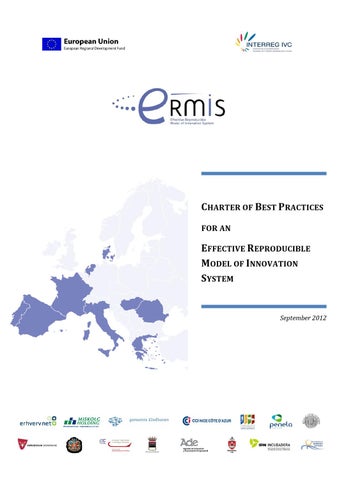 CHARTER OF BEST PRACTICES FOR AN

The ERMIS project has been made possible by the INTERREG IVC and Co-financed by the European Regional Development Fund. The contents reflect the authorâ&#x20AC;&#x2122;s views and the INTERREG IVC Managing Authority is not liable for any use that maybe made of the information.

The objective of this charter of best practices is to help partners in future projects understanding what a best practice is, and what the criteria to select transferable best practices to improve innovation policy dedicated to SMEs in regions should be.

What is a best practice? The definition of a best practice is not obvious. This question proved relevant to partners when they had to select the practices they would propose to transfer to other regions. The question is 1) which practice already implemented might be worthwhile selecting; 2) what are the evidences showing that the practice proved useful to the region 3) is the practice possible to transfer and according to which conditions for adding value to the receiving region. Practices that were initially selected showed interesting characteristics but others were missing justifying the decision to stop the transfer process. For instance, some

implementation or because of very good prospective results, but ended up with few or no intention of transfer due to the lack of clear evidence of effectiveness in regard with the initial objective of the implementation. Further, some practices initially selected were so context dependent or so complex to implement that the value for other partners revealed questionable. The ERMIS model enabled addressing these questions, and facilitated the selection process by evidencing the extent to which the practice would fit with the SWOT analysis: Did it strengthen innovative capacities of the region or did it facilitate seizing opportunities on the one hand, or did it addressed key weaknesses or threat faced by the receiving region. In other words, the ERMIS model revealed the value added by a practice to the partner regions. Thus, a â&#x20AC;&#x153;best practiceâ&#x20AC;? is a practice that brings value to a territory. The value could be : business increase or diversification, job creation or job repositioning, research and innovation enhancement, culture development, infrastructure improvement, network building, student number increaseâ&#x20AC;Ś. To evidence the value created, the practice must have been successfully experimented in the transferor partner region, and be related to at least one dimension of the SWOT analysis of both the transferor and the transferees.

Then, specificities and context dependence of the practice should be clearly stated in order to highlight the scope and the breadth of its application.

How should best practices be selected? We identified four main criteria for a best practice to be transferred successfully and then giving rise to a likely implementation

1. Specificity: A practice can be more or less specific to an industry context or to an application, which directly conditions its attractiveness and its usefulness. While some practices proved very specific –such as Mecatronic– others, such as Ecobiz, are general purpose and could be applied in various contexts. The level of specificity significantly affects the attractiveness of the BP. For instance, the Creative Conversion Factory (CCF), supported by the Brainport-Eindhoven partner, is an initiative to recycle potentially valuable ideas that are ‘locked away’ in cabinets and drawers of a large company like Philips. The idea is to re-use unused IP and try generating sustainable business propositions for products and/or services. While interesting, this practice is deeply dependent on 1) the presence of at least a large company willing to contribute (by giving access to unused IP) and 2) that ideas are patented or copyrighted (then only possible is some industries). The level of specificity is critically related to the adaptability of the practice. To evaluate the adaptability of the practice, the question is to know the extent to which the success of implementation is dependent on 

Then, the more specific a business is the more critical the distance is going to be between transferor and transferee partner region. In other words, specific practices will be much more difficult and costly to transfer if the transferor and the

transfereeâ&#x20AC;&#x2122;s region do not share similar or close contexts as defined in the ERMIS model. To address this issue properly, receiving partners should clearly estimate the distance between the level of specificity of their region with that of the transferor partners as underlined in the ERMIS analytical process.

performance shown by the practice in the transferor partner region after implementation. The level of reproducibility relies on two dimensions: a. The complexity of implementation: complexity affects the ability to implement the practice, and then its attractiveness. Complexity of implementation can be due to a technical complexity if it relies on infrastructures or on a myriad of technical elements that have to be integrated together for instance. However, most often, complexity comes from the number of stakeholders and institutions that have to be involved in the implementation process. One of the most significant barriers to implementation reported by partners is the inability of local institutions and policy makers to provide a coherent coordination. Effective institutions manage to overcome local conflicts of interest and contribute to the convergence of representations of objectives to achieve, of the resources to be allocated and of the procedure to implement. The study of the local governance (supra and infra-structural analyses) in the SWOT analysis is a critical step to the selection of the best practices to be transferred. b. The cost of implementation: practices requiring heavy investment are more risky to implement. There are two reasons why costs may be high: infrastructure and human capital. In the selection process, potential receiving partners must anticipate the required allocation of resources. The cost dimension often comes as an amplifier of complexity: generally the higher the cost, the higher the number and the diversity of stakeholders to convince for a successful implementation. c. Thus, practices can be evaluated along a reproducibility spectrum going from â&#x20AC;&#x153;plug and playâ&#x20AC;? practices (such as Ecobiz as developed by the Chamber of Commerce of Nice Shophia Antipolis) that are easy to implement -because they rely on a limited number of persons and/or institutions and do not necessarily require sophisticated technologies or

heavy investments, to complex initiatives such as the creation of an incubator requiring heavy infrastructures, such as buildings, a set of services and a fine coordination among stakeholders such as universities, research institutions local and regional authorities etc.

3. Impact: The extent to which implementation is likely to be conducive to positive impacts on the local innovation system is a critical but difficult question. Impact results from two dimensions. a. The first dimension is the diffusion of the practice. How many companies, institutions or people are actually using the practice? This dimension relies on the level of specificity of the practice of course. Ecobiz -a plateform of exchange and communication across business actors of the region- is more likely to be diffused than the Robert Bosch Department of Mechatronic -a university programme dedicated to the deployment and the diffusion of the mechatronics expertise among students and companies in the region. The relevant indicator is then the number of players actually involved relative to the total number of potential players targeted by the initiative in the transferor region. Thus, even very specific practices such as the Robert Bosch Department of Mechatronic can be evaluated by the number of students and companies participating in the programme. b. The second dimension is the effectiveness of the practice regarding initial objectives. For instance, the Robert Bosch Department of Mecatronic was clearly set up to help increasing the level of human capital of local mechatronic

effectiveness dimension of this practice could be the evolution of employees trained and educated in the region. Similarly, if Ecobiz is easy to deploy, the impact of the practice can be evaluated by measuring the number of users and the number of initiatives generated by means of interactions through the platform. As a consequence, partners considering best practices that could become transferable to other region should clearly show evidence of effectiveness by stating the achieved results compared to initial objectives. In the ERMIS project, partners were requested to clearly explain the extent to which the selected practice enabled the region to address one dimension of the SWOT. Partners were also asked to answer a questionnaire listing the practices they had selected, the reason why they chose to select those

4. Synergies with existing practices: This last criterion proved probably the most critical one in the decision to transfer and implement a best practice. The risk of implementing a practice that potentially complements practices or initiatives already in place or planned, reduces dramatically. It follows that the question of synergies must be specifically considered for complex or costly practices. When observing the transfer process, the likelihood of implementation significantly increases when synergies occur between the best practice and existing practices to potentially form a platform of services. It also happened that several practices where transferred together to initiate a platform when they prove to complement each other. 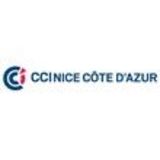