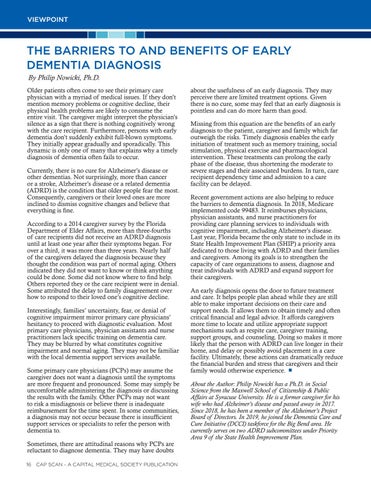 THE BARRIERS TO AND BENEFITS OF EARLY DEMENTIA DIAGNOSIS By Philip Nowicki, Ph.D. Older patients often come to see their primary care physician with a myriad of medical issues. If they don’t mention memory problems or cognitive decline, their physical health problems are likely to consume the entire visit. The caregiver might interpret the physician’s silence as a sign that there is nothing cognitively wrong with the care recipient. Furthermore, persons with early dementia don’t suddenly exhibit full-blown symptoms. They initially appear gradually and sporadically. This dynamic is only one of many that explains why a timely diagnosis of dementia often fails to occur. Currently, there is no cure for Alzheimer’s disease or other dementias. Not surprisingly, more than cancer or a stroke, Alzheimer’s disease or a related dementia (ADRD) is the condition that older people fear the most. Consequently, caregivers or their loved ones are more inclined to dismiss cognitive changes and believe that everything is fine. According to a 2014 caregiver survey by the Florida Department of Elder Affairs, more than three-fourths of care recipients did not receive an ADRD diagnosis until at least one year after their symptoms began. For over a third, it was more than three years. Nearly half of the caregivers delayed the diagnosis because they thought the condition was part of normal aging. Others indicated they did not want to know or think anything could be done. Some did not know where to find help. Others reported they or the care recipient were in denial. Some attributed the delay to family disagreement over how to respond to their loved one’s cognitive decline. Interestingly, families’ uncertainty, fear, or denial of cognitive impairment mirror primary care physicians’ hesitancy to proceed with diagnostic evaluation. Most primary care physicians, physician assistants and nurse practitioners lack specific training on dementia care. They may be blurred by what constitutes cognitive impairment and normal aging. They may not be familiar with the local dementia support services available. Some primary care physicians (PCPs) may assume the caregiver does not want a diagnosis until the symptoms are more frequent and pronounced. Some may simply be uncomfortable administering the diagnosis or discussing the results with the family. Other PCPs may not want to risk a misdiagnosis or believe there is inadequate reimbursement for the time spent. In some communities, a diagnosis may not occur because there is insufficient support services or specialists to refer the person with dementia to. Sometimes, there are attitudinal reasons why PCPs are reluctant to diagnose dementia. They may have doubts 16

about the usefulness of an early diagnosis. They may perceive there are limited treatment options. Given there is no cure, some may feel that an early diagnosis is pointless and can do more harm than good. Missing from this equation are the benefits of an early diagnosis to the patient, caregiver and family which far outweigh the risks. Timely diagnosis enables the early initiation of treatment such as memory training, social stimulation, physical exercise and pharmacological intervention. These treatments can prolong the early phase of the disease, thus shortening the moderate to severe stages and their associated burdens. In turn, care recipient dependency time and admission to a care facility can be delayed. Recent government actions are also helping to reduce the barriers to dementia diagnosis. In 2018, Medicare implemented code 99483. It reimburses physicians, physician assistants, and nurse practitioners for providing care planning services to individuals with cognitive impairment, including Alzheimer’s disease. Last year, Florida became the only state to include in its State Health Improvement Plan (SHIP) a priority area dedicated to those living with ADRD and their families and caregivers. Among its goals is to strengthen the capacity of care organizations to assess, diagnose and treat individuals with ADRD and expand support for their caregivers. An early diagnosis opens the door to future treatment and care. It helps people plan ahead while they are still able to make important decisions on their care and support needs. It allows them to obtain timely and often critical financial and legal advice. It affords caregivers more time to locate and utilize appropriate support mechanisms such as respite care, caregiver training, support groups, and counseling. Doing so makes it more likely that the person with ADRD can live longer in their home, and delay or possibly avoid placement in a care facility. Ultimately, these actions can dramatically reduce the financial burden and stress that caregivers and their family would otherwise experience. About the Author: Philip Nowicki has a Ph.D. in Social Science from the Maxwell School of Citizenship & Public Affairs at Syracuse University. He is a former caregiver for his wife who had Alzheimer’s disease and passed away in 2017. Since 2018, he has been a member of the Alzheimer’s Project Board of Directors. In 2019, he joined the Dementia Care and Cure Initiative (DCCI) taskforce for the Big Bend area. He currently serves on two ADRD subcommittees under Priority Area 9 of the State Health Improvement Plan.