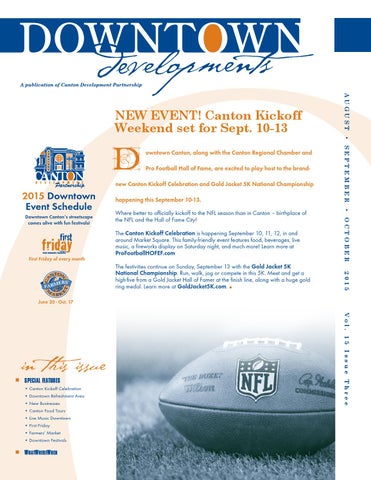 owntown Canton, along with the Canton Regional Chamber and Pro Football Hall of Fame, are excited to play host to the brand-

First Friday of every month

happening this September 10-13. Where better to officially kickoff to the NFL season than in Canton – birthplace of the NFL and the Hall of Fame City! The Canton Kickoff Celebration is happening September 10, 11, 12, in and around Market Square. This family-friendly event features food, beverages, live music, a fireworks display on Saturday night, and much more! Learn more at ProFootballHOFEF.com

The festivities continue on Sunday, September 13 with the Gold Jacket 5K National Championship. Run, walk, jog or compete in this 5K. Meet and get a high-five from a Gold Jacket Hall of Famer at the finish line, along with a huge gold ring medal. Learn more at GoldJacket5K.com.

Will an “outdoor refreshment area” be in downtown Canton’s future?

222 Market Ave. N. Canton, OH 44702 (330) 456-0468 fax (330) 452-7786 cdp@cantonchamber.org www.DowntownCanton.com Dennis P. Saunier President & CEO Michael P. Gill Director Annette Rosenberger Office Manager Denise Burton Membership Director Collyn Floyd Marketing Director & Editor Erin Thompson Downtown Events Manager Sarah Lutz Graphics Manager The Canton Development Partnership is a coalition of area development organizations and city government that share an interest in downtown Canton’s continual improvement, revitalization, image, and quality of life for its citizens. Its mission is to support and coordinate the activities and programs of its partner organizations in order to encourage and sustain community and economic development in downtown Canton. The partnering organizations include: Canton Regional Chamber of Commerce, Downtown Canton Special Improvement District, Downtown Canton Land Bank, Canton Tomorrow, Inc., and City of Canton. Information regarding downtown events and news can be submitted for reprint at the discretion of the Partnership director and publication editor. The Canton Development Partnership reserves the right to edit all copy. Deadlines are the 15th of the month, two months prior to publication (i.e., March 15 for the May/June/July issue). Statements of fact and opinion within Downtown Developments are the responsibility of the authors alone and do not imply the opinion of the members of Canton Development Partnership or its partnering organizations. Advertising rates and specifications are available by contacting the Chamber sales department at (330) 458-2067.

District (SID) and the City of

General Assembly that would allow municipal corporations and townships with populations of 50,000 or more to have two outdoor refreshment areas. Refreshment areas are spaces that would allow people to carry open containers of beer or spirits. The SID organized a committee to begin the process of understanding how this area could enhance the visitor experience downtown. The SID/COC has organized numerous meetings to discuss this legislation. Many people feel that the two refreshment areas

that should be considered are downtown and the Hall of Fame Village. Each area can be equal to 320 contiguous acres. The COC would be responsible for approving the Refreshment Area plan, which include determining boundaries, hours of operation, security, etc. Proponents of the legislation point to benefits such as increased downtown vitality, increase the number of people downtown and the creation of a walkable downtown core. The SID and the COC continue to meet to discuss the legislation. Many of the COC departments are now involved in reviewing the practical aspects of adopting an open container area in our center city. In the months ahead, COC administration and City Council will be weighing the merits of establishing a “Refreshment Area” in downtown Canton.

e’d like to welcome these fine businesses to our downtown community. Take a moment to get to know them, and better yet, go give them your patronage!

Downtown Yoga: 214 6th St. NW Downtown Yoga started with the vision of bringing a full-time Power Vinyasa Yoga studio to the downtown Canton Arts District. Classes are somewhat heated (78-80 degrees) and suited for all body types and skill levels, from beginner to expert. And, Monday through Friday, downtown professionals can enjoy the Lunch Crunch Power Yoga over their lunch hour. yogacanton.com Colette’s Vintage: 207 Sixth St. NW Colette Wasdahl is no stranger to downtown, having had a shop & studio on Walnut Ave. for several years. Now she’s moved and reopened in the arts district as Colette’s Vintage Clothing Store & Fashion Design Studio, with a bigger vintage selection than ever. Colette’s store offers vintage, redesigned, and custom clothing. colettesvintage.com IKON Illustration Gallery: 221 5th St NW (Opening at the Aug. 7th First Friday) IKON is the first gallery of its kind in the Midwest and will feature artwork from a national and regional roster of talent in the fantasy and science fiction genres. Most of the artists have had their work featured in pop cultural touchstones such as Magic: The Gathering, Dungeons and Dragons, DC Comics, LucasArts video games and more. ikonimagesgallery.com Chit Chat Coffee Shoppe: 220 Market Ave S Chit Chat is a delightful new coffee and sandwich shop in the Huntington Bank Building that stays busy selling to the needs of downtown workers. From tuna salad on a fresh croissant to iced peppermint patty coffee, Chit Chat offers a variety of delicious coffee drinks, paninis, soups, salads and more. chitchatcoffee.com (continued on next page ...)

Big congrats to downtown-based business Canton Food Tours on being awarded “Best Food Tour in Ohio Worth Traveling For” by Flipkey, a website operated by TripAdvisor. The award recognized the top food tour in each state, with the winner being selected based on user reviews and ratings on TripAdvisor.com. Canton Food Tours, owned and operated by Barb Abbott, ranks the highest among all food tours in Ohio. Canton Food Tours has reached over 4,000 people, both local and national, since its inception in 2012. The tours allow guests to explore the area’s rich history and culture, while enjoying a delicious array of food and drinks at top restaurants along the way.

Canton Rocks: LIVE MUSIC DOWNTOWN Live at Lunch Wednesdays at noon at Market Square in August and September, bring your lunch and enjoy a free outdoor concert sponsored by ArtsinStark and the Special Improvement District. Each week will feature a different artist including Saxy Rob, Scott Paris, Pat Masalko, and Ryan Humbert. Walk the Block: Live Music Saturdays Live Music is alive and well in downtown Canton every night of the week, but Saturday nights Cleveland Avenue is full of live music, art battles and comedians from 6-10pm. Grab dinner at one of our fine Arts District restaurants and then come Walk the Block through August.

August Theme: In the Zone It’s Canton’s biggest weekend and First Friday is ready! Come enjoy the sounds of the Ryan Humbert Band, Saxy Rob, and the bands covering Cleveland Avenue as part of the Brewed Roots Festival. There’s football chalk art, football themed art at Lynda Tuttle’s, inflatable fun on Market Square, and a beer garden on 4th street. PLUS all your favorite restaurants, art galleries, and specialty shops will be open and ready for business.

The Arts District gets groovy in September! Disco music and LOTS of color are what’s in store for September’s event. Participate in a fun collaborative art project, get a free caricature, and stroll the streets with your favorite dance partner. Catch a surprise on 4th street at 7:45!

First Friday celebrates its 100th edition with October’s event! Help celebrate with a special scavenger hunt to find 100 things in the arts district. Live music across downtown includes Pat Masalko, Andy Cyphert, and Scott Paris. The library will also offer a “create your own creepy crawlie” activity in celebration of National Friends of the Library week.

ate summer and fall is when many market-goers would say the Canton Farmers’ Market is at its finest!

The Canton Farmers’ Market is spread over 18 weeks, and late summer and fall bring some gorgeous color to the market’s selection. Each Saturday, shoppers can enjoy a cornucopia of latesummer and fall produce, including pumpkins, gourds, cooler fall crops, and everyone’s favorite – APPLES! Local selections including artisan breads, organic cheeses, grassfed beef, local honey, baked goods, jams & syrups, and much more are available Saturday mornings from 8 to 11:30 a.m. through October 17. The market is located in the Timken High School Parking Lot at the corner of Fourth St. NW and McKinley Ave NW. In addition to the 25+ vendors each week, there are weekly live music and activities, ranging from gardening and cooking tips, to make-andtake art for the kids. Visit www.CantonFarmersMarket.com for more information, a complete schedule of upcoming market events, and come out and join us before the market closes for the year! Be sure to say hello to our market coordinator, Denny Kinkead, who keeps our market running in tip-top shape every week, rain or shine! NOTE: In August, the market scheduled for Aug. 8 will be moved to Friday, Aug. 7 and held at Aultman Hospital. 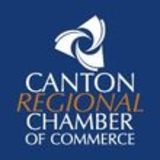