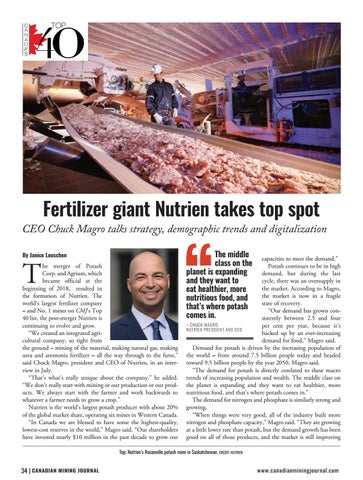 he merger of Potash Corp. and Agrium, which became ofﬁcial at the beginning of 2018, resulted in the formation of Nutrien. The world’s largest fertilizer company – and No. 1 miner on CMJ’s Top 40 list, the post-merger Nutrien is continuing to evolve and grow. “We created an integrated agricultural company, so right from the ground – mining of the material, making natural gas, making urea and ammonia fertilizer – all the way through to the farm,” said Chuck Magro, president and CEO of Nutrien, in an interview in July. “That’s what’s really unique about the company,” he added. “We don’t really start with mining or our production or our products. We always start with the farmer and work backwards to whatever a farmer needs to grow a crop.” Nutrien is the world’s largest potash producer with about 20% of the global market share, operating six mines in Western Canada. “In Canada we are blessed to have some the highest-quality, lowest-cost reserves in the world,” Magro said. “Our shareholders have invested nearly $10 million in the past decade to grow our

The middle class on the planet is expanding and they want to eat healthier, more nutritious food, and that’s where potash comes in.

capacities to meet the demand.” Potash continues to be in high demand, but during the last cycle, there was an oversupply in the market. According to Magro, the market is now in a fragile state of recovery. “Our demand has grown consistently between 2.5 and four – CHUCK M AGRO, per cent per year, because it’s NUTR IE N P RE SIDE NT AND CEO backed up by an ever-increasing demand for food,” Magro said. Demand for potash is driven by the increasing population of the world – from around 7.5 billion people today and headed toward 9.5 billion people by the year 2050, Magro said. “The demand for potash is directly corelated to these macro trends of increasing population and wealth. The middle class on the planet is expanding and they want to eat healthier, more nutritious food, and that’s where potash comes in.” The demand for nitrogen and phosphate is similarly strong and growing. “When things were very good, all of the industry built more nitrogen and phosphate capacity,” Magro said. “They are growing at a little lower rate than potash, but the demand growth has been good on all of those products, and the market is still improving