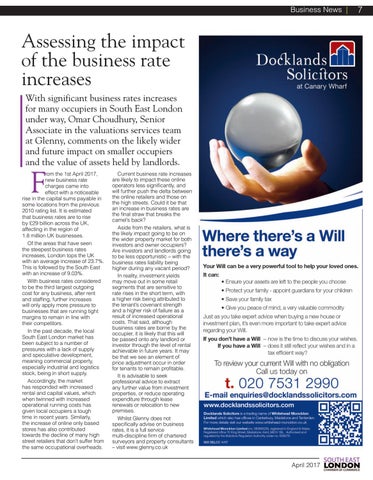 Assessing the impact of the business rate increases With significant business rates increases for many occupiers in South East London under way, Omar Choudhury, Senior Associate in the valuations services team at Glenny, comments on the likely wider and future impact on smaller occupiers and the value of assets held by landlords. rom the 1st April 2017, new business rate charges came into effect with a noticeable rise in the capital sums payable in some locations from the previous 2010 rating list. It is estimated that business rates are to rise by £29 billion across the UK, affecting in the region of 1.8 million UK businesses. Of the areas that have seen the steepest business rates increases, London tops the UK with an average increase of 23.7%. this is followed by the South East with an increase of 9.03%. With business rates considered to be the third largest outgoing cost for any business, after rent and stafﬁng, further increases will only apply more pressure to businesses that are running tight margins to remain in line with their competitors. In the past decade, the local South East London market has been subject to a number of pressures with a lack of supply and speculative development, meaning commercial property, especially industrial and logistics stock, being in short supply. Accordingly, the market has responded with increased rental and capital values, which when twinned with increased operational running costs has given local occupiers a tough time in recent years. Similarly, the increase of online only based stores has also contributed towards the decline of many high street retailers that don’t suffer from the same occupational overheads.

Current business rate increases are likely to impact these online operators less signiﬁcantly, and will further push the delta between the online retailers and those on the high streets. Could it be that an increase in business rates are the ﬁnal straw that breaks the camel’s back? Aside from the retailers, what is the likely impact going to be on the wider property market for both investors and owner occupiers? Are investors and landlords going to be less opportunistic – with the business rates liability being higher during any vacant period? In reality, investment yields may move out in some retail segments that are sensitive to rate rises in the short term, with a higher risk being attributed to the tenant’s covenant strength and a higher risk of failure as a result of increased operational costs. that said, although business rates are borne by the occupier, it is likely that this will be passed onto any landlord or investor through the level of rental achievable in future years. It may be that we see an element of price adjustment occur in order for tenants to remain proﬁtable. It is advisable to seek professional advice to extract any further value from investment properties, or reduce operating expenditure through lease renewals or relocation to new premises. Whilst Glenny does not speciﬁcally advise on business rates, it is a full service multi-discipline ﬁrm of chartered surveyors and property consultants – visit www.glenny.co.uk