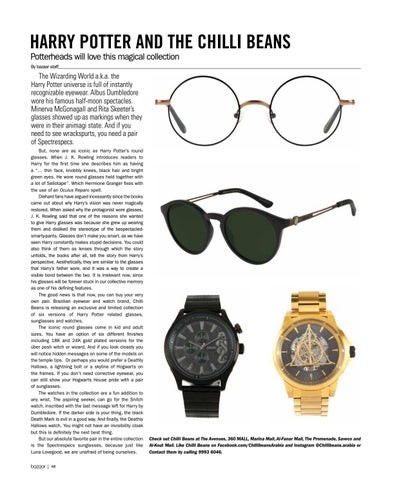 The Wizarding World a.k.a. the Harry Potter universe is full of instantly recognizable eyewear. Albus Dumbledore wore his famous half-moon spectacles. Minerva McGonagall and Rita Skeeter’s glasses showed up as markings when they were in their animagi state. And if you need to see wrackspurts, you need a pair of Spectrespecs. But, none are as iconic as Harry Potter’s round glasses. When J. K. Rowling introduces readers to Harry for the first time she describes him as having a “… thin face, knobbly knees, black hair and bright green eyes. He wore round glasses held together with a lot of Sellotape”. Which Hermione Granger fixes with the use of an Oculus Reparo spell. Diehard fans have argued incessantly since the books came out about why Harry’s vision was never magically restored. When asked why the protagonist wore glasses, J. K. Rowling said that one of the reasons she wanted to give Harry glasses was because she grew up wearing them and disliked the stereotype of the bespectacledsmarty-pants. Glasses don’t make you smart, as we have seen Harry constantly makes stupid decisions. You could also think of them as lenses through which the story unfolds, the books after all, tell the story from Harry’s perspective. Aesthetically, they are similar to the glasses that Harry’s father wore, and it was a way to create a visible bond between the two. It is irrelevant now, since his glasses will be forever stuck in our collective memory as one of his defining features. The good news is that now, you can buy your very own pair. Brazilian eyewear and watch brand, Chilli Beans is releasing an exclusive and limited collection of six versions of Harry Potter related glasses, sunglasses and watches. The iconic round glasses come in kid and adult sizes. You have an option of six different finishes including 18K and 24K gold plated versions for the über posh witch or wizard. And if you look closely you will notice hidden messages on some of the models on the temple tips. Or perhaps you would prefer a Deathly Hallows, a lightning bolt or a skyline of Hogwarts on the frames. If you don’t need corrective eyewear, you can still show your Hogwarts House pride with a pair of sunglasses. The watches in the collection are a fun addition to any wrist. The aspiring seeker, can go for the Snitch watch, inscribed with the last message left for Harry by Dumbledore. If the darker side is your thing, the black Death Mark is evil in a good way. And finally, the Deathly Hallows watch. You might not have an invisibility cloak but this is definitely the next best thing. But our absolute favorite pair in the entire collection is the Spectrespecs sunglasses, because just like Luna Lovegood, we are unafraid of being ourselves. 48

Check out Chilli Beans at The Avenues, 360 MALL, Marina Mall, Al-Fanar Mall, The Promenade, Saveco and Al-Kout Mall. Like Chilli Beans on Facebook.com/ChillibeansArabia and Instagram @Chillibeans.arabia or Contact them by calling 9993 6046. 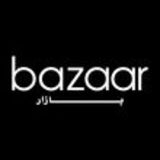 Gotta love K-Town in November! The weather is absolutely stunning. This is why we went cruising (top-down, of course) in the iconic Ferrari...

Gotta love K-Town in November! The weather is absolutely stunning. This is why we went cruising (top-down, of course) in the iconic Ferrari...