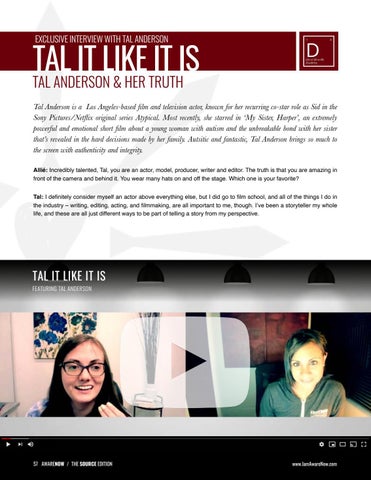 Tal Anderson is a Los Angeles-based film and television actor, known for her recurring co-star role as Sid in the Sony Pictures/Netflix original series Atypical. Most recently, she starred in ‘My Sister, Harper’, an extremely powerful and emotional short film about a young woman with autism and the unbreakable bond with her sister that’s revealed in the hard decisions made by her family. Autsitic and fantastic, Tal Anderson brings so much to the screen with authenticity and integrity.

Allié: Incredibly talented, Tal, you are an actor, model, producer, writer and editor. The truth is that you are amazing in front of the camera and behind it. You wear many hats on and off the stage. Which one is your favorite?

Tal: I definitely consider myself an actor above everything else, but I did go to film school, and all of the things I do in the industry – writing, editing, acting, and filmmaking, are all important to me, though. I’ve been a storyteller my whole life, and these are all just different ways to be part of telling a story from my perspective.