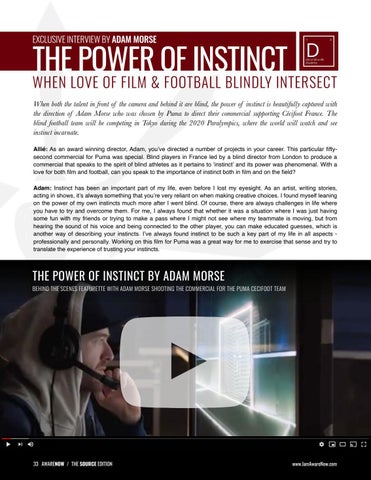 THE POWER OF INSTINCT

WHEN LOVE OF FILM &amp; FOOTBALL BLINDLY INTERSECT When both the talent in front of the camera and behind it are blind, the power of instinct is beautifully captured with the direction of Adam Morse who was chosen by Puma to direct their commercial supporting Cécifoot France. The blind football team will be competing in Tokyo during the 2020 Paralympics, where the world will watch and see instinct incarnate.

Allié: As an award winning director, Adam, you’ve directed a number of projects in your career. This particular fiftysecond commercial for Puma was special. Blind players in France led by a blind director from London to produce a commercial that speaks to the spirit of blind athletes as it pertains to ‘instinct’ and its power was phenomenal. With a love for both film and football, can you speak to the importance of instinct both in film and on the field?

Adam: Instinct has been an important part of my life, even before I lost my eyesight. As an artist, writing stories, acting in shows, it’s always something that you’re very reliant on when making creative choices. I found myself leaning on the power of my own instincts much more after I went blind. Of course, there are always challenges in life where you have to try and overcome them. For me, I always found that whether it was a situation where I was just having some fun with my friends or trying to make a pass where I might not see where my teammate is moving, but from hearing the sound of his voice and being connected to the other player, you can make educated guesses, which is another way of describing your instincts. I’ve always found instinct to be such a key part of my life in all aspects professionally and personally. Working on this film for Puma was a great way for me to exercise that sense and try to translate the experience of trusting your instincts.

THE POWER OF INSTINCT BY ADAM MORSE