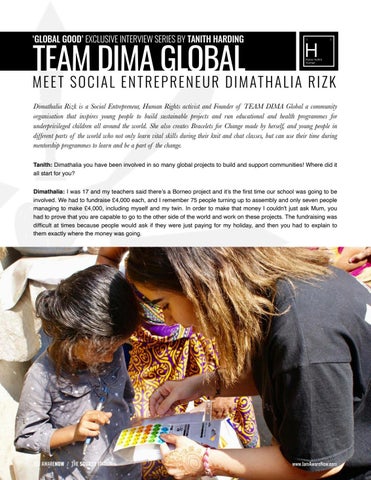 M E E T S O C I A L E N T R E P R E N E U R D I M AT H A L I A R I Z K Dimathalia Rizk is a Social Entrepreneur, Human Rights activist and Founder of TEAM DIMA Global a community organisation that inspires young people to build sustainable projects and run educational and health programmes for underprivileged children all around the world. She also creates Bracelets for Change made by herself, and young people in different parts of the world who not only learn vital skills during their knit and chat classes, but can use their time during mentorship programmes to learn and be a part of the change.

Tanith: Dimathalia you have been involved in so many global projects to build and support communities! Where did it all start for you?

Dimathalia: I was 17 and my teachers said there’s a Borneo project and it’s the first time our school was going to be involved. We had to fundraise £4,000 each, and I remember 75 people turning up to assembly and only seven people managing to make £4,000, including myself and my twin. In order to make that money I couldn&#39;t just ask Mum, you had to prove that you are capable to go to the other side of the world and work on these projects. The fundraising was difficult at times because people would ask if they were just paying for my holiday, and then you had to explain to them exactly where the money was going.