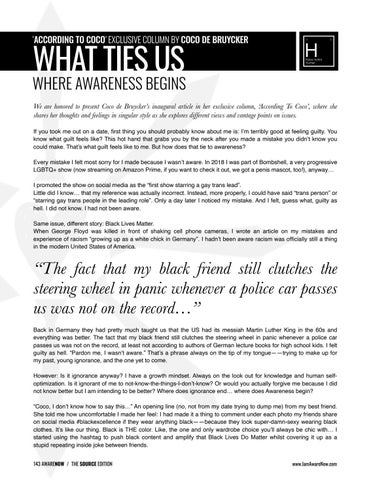 ‘ACCORDING TO COCO’ EXCLUSIVE COLUMN BY COCO DE BRUYCKER

We are honored to present Coco de Bruycker’s inaugural article in her exclusive column, ‘According To Coco’, where she shares her thoughts and feelings in singular style as she explores different views and vantage points on issues.

If you took me out on a date, first thing you should probably know about me is: I’m terribly good at feeling guilty. You know what guilt feels like? This hot hand that grabs you by the neck after you made a mistake you didn’t know you could make. That’s what guilt feels like to me. But how does that tie to awareness?    Every mistake I felt most sorry for I made because I wasn’t aware. In 2018 I was part of Bombshell, a very progressive LGBTQ+ show (now streaming on Amazon Prime, if you want to check it out, we got a penis mascot, too!), anyway…    I promoted the show on social media as the “first show starring a gay trans lead”.

Little did I know… that my reference was actually incorrect. Instead, more properly, I could have said “trans person” or “starring gay trans people in the leading role”. Only a day later I noticed my mistake. And I felt, guess what, guilty as hell. I did not know. I had not been aware.

When George Floyd was killed in front of shaking cell phone cameras, I wrote an article on my mistakes and experience of racism “growing up as a white chick in Germany”. I hadn’t been aware racism was officially still a thing in the modern United States of America.

Back in Germany they had pretty much taught us that the US had its messiah Martin Luther King in the 60s and everything was better. The fact that my black friend still clutches the steering wheel in panic whenever a police car passes us was not on the record, at least not according to authors of German lecture books for high school kids. I felt guilty as hell. “Pardon me, I wasn’t aware.” That’s a phrase always on the tip of my tongue——trying to make up for my past, young ignorance, and the one yet to come.

However: Is it ignorance anyway? I have a growth mindset. Always on the look out for knowledge and human selfoptimization. Is it ignorant of me to not-know-the-things-I-don’t-know? Or would you actually forgive me because I did not know better but I am intending to be better? Where does ignorance end… where does Awareness begin?    “Coco, I don’t know how to say this…” An opening line (no, not from my date trying to dump me) from my best friend. She told me how uncomfortable I made her feel: I had made it a thing to comment under each photo my friends share on social media #blackexcellence if they wear anything black——because they look super-damn-sexy wearing black clothes. It’s like our thing. Black is THE color. Like, the one and only wardrobe choice you’ll always be chic with… I started using the hashtag to push black content and amplify that Black Lives Do Matter whilst covering it up as a stupid repeating inside joke between friends. 143 AWARENOW / THE SOURCE EDITION