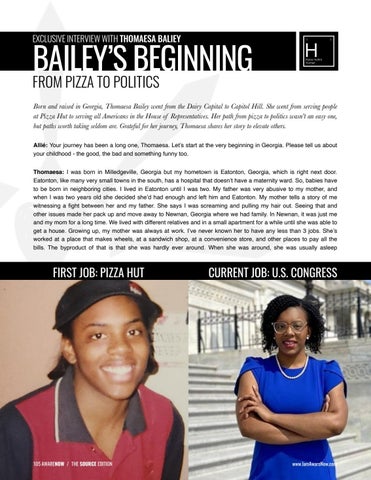 FROM PIZZA TO POLITICS

Born and raised in Georgia, Thomaesa Bailey went from the Dairy Capital to Capitol Hill. She went from serving people at Pizza Hut to serving all Americans in the House of Representatives. Her path from pizza to politics wasn’t an easy one, but paths worth taking seldom are. Grateful for her journey, Thomaesa shares her story to elevate others.

Allié: Your journey has been a long one, Thomaesa. Let’s start at the very beginning in Georgia. Please tell us about your childhood - the good, the bad and something funny too.

Thomaesa: I was born in Milledgeville, Georgia but my hometown is Eatonton, Georgia, which is right next door. Eatonton, like many very small towns in the south, has a hospital that doesn’t have a maternity ward. So, babies have to be born in neighboring cities. I lived in Eatonton until I was two. My father was very abusive to my mother, and when I was two years old she decided she’d had enough and left him and Eatonton. My mother tells a story of me witnessing a fight between her and my father. She says I was screaming and pulling my hair out. Seeing that and other issues made her pack up and move away to Newnan, Georgia where we had family. In Newnan, it was just me and my mom for a long time. We lived with different relatives and in a small apartment for a while until she was able to get a house. Growing up, my mother was always at work. I’ve never known her to have any less than 3 jobs. She’s worked at a place that makes wheels, at a sandwich shop, at a convenience store, and other places to pay all the bills. The byproduct of that is that she was hardly ever around. When she was around, she was usually asleep