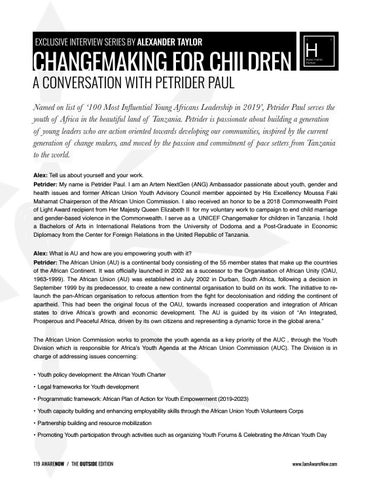 A CONVERSATION WITH PETRIDER PAUL

Named on list of ‘100 Most Influential Young Africans Leadership in 2019’, Petrider Paul serves the youth of Africa in the beautiful land of Tanzania. Petrider is passionate about building a generation of young leaders who are action oriented towards developing our communities, inspired by the current generation of change makers, and moved by the passion and commitment of pace setters from Tanzania to the world.

Alex: Tell us about yourself and your work.

Petrider: My name is Petrider Paul. I am an Artem NextGen (ANG) Ambassador passionate about youth, gender and health issues and former African Union Youth Advisory Council member appointed by His Excellency Moussa Faki Mahamat Chairperson of the African Union Commission. I also received an honor to be a 2018 Commonwealth Point of Light Award recipient from Her Majesty Queen Elizabeth II for my voluntary work to campaign to end child marriage and gender-based violence in the Commonwealth. I serve as a UNICEF Changemaker for children in Tanzania. I hold a Bachelors of Arts in International Relations from the University of Dodoma and a Post-Graduate in Economic Diplomacy from the Center for Foreign Relations in the United Republic of Tanzania.

Alex: What is AU and how are you empowering youth with it?

Petrider: The African Union (AU) is a continental body consisting of the 55 member states that make up the countries of the African Continent. It was officially launched in 2002 as a successor to the Organisation of African Unity (OAU, 1963-1999). The African Union (AU) was established in July 2002 in Durban, South Africa, following a decision in September 1999 by its predecessor, to create a new continental organisation to build on its work. The initiative to relaunch the pan-African organisation to refocus attention from the fight for decolonisation and ridding the continent of apartheid. This had been the original focus of the OAU, towards increased cooperation and integration of African states to drive Africa’s growth and economic development. The AU is guided by its vision of “An Integrated, Prosperous and Peaceful Africa, driven by its own citizens and representing a dynamic force in the global arena.”

119 AWARENOW / THE OUTSIDE EDITION