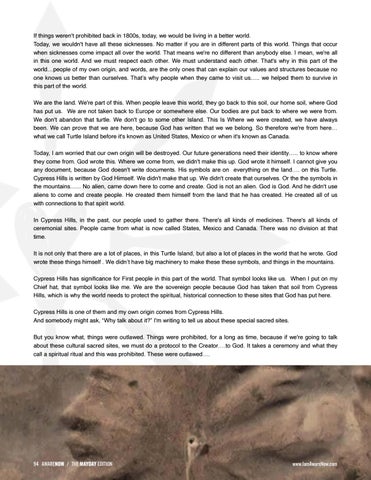 If things weren't prohibited back in 1800s, today, we would be living in a better world.

Today, we wouldn't have all these sicknesses. No matter if you are in different parts of this world. Things that occur when sicknesses come impact all over the world. That means we're no different than anybody else. I mean, we're all in this one world. And we must respect each other. We must understand each other. That's why in this part of the world…people of my own origin, and words, are the only ones that can explain our values and structures because no one knows us better than ourselves. That’s why people when they came to visit us….. we helped them to survive in this part of the world.

We are the land. We're part of this. When people leave this world, they go back to this soil, our home soil, where God has put us. We are not taken back to Europe or somewhere else. Our bodies are put back to where we were from. We don't abandon that turtle. We don't go to some other Island. This Is Where we were created, we have always been. We can prove that we are here, because God has written that we we belong. So therefore we're from here… what we call Turtle Island before it's known as United States, Mexico or when it's known as Canada.

Today, I am worried that our own origin will be destroyed. Our future generations need their identity….. to know where they come from. God wrote this. Where we come from, we didn't make this up. God wrote it himself. I cannot give you any document, because God doesn't write documents. His symbols are on everything on the land…. on this Turtle. Cypress Hills is written by God Himself. We didn't make that up. We didn't create that ourselves. Or the the symbols in the mountains…... No alien, came down here to come and create. God is not an alien. God is God. And he didn't use aliens to come and create people. He created them himself from the land that he has created. He created all of us with connections to that spirit world.

It is not only that there are a lot of places, in this Turtle Island, but also a lot of places in the world that he wrote. God wrote these things himself . We didn’t have big machinery to make these these symbols, and things in the mountains.

And somebody might ask, “Why talk about it?” I'm writing to tell us about these special sacred sites.

But you know what, things were outlawed. Things were prohibited, for a long as time, because if we're going to talk about these cultural sacred sites, we must do a protocol to the Creator….to God. It takes a ceremony and what they call a spiritual ritual and this was prohibited. These were outlawed….