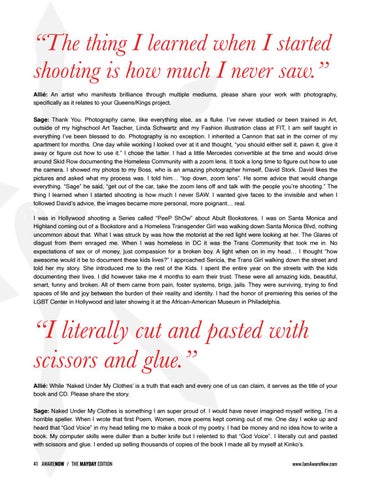 “The thing I learned when I started shooting is how much I never saw.”

Allié: An artist who manifests brilliance through multiple mediums, please share your work with photography, specifically as it relates to your Queens/Kings project.

Sage: Thank You. Photography came, like everything else, as a fluke. I’ve never studied or been trained in Art, outside of my highschool Art Teacher, Linda Schwartz and my Fashion illustration class at FIT, I am self taught in everything I’ve been blessed to do. Photography is no exception. I inherited a Cannon that sat in the corner of my apartment for months. One day while working I looked over at it and thought, “you should either sell it, pawn it, give it away or figure out how to use it.” I chose the latter. I had a little Mercedes convertible at the time and would drive around Skid Row documenting the Homeless Community with a zoom lens. It took a long time to figure out how to use the camera. I showed my photos to my Boss, who is an amazing photographer himself, David Stork. David likes the pictures and asked what my process was. I told him… “top down, zoom lens”. He some advice that would change everything. “Sage” he said, “get out of the car, take the zoom lens off and talk with the people you’re shooting.” The thing I learned when I started shooting is how much I never SAW. I wanted give faces to the invisible and when I followed David’s advice, the images became more personal, more poignant… real.

I was in Hollywood shooting a Series called “PeeP ShOw” about Abult Bookstores, I was on Santa Monica and Highland coming out of a Bookstore and a Homeless Transgender Girl was walking down Santa Monica Blvd, nothing uncommon about that. What I was struck by was how the motorist at the red light were looking at her. The Glares of disgust from them enraged me. When I was homeless in DC it was the Trans Community that took me in. No expectations of sex or of money, just compassion for a broken boy. A light when on in my head… I thought “how awesome would it be to document these kids lives?” I approached Sericia, the Trans Girl walking down the street and told her my story. She introduced me to the rest of the Kids. I spent the entire year on the streets with the kids documenting their lives. I did however take me 4 months to earn their trust. These were all amazing kids, beautiful, smart, funny and broken. All of them came from pain, foster systems, brigs, jails. They were surviving, trying to find spaces of life and joy between the burden of their reality and identity. I had the honor of premiering this series of the LGBT Center in Hollywood and later showing it at the African-American Museum in Philadelphia.

“I literally cut and pasted with scissors and glue.”

Allié: While ‘Naked Under My Clothes’ is a truth that each and every one of us can claim, it serves as the title of your book and CD. Please share the story.

Sage: Naked Under My Clothes is something I am super proud of. I would have never imagined myself writing, I’m a horrible speller. When I wrote that first Poem, Women, more poems kept coming out of me. One day I woke up and heard that “God Voice” in my head telling me to make a book of my poetry. I had be money and no idea how to write a book. My computer skills were duller than a butter knife but I relented to that “God Voice”. I literally cut and pasted with scissors and glue. I ended up selling thousands of copies of the book I made all by myself at Kinko’s. 41 AWARENOW / THE MAYDAY EDITION