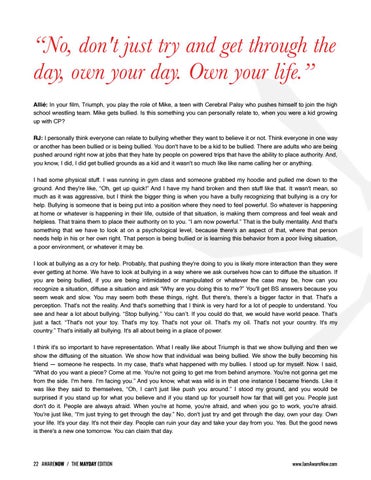 “No, don't just try and get through the day, own your day. Own your life.”

Allié: In your film, Triumph, you play the role of Mike, a teen with Cerebral Palsy who pushes himself to join the high school wrestling team. Mike gets bullied. Is this something you can personally relate to, when you were a kid growing up with CP?

RJ: I personally think everyone can relate to bullying whether they want to believe it or not. Think everyone in one way or another has been bullied or is being bullied. You don't have to be a kid to be bullied. There are adults who are being pushed around right now at jobs that they hate by people on powered trips that have the ability to place authority. And, you know, I did, I did get bullied grounds as a kid and it wasn't so much like like name calling her or anything.

I had some physical stuff. I was running in gym class and someone grabbed my hoodie and pulled me down to the ground. And they're like, “Oh, get up quick!” And I have my hand broken and then stuff like that. It wasn't mean, so much as it was aggressive, but I think the bigger thing is when you have a bully recognizing that bullying is a cry for help. Bullying is someone that is being put into a position where they need to feel powerful. So whatever is happening at home or whatever is happening in their life, outside of that situation, is making them compress and feel weak and helpless. That trains them to place their authority on to you. “I am now powerful.” That is the bully mentality. And that's something that we have to look at on a psychological level, because there's an aspect of that, where that person needs help in his or her own right. That person is being bullied or is learning this behavior from a poor living situation, a poor environment, or whatever it may be.

I look at bullying as a cry for help. Probably, that pushing they're doing to you is likely more interaction than they were ever getting at home. We have to look at bullying in a way where we ask ourselves how can to diffuse the situation. If you are being bullied, if you are being intimidated or manipulated or whatever the case may be, how can you recognize a situation, diffuse a situation and ask “Why are you doing this to me?” You'll get BS answers because you seem weak and slow. You may seem both these things, right. But there's, there’s a bigger factor in that. That's a perception. That's not the reality. And that's something that I think is very hard for a lot of people to understand. You see and hear a lot about bullying. “Stop bullying.” You can’t. If you could do that, we would have world peace. That's just a fact. “That's not your toy. That's my toy. That's not your oil. That's my oil. That's not your country. It's my country.” That's initially all bullying. It's all about being in a place of power.

I think it's so important to have representation. What I really like about Triumph is that we show bullying and then we show the diffusing of the situation. We show how that individual was being bullied. We show the bully becoming his friend — someone he respects. In my case, that's what happened with my bullies. I stood up for myself. Now. I said, “What do you want a piece? Come at me. You're not going to get me from behind anymore. You're not gonna get me from the side. I'm here. I'm facing you.” And you know, what was wild is in that one instance I became friends. Like it was like they said to themselves, “Oh, I can't just like push you around.” I stood my ground, and you would be surprised if you stand up for what you believe and if you stand up for yourself how far that will get you. People just don't do it. People are always afraid. When you're at home, you're afraid, and when you go to work, you're afraid. You're just like, “I'm just trying to get through the day.” No, don't just try and get through the day, own your day. Own your life. It's your day. It's not their day. People can ruin your day and take your day from you. Yes. But the good news is there's a new one tomorrow. You can claim that day.