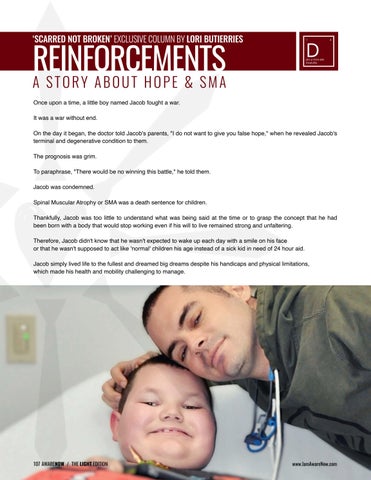 A STORY ABOUT HOPE &amp; SMA Once upon a time, a little boy named Jacob fought a war.

It was a war without end.

On the day it began, the doctor told Jacob&#39;s parents, &quot;I do not want to give you false hope,&quot; when he revealed Jacob&#39;s terminal and degenerative condition to them.

The prognosis was grim.

To paraphrase, &quot;There would be no winning this battle,&quot; he told them.

Spinal Muscular Atrophy or SMA was a death sentence for children.

Thankfully, Jacob was too little to understand what was being said at the time or to grasp the concept that he had been born with a body that would stop working even if his will to live remained strong and unfaltering.

Therefore, Jacob didn&#39;t know that he wasn&#39;t expected to wake up each day with a smile on his face

Jacob simply lived life to the fullest and dreamed big dreams despite his handicaps and physical limitations,

which made his health and mobility challenging to manage.