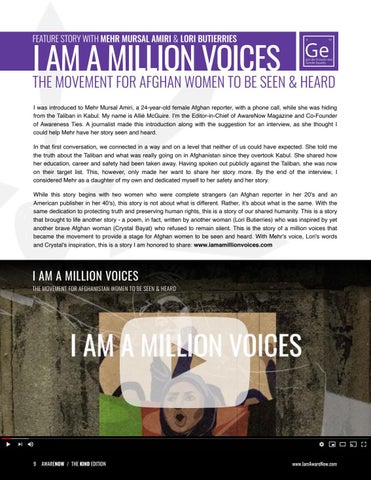 I AM A MILLION VOICES

THE MOVEMENT FOR AFGHAN WOMEN TO BE SEEN &amp; HEARD I was introduced to Mehr Mursal Amiri, a 24-year-old female Afghan reporter, with a phone call, while she was hiding from the Taliban in Kabul. My name is Allié McGuire. I&#39;m the Editor-in-Chief of AwareNow Magazine and Co-Founder of Awareness Ties. A journalist made this introduction along with the suggestion for an interview, as she thought I could help Mehr have her story seen and heard.

In that first conversation, we connected in a way and on a level that neither of us could have expected. She told me the truth about the Taliban and what was really going on in Afghanistan since they overtook Kabul. She shared how her education, career and safety had been taken away. Having spoken out publicly against the Taliban, she was now on their target list. This, however, only made her want to share her story more. By the end of the interview, I considered Mehr as a daughter of my own and dedicated myself to her safety and her story.

While this story begins with two women who were complete strangers (an Afghan reporter in her 20&#39;s and an American publisher in her 40&#39;s), this story is not about what is different. Rather, it&#39;s about what is the same. With the same dedication to protecting truth and preserving human rights, this is a story of our shared humanity. This is a story that brought to life another story - a poem, in fact, written by another woman (Lori Butierries) who was inspired by yet another brave Afghan woman (Crystal Bayat) who refused to remain silent. This is the story of a million voices that became the movement to provide a stage for Afghan women to be seen and heard. With Mehr&#39;s voice, Lori&#39;s words and Crystal&#39;s inspiration, this is a story I am honored to share: www.iamamillionvoices.com

I AM A MILLION VOICES

THE MOVEMENT FOR AFGHANISTAN WOMEN TO BE SEEN &amp; HEARD