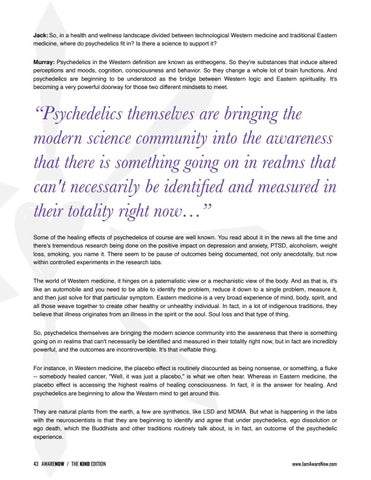 Jack: So, in a health and wellness landscape divided between technological Western medicine and traditional Eastern medicine, where do psychedelics fit in? Is there a science to support it?

Murray: Psychedelics in the Western definition are known as entheogens. So they&#39;re substances that induce altered perceptions and moods, cognition, consciousness and behavior. So they change a whole lot of brain functions. And psychedelics are beginning to be understood as the bridge between Western logic and Eastern spirituality. It&#39;s becoming a very powerful doorway for those two different mindsets to meet.

“Psychedelics themselves are bringing the modern science community into the awareness that there is something going on in realms that can&#39;t necessarily be identified and measured in their totality right now…”

Some of the healing effects of psychedelics of course are well known. You read about it in the news all the time and there&#39;s tremendous research being done on the positive impact on depression and anxiety, PTSD, alcoholism, weight loss, smoking, you name it. There seem to be pause of outcomes being documented, not only anecdotally, but now within controlled experiments in the research labs.

The world of Western medicine, it hinges on a paternalistic view or a mechanistic view of the body. And as that is, it&#39;s like an automobile and you need to be able to identify the problem, reduce it down to a single problem, measure it, and then just solve for that particular symptom. Eastern medicine is a very broad experience of mind, body, spirit, and all those weave together to create other healthy or unhealthy individual. In fact, in a lot of indigenous traditions, they believe that illness originates from an illness in the spirit or the soul. Soul loss and that type of thing.

So, psychedelics themselves are bringing the modern science community into the awareness that there is something going on in realms that can&#39;t necessarily be identified and measured in their totality right now, but in fact are incredibly powerful, and the outcomes are incontrovertible. It&#39;s that ineffable thing.

For instance, in Western medicine, the placebo effect is routinely discounted as being nonsense, or something, a fluke -- somebody healed cancer, &quot;Well, it was just a placebo,&quot; is what we often hear. Whereas in Eastern medicine, the placebo effect is accessing the highest realms of healing consciousness. In fact, it is the answer for healing. And psychedelics are beginning to allow the Western mind to get around this.

They are natural plants from the earth, a few are synthetics, like LSD and MDMA. But what is happening in the labs with the neuroscientists is that they are beginning to identify and agree that under psychedelics, ego dissolution or ego death, which the Buddhists and other traditions routinely talk about, is in fact, an outcome of the psychedelic experience.